What can you learn from a land record?

While working on Carrie’s Letters I found the following in one of her letters to her sister dated 27 March 1893, Baiting Hollow:
When I was transcribing this letter I wasn’t sure about the number of acres.  I had never looked for land deeds but thought this might be a good time to start.  While I was back visiting my family in New York I decided to go search out Suffolk County Land Deeds.  My father decided to go with me and we had quite an experience looking for a possible land deed that would match Carrie’s letter.  Here is what I finally found (and transcribed): 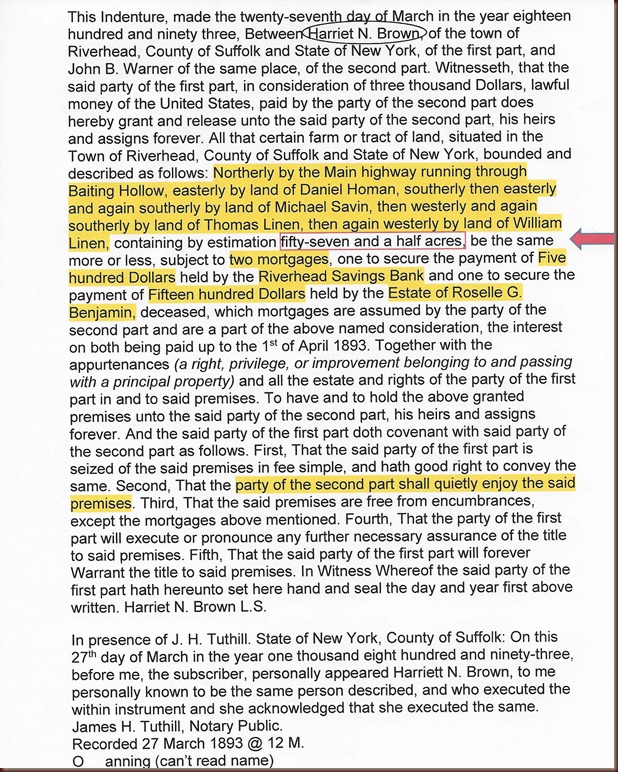 Once I had this transcribed I realized I was incorrect about the acreage.  It wasn’t 37 1/2 but rather 57 1/2 acres (see arrow)
I now know who my great grandfather bought the land from, a description of where the land is, who held the mortgages and what the conditions of the sale were.
I had a chuckle over the condition that they ‘shall quietly enjoy the said premises’.  I also chuckled at my great grandmother’s comment above that ‘if the man knows how to do it (farming)’ since John had been farming for years already just not on his ‘own’ land.  I also continuously get a hint of my great grandmother’s sense of humor in her letters.
So, there is a lot I was able to learn by looking at the land record.  I also like being able to confirm things that Carrie has talked about in her letters.
Please let me know if you have any information to add.  I would enjoy hearing from you.
Enjoy the journey,
Debby
Posted by Debby's Family Genealogy Blog at 6:39 PM No comments:

What I already knew:
My maternal grandmother was Nettie Emily Coolbaugh Cornell.  She was believed to have been born in Athens, Bradford County, PA in September 1882/1883.

I thought Portis was in the Civil War.  I was able to find on line a copy of his Application to the New York State Woman’s Relief Corps Home. Portis, at 66 years of age, filed his application in Genoa, Cayuga County, NY on 4 April 1910.  From that single document I was able to gather a lot of information.
Portis  was a Private in Company C, 107th Pennsylvania Volunteers.  He enlisted on 1 Mar 1862 and was discharged at the end of his term 2 Mar 1865 at Hatcher’s Run, VA.

He stated that while in the line of duty at Fetchers Chapel, near Falmouth, VA he was disabled after “contracted Pneumonia which left me with affected lungs and in the Summer of 1864 I had the second severe attack of Chronic Diarrhea which brought on Piles and disease of the Rectum which have troubled me ever since”.  “Since leaving the service he on July 1908 contracted by a fall was ruptured from which he is now suffering, and by reason of which he is unable to support himself by his own efforts and labor, that he therefore applies for admission to the New York State Woman’s Relief Corps Home.” (I was able to find information on the internet for the Battle of Fredricksburg, VA in December 1862.  Falmouth is across the river from Fredricksburg.)

The application states he did not own real estate or have a mortgage.  He had no yearly income.  He would start receiving a $14.00 per month pension, Certificate # 368477 payable at the Buffalo Agency commencing on the 12thg day of January 1910.
It looks like Portis and Harriet were both moving in to the Relief Corps Home.

The application also lists by great grandmother Mrs. Netta E. Cornell as a Patternmaker who lived at Atwater, NY R.D. 25

I also know by the application that my great great grandfather was able to sign his own name.

What I want to know:
What information would Portis’ Civil War Pension records have for me?  Ordered

Please let me know if you have any information that adds to my search.
Enjoy the journey,
Debby
Posted by Debby's Family Genealogy Blog at 9:15 PM 1 comment:


and Catherine Bolen (b. 1831 Gibraltar  d. 1891 New York City)
I try to enter information into my Legacy Family Tree program.  One of the many reasons I really like it is the chronology chart for 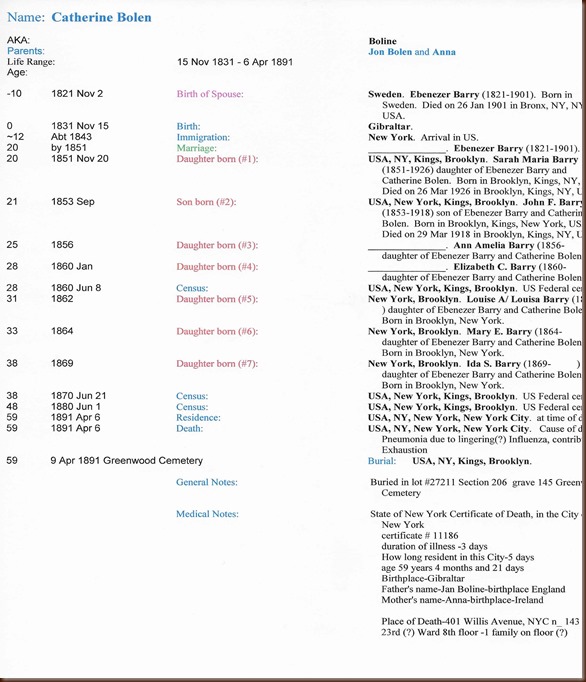 Some things I still don’t know about Ebenezer-what ship did Ebenezer come to the United States on, where was he born in Sweden, who were his parents?  What type of boat did he work on-did he do something during the Civil War?
Some things I still don’t know about Catherine-what ship did Catherine come to the United States on, did she come with her parents, was she born in Gibraltar, can I verify who were her parents?
I would love to find descendants of other children of Ebenezer and Catherine-John F., Ann Amelia, Elizabeth C., Louisa, Mary E., Ida S.
If you have any information that might add to my research I would enjoy hearing from you!
Enjoy the journey,
Debby

Posted by Debby's Family Genealogy Blog at 6:07 PM No comments:

When I was growing up all I ever knew about my great grandmother, Carrie Terry Warner, was that she died when my grandfather, Olin F. Warner, Sr. was a child.  She was someone that I never heard anyone talk about and I never asked.  I guess I thought since my grandfather was so young when she died he probably didn’t know that much or perhaps it was a sad subject and not one to be discussed.

So, I realized about 6 years ago that we had these letters…WOW!  What a great find.  I decided I needed to scan them and transcribe them.  Maybe if they were in chronological order and a print that was easy to read I would be able to get to know Carrie, my great grandmother.  It took my father and I several days to remove each letter from it’s envelope and scan them.  Then I began to transcribe each letter.  That seemed to take forever since pages of letters were not in order and she sometimes wrote side ways to use each inch of paper and on several pages she wrote her letter and then turned the page 90 degrees and wrote horizontally over the previous writing. 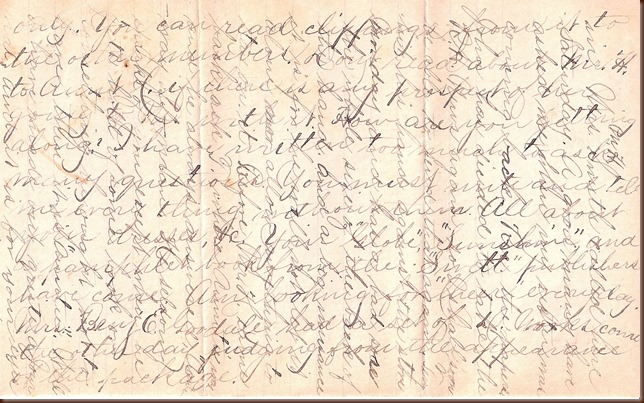 Thank goodness for technology and being able to enlarge and rotate a pdf page and lots of patience!  After I transcribed all the letters my son, Jason, helped me set up a ‘book format’ program that I could put each letter in to chronologically.  Great!  Now I thought I’ll go back and check each page for typing errors and I’m done, right?

Well, not so fast….I realized as I was reading the typed letters that I had tons of questions…who is that person she is talking about, that barn that burned down, the Post Office, what was that ‘Train Depot robbery’ she talked about, or that book that she was reading, to name a few.  I had set up my book format to have side bars.  Now the fun began.

To begin - handwritten on the oldest letter’s envelope was “ Found these letters in attic and this is oldest one.  From April 16, 1873 to this date would make Mother (Ella Terry Billard) 7 years and 1 month old to the day.  Was she writing letters then? This was answered by Carrie’s friend and school mate who must have been a local girl because in the fall they returned to school together by boat from Greenport to N.Y. R”  I believe the R referrs to Russell Billard, George and Ella Terry Billard’s son.
Now I can make the guess that Russell found the letters and gave them to my great grandfather John B. Warner for them to end up in his house in Aquebogue, NY. I can verify Ella was born 16 Apr 1873.  Who was the ‘local girl’ Russell referred to?  From reading the letters the first one dated 16 May 1880 was addressed to Ella and signed by Hannah.  Who is Hannah?  Russel said they traveled by boat to NY and then to Trenton, NJ for school.  So, I went to a local newspaper (Suffolk County Historic Newspapers) that is available digitally.  I was able to find the following;
Now I can verify that Carrie went to the Trenton Normal School in N.J. and that the ‘Hannah’ who wrote the letter to Ella was most likely Hannah King. I then went to the 1870 Census for Peconic, Suffolk County, New York and found:
I was able to find Tillie (researched ‘girl’s names 1860’ to see Tillie as the nickname for Matilda) listed in the 1880 census:

As I research information for Carrie’s Letters I sometimes make guesses.  I hope that I am putting enough research into my guesses so they are considered by others to be reasonably correct, valid guesses.  If anyone reading this has information to verify or correct a supposition I have made I would greatly appreciate hearing from you.