Riverhead, New York Soldiers in the War of 1812

While I was researching recently at the Suffolk County Historical Society in Riverhead, New York I came across the following rather unusual record in the Ackerly record set of notebooks, Volume 15, pages 142-144.  Mr. Ackerly went around the area and copied legal documents of the time before the County or State kept a copy of them.  Several of my ancestors are listed in this rather unusual and interesting document.  The document is dated 1813 and 1814, so, I am guessing this had to do with the War of 1812?  Time to do some historical research since I don’t remember anything about it except that this was a War with England and it was when the White House was burned.

musket photo from Military Heritage
The War of 1812- a few highlights for perspective:
I am not a historian and as in any conflict there are so many more issues than what I have listed above.  I can understand how towns along/near the waterways were at danger since this was a major Naval battle of the time. 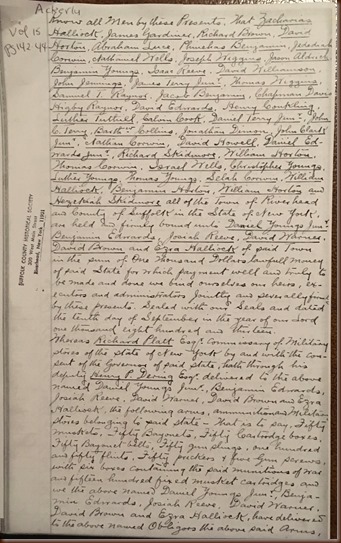 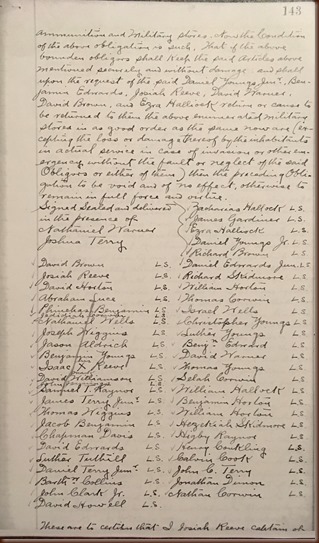 These are to certain that I Josiah Reeve captain of the exempt company have demanded and received of Joseph Wiggins the Gun and Accoutrements that were drawn from the Arsenal at Sag Harbor within mentioned.

I was able to find a website entitled 1812 History with additional information and great pictures of muskets, prickers, etc. from the time period.  I learned that a ‘pricker’ was a Y shaped musket tool that could be used as a screwdriver and to prick vent holes in the cartridge.

I believe the men whose names are in green lettering are my ancestors.  I am proud that they were ready to protect their families, the area of Riverhead and this relatively new country called America. It was interesting to learn what the men were given and how they were expected to care for their equipment.  I guess I should now check to see if any of them received pensions as a result of the War of 1812.  What an interesting document and an amazing find!