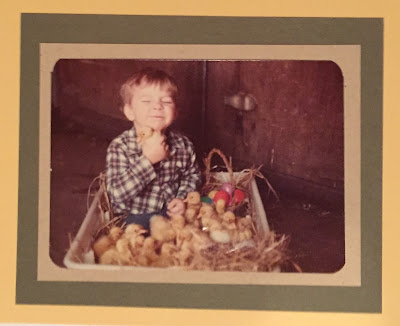 ﻿
Posted by Debby's Family Genealogy Blog at 6:33 AM No comments:

I thought I’d look at what information I have gathered for my maternal Great Grandmother, Nettie Coolbaugh Cornell.  What do I know about Nettie and what do I still want to find out?

Nettie is the daughter of Civil War Veteran Portis M. Coolbaugh and Harriett H. Browning Coolbaugh.  As best as I can figure out Nettie was born in August 1881 in Athens, Bradford County, Pennsylvania.

The following is from the collection entitled North America, Family Histories, 1500-2000 Daughters of the American Revolution Lineage Book Vol 303.  This collection reports that ‘'The Coolbaugh family in America, from their earliest appearance at New Amsterdam, 1686-1938”. 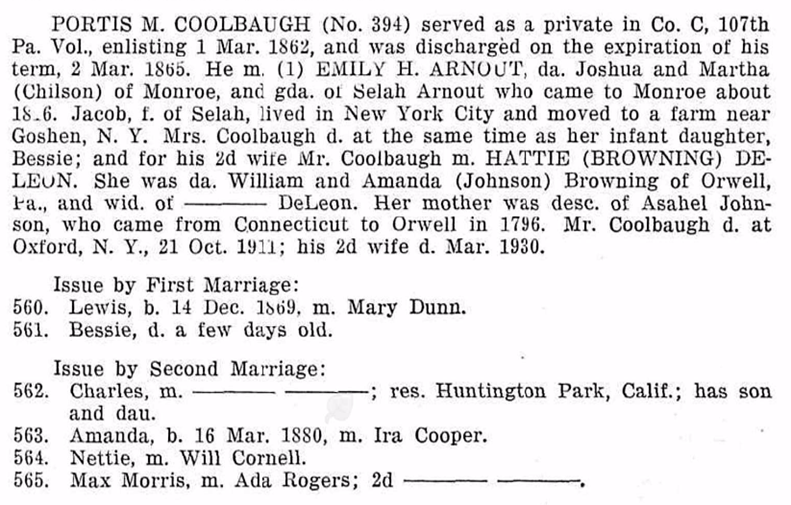 According to the New York State Census of 18 February 1892 I find Nettie and her family living in the Fourth Election District in the town of Barton, Tioga County, New York.

According to the US Federal Census on 8 January 1920 census  Nettie, William and children Arthur, Bessie, Earl, Ernest and my grandmother Edna were living in Spencer, Tioga County, New York.  They appear to be living next door to William’s mother Charlotte.  Nettie was working as a Servant for a Private Family. 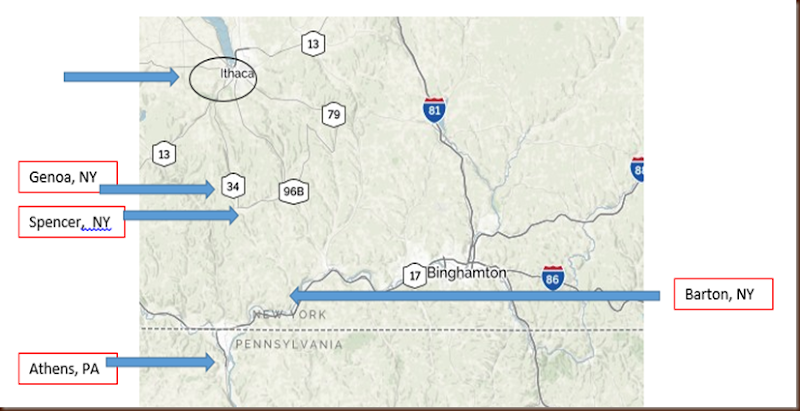 Looking at a map helped me realize that while Nettie moved a lot it was still within a relatively close area.

Nettie and William had 5 children:
I found a U.S., Social Security Applications and Claims Index, 1936-2007 for Netta Cornell which listed William and my grandmother Edna Cornell Hammond.  I wonder if this is because my grandmother was only 10 years old when her mother Nettie died.
Nettie died 19 February 1925, possibly in Spencer, Tioga, NY?  However, 3 months later in June I find the family in Ithaca, NY.

Definitely more research needed.  I have been unable online to locate a death certificate for Nettie or a birth certificate.  I will need to make calls to Tioga and Tompkins County NY Clerk’s office to see what I can find.

Posted by Debby's Family Genealogy Blog at 9:41 PM No comments:

Which Historical Societies Will You Join?

Have you ever wondered what’s involved in joining a historical society?

After finding out many years ago that I could claim I was a descendant of John and Priscilla (Mullin) Alden of the Mayflower I thought about joining the Mayflower Society and the Alden Kindred of America.  I am told that the Alden’s have the largest group of descendants.  Oh, but what would be involved in doing this?

Every year when I attend the Southern California Genealogy Jamboree I visit the Mayflower Society booth and pick up an application.  I get home and I put it in my ‘To Do’ pile and things get piled on top of it.  So, after putting off for many years beginning the application process I decided today was a good day to get things started.

OK, so while I was at it I decided to see about the application for  the Alden Kindred of America.  I  decided to Google the Alden Kindred of America and found their website.  First thing I did was join the group.  After I joined I also decided I should start of the process of certifying my Alden lineage.  Over the years I have been obtaining as much documentation as I can to verify my lineage.  I have put off joining for fear that I don’t have all the documentation I will need but I guess I won’t know until I try.


Here’s the form;
The Alden Kindred of America application I submitted electronically.  The Preliminary Review Form is completed and in it’s envelope ready for the mail.  I’ll let you know how things progress.  I would encourage all of you that have ancestry that leads back to the Pilgrims to apply also.

Interesting…yesterday while scrapbooking with a group I had the pleasure of meeting a woman, actually sitting across the table from me, who after a discussion that came up about genealogy realized we can both trace ancestry to John and Priscilla Alden.  You just never know who you will meet!  We both have the same first names and both were born back East but now live in San Diego, CA.  Now we need to compare notes and see which of John and Priscilla’s children she is descended from to see how closely we are related.

Photo Friday-Mystery Man, Who Are You? Solving a photo mystery

Saturday I was able to attend a full day seminar put on by the San Diego Genealogical Society where Maureen Taylor, The Photo Detective was the guest speaker.  I also had the privilege of a 15 minute private session prior to the seminar with Maureen.

One of the photos I brought to review with Maureen was this photo;

What I know;
My Dad’s cousin Geri sent me a copy of this photo and said she believed it was either the father or one of the brothers of my paternal Great Grandmother Sarah Rowan King.

One of the important things Maureen talked about was the research on the people you think may be in the photo.  When and where did they live?  What did they do as a profession?  What do you know about them?

I know that Sarah’s father was John William Rowan who was born in 1846, reportedly in Troy, ?.  John died in 1897 in Brooklyn, NY.
Sarah had 2 brothers that lived to adulthood-Joseph and William.
Maureen talked about researching the photographer of the picture.  When and where did they live.  Where was their studio.
Maureen thought the picture was from about 1925 to maybe 1935.
Maureen also talked about looking at how old the person in the photo is.
She could tell that the gentleman had blue eyes.  She asked me to send her a copy of the picture so she could investigate a little more.  She noticed the rolled up pants and the unusually shaped chair he’s sitting on with the animal skin to the side.


Another of Maureen’s r recommendations to us when we don’t know who is in a photo are to post the photo on Facebook, Dead Fred, a blog, etc. to get the photo out there to see if someone else might see it and recognize the photo.
Be sure to check out Maureen’s blog for Family Tree Magazine.
So, do you see a family resemblance?  I am hoping I followed Maureen’s suggestions correctly along with her amazing detective work to reach the conclusion that this is a photo of Joseph Rowan.  Now I need to find some of his descendants.
If the photo on the left is Joseph V. Rowan then the woman on the right is his mother Sarah Hughes Rowan.
A special thank-you to Maureen Taylor for helping me figure out who the man in the photo is.  While I can’t prove it I think I have made a good guess based on her help and suggestions.  Maybe Maureen will have some additional suggestions for me.
If you have any corrections or additions or stories to share I look forward to hearing them.
Enjoy the journey,
Debby

Posted by Debby's Family Genealogy Blog at 9:32 AM 4 comments:


In honor of Labor Day I decided to look at the unusual career of my great great Grandfather (Gilbert Terry) who was a Miller and found out about other Millers in the family. It’s amazing sometime what you can learn from a newspaper article and how it can enhance your family tree.

I knew that my great-great Grandfather Gilbert Terry had run the Old Mill in Peconic, NY for many years.  When I found this newspaper article about The Old Mill I learned more about Gilbert but also about several other Terry men in the family and their connections to Mill work.

I found this article in the Cutchogue-New Suffolk Free Library.  There is a Research Room that has local genealogy information that my parents took me to one time when I was visiting back East.  In this room was a treasure trove of binders.  There was a woman (wish I had written down her name)  from the area who over the years, long before computers, would cut out articles from the local newspaper and glue them on pieces of paper by family names.  Yes, now days I can search many of the newspapers on line from my home in California because they are digitized.  The search engines are pretty good, not perfect, and you can search by date but sometimes you have no idea what is out there to search for.  I have found numerous articles that I never would have known about if not for the wonderful gift this woman left for us.

Gilbert Terry was born in 25 June 1833 to Walter Franklin Terry and Eliza Ann Tooker Terry.  Gilbert had 5 brothers and 4 sisters.

From an article entitled “He Knew Peconic Mill” published in the Long Island Forum in September 1954 I learned more specifics about my great-great-grandfather’s career.  The following excepts help tell the story;
“…in 1872 the Coxes sold their holdings there to Capt. Joshua U. Terry who, after retiring from his seafaring life in 1847, conducted the Marttituck Mill for over twenty years.”

“The next miller at the Peconic mill after Cox and his son was Edward H. Terry who conducted it until the growing infirmities of age compelled his retirement.  He was succeeded by his brother Gilbert Terry who as the last miller there ran the Peconic mill for thirty-four years.  He gave up milling in 1902, and thereafter lived in Orient with his niece Mrs. Wilson L. Petty.”
Gilbert Terry married Almeda V. Robinson.  They had a daughter Ella who as Mrs. George Billard lived or lives at Cutchogue.  Joshua U. Terry who ran the Mattituck mill for over twenty years, dying about 1900, was a brother of Gilbert Terry.
“In these tide-water-mills the rising tide swept into the rock-walled channel through the open gates.  As the tidewater retreated the gates would close, storing the water in the creek for use when it flowed out, turning the big water wheel.”

“During his ownership of the Peconic mill, Gilbert Terry enlarged and improved it in the early 1870’s by adding an extension on the north side and putting a windmill wheel atop a tower.  The windmill much increased the efficiency of the plant as the tide-wheel would only operate during part of the fall of the tide, or some ten hours at most.”

“With the second set of stones installed, Terry ground over 200 bushels per day on numerous occasions.  His largest grind was 300 bushels, when he worked a greater part of twenty-four hours.”
In the 1880s they ground “wheat, corn and oats into flour, light and dark canaille, and meal for the kitchen and bran for the barn.”
“ During the 1880s Gilbert was reported as saying, “We are grinding a bushel a minute, using both tide and windmill.””

“…The Inlet windmill was destroyed during a great storm on November 26 and 27, 1898.  The wheel of the mill was blown to pieces and the wreckage left hanging.  One by one the few remaining sticks dropped before the wind until the standard stood alone.”
“By this time farmers had found it more profitable to grow potatoes and cauliflower than grain.  Consequently the amount of work brought to the mill rapidly decreased until finally the water-wheel was stopped to turn no more.”
For those of you regularly following my blog you may be interested in knowing that Gilbert Terry was the father of Carrie Terry Warner-Carrie's Letters.  See additional blog posts- Carrie's Letters.