My maternal great-grandmother Susan Bentz Hamman died in 1908 when my grandfather, James Jacob Hammond was just 5 years old.  (click on names to view their life stories) Both my maternal and paternal grandfathers lost their mothers at the very young age of 5. So young to suffer such loss.  (Additional information on Susan’s death can be found in the post entitled Which Information is Better?)

I found the following 2 obituaries in local newspapers:
From the Remsen Bell Enterprise newspaper, Friday, 29 May 1908, page 1 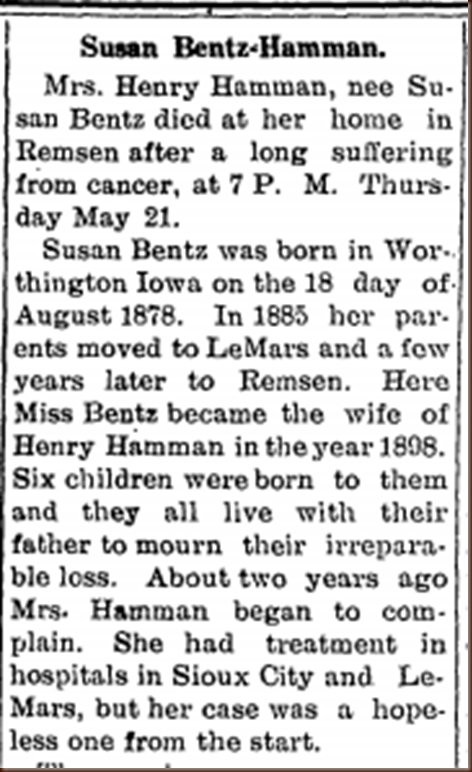 Susan Bentz Hamman
Mrs. Henry Hamman, nee Susan Bentz died at her home in Remsen after a long suffering from cancer, at 7 P.M. Thursday May 21.
Susan Bentz was born in Worthington Iowa on the 18th day of August 1878. In 1885 her parents moved to LeMars and a few years later to Remsen. Here Miss Bentz became the wife of Henry Hamman in the year 1898. Six children were born to them and they live with their father to mourn their irreparable loss. About two years ago Mrs. Hamman began to complain. She had treatment in hospitals in Sioux City and LeMars, but her case was a hopeless one from the start.

DEATH OF MRS. HAMMOND
Mrs. Henry Hammond died at the family home here last Thursday evening at 8 o'clock. She had been ill for nearly a year from the dread disease, cancer. She had been at Sioux City and LeMars twice in the hopes of obtaining relief but all treatment was in vain. In her death she leaves motherless six children, all less than nine years of age.
Susan Bentz was born in Worthington, Iowa, August 20, 1878. When 8 years old her parents moved to LeMars and later, about 16 years ago, they moved to Remsen. In 1898 she was married to Henry Hammond and to them six children were born which are now left without a mother-the best friend and most loving adviser anyone ever had. She also leaves to mourn her death a sister and three brothers: Mrs. Clara Rieling, of Emery; Jake Bentz, of Emery, S. D.; Henry Bentz, of Granville and John Bentz, of this town, all of which were present at the funeral which was held from St. Mary's church Saturday forenoon at 10 o'clock. The bereaved and motherless children have the sympathy of the community.


I found the following note in a Remsen newspaper and wondered if this is when Susan was in the Hospital in Sioux City and Henry Hamman, Susan’s husband, had gone to visit her?

Also from The Remsen News newspaper, Remsen, Iowa Thursday, 14 May 1908: 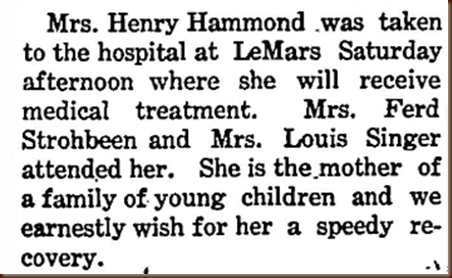 Additional information about Susan’s brother and her funeral from the Alton Democrat, Alton, Iowa 30 May 1908, page 1:

I am always interested in the information I can find and the inconsistencies I see in obituaries.  By looking at other articles in the newspaper I was able to find more then just facts to add to the story of Susan’s life.

Posted by Debby's Family Genealogy Blog at 4:05 PM No comments:

The Wedding of Henry Hamman and Susan Bentz 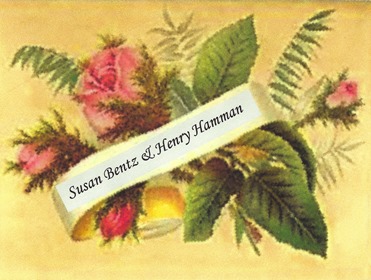 Today is the 121st Anniversary of the marriage of my maternal Great-Grandparents Susie Bentz and Henry Hamman.

This is the newspaper report of their wedding as found in The Remsen Weekly Bell on 14 October 1897 in the column Local Items:

If you have any corrections, additions or stories to share I look forward to hearing them.
Enjoy the journey,
Debby
Posted by Debby's Family Genealogy Blog at 4:07 PM No comments:

Earlier today Kitty Munson Cooper presented 2 engaging and informative sessions at the monthly meeting of the San Diego Genealogical Society.  Following Kitty’s presentations I thought I would go back and look at my DNA results and try out some of her many suggestions.


Kitty’s first presentation was entitled: I Tested My DNA How can it help my research?

Trying to understand all the information we are given when we do DNA testing can be daunting. Kitty discussed the ‘help’ out there for us from the testing companies we used as well as places like the ISOGG wiki or just ‘Googling’ our questions to find the places for answers.  After reminding us to download our DNA results from each company Kitty discussed uploading your results to several sites such as Promethease and GEDmatch.
Comparing our DNA results with others frequently helps us break through our brick walls.  Kitty talked about first recording DNA matches in our family trees to help document connections.

I picked a star Emoji that was available
Kitty emphasized starting with the closest matches as you begin to break down those brick walls.

As Kitty stated “Segment Triangulation is the standard by which we infer that a specific DNA segment is from a common ancestor that we share with at least two other people.”  With closer generations we can use charts that give us information about relationships based on the amount of shared DNA.  Determining common ancestors as we get back to great-great-grandparents, etc. there are so many more possibilities that this method becomes more difficult and ‘triangulation’ becomes a more necessary method.  This method takes time and organization of your raw data on spreadsheets, etc.

I still have so much to learn in the area of using DNA results to help me determine relationships of more distance matches.  I am by no means fluent in these areas and hope I have correctly documented some of what I learned today.

Be sure to check out Kitty’s blog at www.blog.kittycooper.com for detailed additional information.

Email ThisBlogThis!Share to TwitterShare to FacebookShare to Pinterest
Labels: DNA

The Life of Susan Bentz Hamman

Nothing was ever known about my maternal great-grandmother Susan Bentz Hamman.  My grandfather, living 1,200 miles away in upstate New York never really spoke about his family or growing up as my mother recalls.

Susan was born to John and Mary Margaret (Robin) Bentz on 28 August 1878 in Worthington, Dubuque County, Iowa.  Susan’s parents and several of her siblings had been born in Luxembourg before the family immigrated and settled in Iowa in the early 1860s.  Susan is believed to be the 9th and last child born to John and Margaret Bentz. 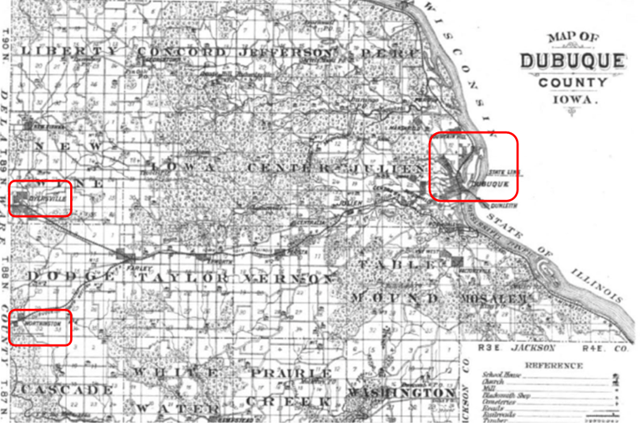 photo from the book The History of Dubuque County, Iowa, containing A History of the County, its Cities, Towns, etc. published 1880

In June of 1880, according to the US Federal Census, Suza (age 3), her parents and her brother Jacob (age 10) were still living in Dodge Township, Dubuque County, Iowa.  Worthington was part of Dodge Township.
1885 Iowa State Census - I am unable to locate Suza and her parents.

In the Iowa, State Census of 1895 Susie was 17 years old and living in Remsen with her birthplace being listed as Dubuque County, Iowa.  Susie is living with her mother Mary (Widow) age 59, birthplace Luxembourg, who is Keeping House and her brother Jacob age 25, who was also born in Dubuque, and Plaster as his occupation.

Susie would meet and marry Henry Hamman on 11 October 1897.

Susie and Henry would live in Remsen and have 6 children who would all live to adulthood:
In the 1900 US Federal Census I am unable to find Henry, Susie and daughter Mary.
In the 1905 Iowa State Census Susan,  Henry and their children Mary, John, Maggie, Jacob, and Michael are living in Remsen, Iowa.
from The Remsen News, Remsen, Iowa.  Thursday, 28 March
1907 page 5

(not sure who the family was?)


I know a little more about Great-Grandma Susie’s life but still have so many unanswered questions.  I wonder what type of mother she was?  Did she like living in Remsen?  Does anyone have a picture of her?