Amanuensis Monday-A Will but …Whose Signature is That?

Kate Hamman is my maternal great-great-grandmother. (See post What’s the Correct Information?)  Based on census records, obituaries and Kate’s death certificates I believe she was born in Luxembourg/Germany about 1845.  Her parents names are unknown except that her maiden name was Hein.  Kate married Jacob Hamman,  I believe, in Luxembourg before heading to America about 1880 and settling in Iowa.  Kate and Jacob had 12 children.  At the time of Kate’s death, I believe, there were 9 children living:  Nick, Peter, Michael, Joseph, John, Lena, Margaretha, Francessa and Henry (my Great-Grandfather).  Her husband Jacob died in 1900 in Fredonia, Iowa. 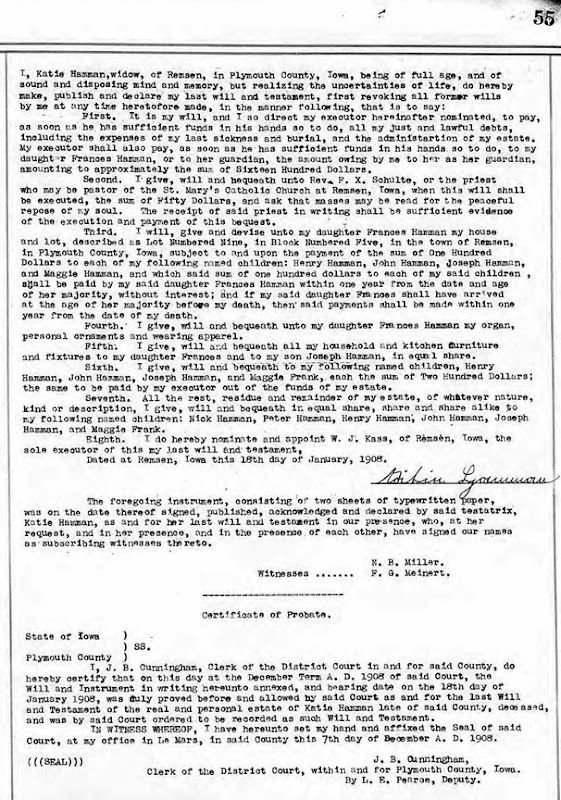 I, Katie Hamman, widow, of Remsen, in Plymouth County, Iowa, being of full age, and of sound and disposing mind and memory, but realizing the uncertainties of life, do hereby make, publish, and declare my last will and testament, first revoking all former wills by me at any time heretofore made, in the manner following, that is to say:


At the time of Kate’s death:
So, when I read Kate’s Will I saw her name listed at Kate Hamman.  Then I noticed the line with her signature and I thought…how strange.  The signature sure doesn’t look like it says ‘Kate Hamman’.

I looked at the pages in the ledger before and after this one to be sure that the person who’s Will it is should be on the line and yes, that’s the way it should be.  So, who’s signature is that??????  The first letter of the last name looks like an ‘L’ not an ‘H’.  This just doesn’t make sense.  I know Kate could read and write based on the 1900 census and there is no mention that anyone else is signing for her…hmm.  I wasn’t sure what to think so I searched out help on the internet.  I know that Kate was from Germany/Luxembourg and probably spoke German or French.


I copied Kate’s signature and put it on the Facebook pages for the San Diego Genealogical Society and the Luxembourg Genealogy site.  Dona at SDGS thought it was an old German shrift (handwriting) and then Cathy Meder-Dempsey (who writes the Blog- Opening Doors in Brick Walls) had the answer.  She let me know that the above handwriting does say ‘Katin Hamman’ in an old German script and see included a link to a Family Search Wiki on German Handwriting and here is the alphabet: 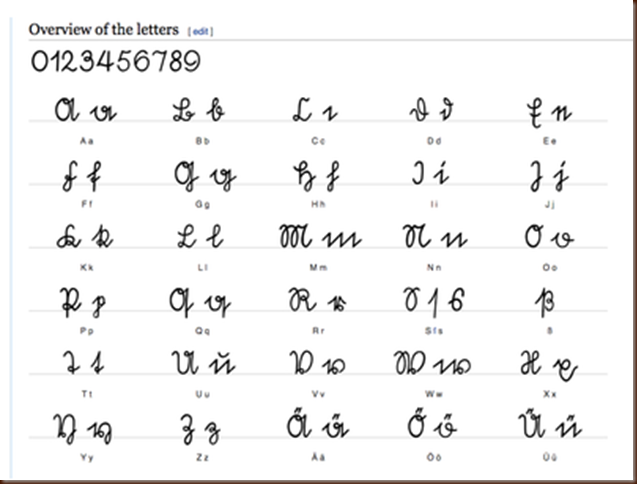 In the article it states that the Old German Gothic handwriting is very different from the old Roman script most of us English speakers are used to seeing.  How interesting!  You just never know how a simple ‘Will’ can become a History lesson.  Gretchen also said that the first name is a Germanic variation of Katie.  It is so wonderful to have such knowledgeable and willing people to help us on our searches.  Thank-you to everyone who was so quick to answer and offer assistance!  This also demonstrates the value of the group Facebook pages.  Find some groups that do similar research to you and join them.  Without them it would have taken me a long time and a lot of research to find the answer.  There is so much I have to learn on Luxembourg and German Genealogy but I know that when I get stuck there are people out there willing to share their knowledge.

From Kate’s Will I learned that:

I wish I could find a picture of Kate or the home she lived in.

I hope one day I can figure out who Kate’s parents are and where in Luxembourg they came from.