One of my paternal 3x great-grandmothers was Mary  E. _ King.  If I trace back on my paternal side this would be George Washington King’s father Louis’ mother.

What have I been able to find out about Mary and can I figure out where she was born?  I have a lot of questions about Mary.

I first find Mary in the 1850 US Federal Census as living on the 2nd day of August 1850 in Brooklyn Ward 6.  Mary was married to Theodore King (see post Theodore King or Should I say Theodor Konig?) She was listed as 34 years old and her birthplace was listed as Germany.  She did not have an occupation listed and was listed as being unable to read or write.  At the time Mary and Theodore had 5 children: Catherine (15), Jacob (11), Louis (8) my 2x great grandfather, Mary (6) and Caroline (4).  All the children were listed as having been born in New York. 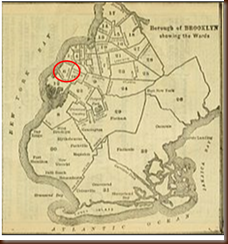 1850 Wards of Brooklyn Map from Wikipedia

New York State Census 1855.  On 23 June 1855 date Mary and her family is living in Brooklyn City, Ward 12, Election District 1, Kings County, New York.  Mary is listed as 37 years old and a birthplace of Pennsylvania.  She was widowed with an occupation of Wash Woman.  She had lived in the City for 12 years.  Jacob, Louis, Mary and Caroline were living with her.  Was Catherine married or had she passed away along with her father Theodore?  This census lists Jacob as being born in PA.  Hmm…did Mary and Theodore marry in PA?

New York State Census 1865.  On 1 June 1865 Mary was living in Brooklyn, Kings County, New York.  She was listed as being 48 years old, birthplace- Pennsylvania. Of how many children the parent of -7.  Number of times married –1.  Widowed.  She was living with Caroline (18), a Seamstress and Single.  They were living in a 2 family dwelling.  The other family was the Daniel and Catherine Lewis Family with their 4 children.  Interesting because the wife was named Catherine and the age fits that perhaps she was Mary’s daughter??  I’m aware of 5 children, so, who were the other 2?

US Federal Census 1870.  On 17 June Mary was living in Brooklyn Ward 12, Kings County, New York.  Mary was 55 years old, birthplace – PA.  Occupation was Keeping House.  Mary was living with her sons Jacob (30) and Louis (28).  They were living in a 2 family dwelling.  Mary is again living in the same house as Daniel and Catherine Lewis and their 4 children.

According to the 1870 Brooklyn City Directory Mary lived at 54 Wolcott in Brooklyn.
New York State Census 1875.  On 1 June 1875 Mary was living in Brooklyn Ward 12, Election District 2, Kings County, New York.  She was 58 years old, a Housekeeper, and widowed.  Mary was living with her son Jacob (39).  They were living in a 2 family brick dwelling.  Mary is again living in the same house as Daniel and Catherine Lewis and their 3 children.

I was unable to locate Mary in the 1880 US Federal Census.

Mary died on 6 August 1890 at 14 1st Avenue (on the second floor) in Brooklyn, Kings County, New York and is buried in Greenwood cemetery with her great granddaughter Louisa King.  Mary was about 70 years old at her death.  Her cause of death is listed as Old Age and Neuralgia.  I wonder if she was living at the time of her death with one of her children?  I noticed Mary’s death certificate was presented to her daughter-in-law Sarah King, my 2x great grandmother and the wife of Louis King who had died 3 months before his mother.  According to Louis’ death certificate he was living at 14 1st Avenue when he died, so, Mary died at the home of her daughter-in-law.


I was able to locate a lot of information about Mary but still have many questions.  From the census record I would guess, and still need to research, that:

With further digging I was able to determine that Catherine King Lewis was Mary and Theodore’s daughter as I had suspected.  Now I know her married name as well.