In a previous post entitled Searching for Nettie Emily Coolbaugh Cornell I researched the life of my maternal great grandmother Nettie.  At the time I had a year of death but no location of her death or a cause of her death at the age of 42.  When I initially searched I had thought she died in Spencer, NY where the family had lived.

I found the family living in Spencer in 1920 in the US Federal Census and then in the 1925 NY State Census I found the family living in Ithaca without Nettie.  Many Public Member Trees on Ancestry listed Spencer, NY as Nettie’s place of death but I believed otherwise since the 1925 State Census was taken the same year of Nettie’s believed death.  After writing to both Tompkins County (Ithaca) and Tioga County (Spencer) New York and requesting Nettie’s death certificate I was finally successful!  Ithaca is where the family was living when Nettie passed away. 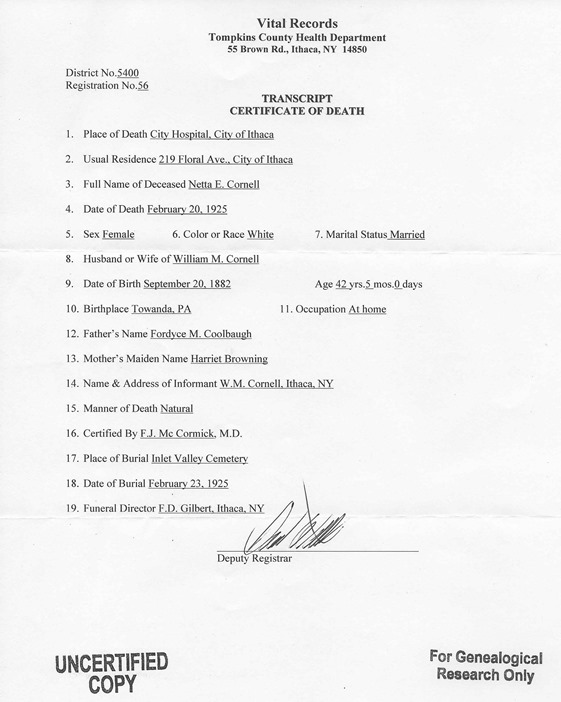 From Nettie’s death certificate I now know that she died at the Ithaca City Hospital (1).  I know the family lived on Floral Avenue (2).  I am guessing that the original handwritten record, most likely a ledger, must have been difficult to read because Nettie’s father is listed as “Fordyce M.” and his name was Portis M.  I know the informant was her husband William Cornell (14).  I know she is buried at Inlet Valley Cemetery (17).  This probably explains why her husband William, who would marry 2 more times, was also buried at Inlet Valley when he was living at the time of his death in Spencer, New York.  Did William buy 2 cemetery plots at the time of Nettie’s death?

I was perplexed by not finding a ‘Cause of Death’ but rather a ‘Manner of Death-Natural’ (14).  I haven’t seen that before on a death certificate.  OK, so, she died of ‘Natural’ causes but what was her cause of death at 42 years of age?  After further correspondence with Tompkins County Vital Records I was able to determine that Nettie’s cause of death was Acute Nephritis.  Now, I have verified her location and cause of death!

While searching newspapers for Ithaca, New York on Newspapers.com I found Nettie’s obituary: 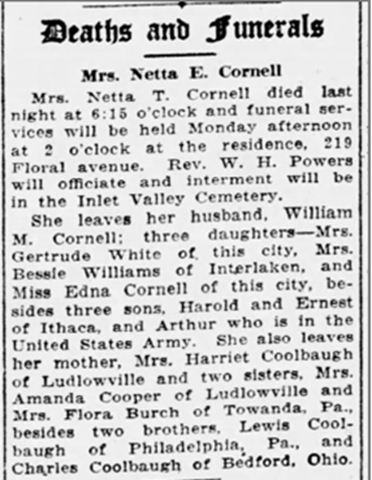 She leaves her husband, William M. Cornell: three daughters-Mrs. Gertrude White of this city, Mrs. Bessie Williams of Interlaken, and Miss Edna Cornell of this city, besides three sons, Harold and Ernest of Ithaca, and Arthur who is in the Untied States Army.  She also leaves her mother, Mrs. Harriet Coolbaugh of Ludlowville and two sisters, Mrs. Amanda Cooper of Ludlowville and Mrs. Flora Burch of Towanda, Pa., besides two brothers, Lewis Coolbaugh of Philadelphia, Pa., and Charles Coolbaugh of Bedford, Ohio."

If you have any corrections or additions or stories to share I look forward to hearing them.
Enjoy the journey,
Debby
Posted by Debby's Family Genealogy Blog at 4:09 PM