James Jacob Hammond is my maternal grandfather.  Last week while visiting my mother Marcella I decided to do some research and realized that Saturday was his 113th birthday. 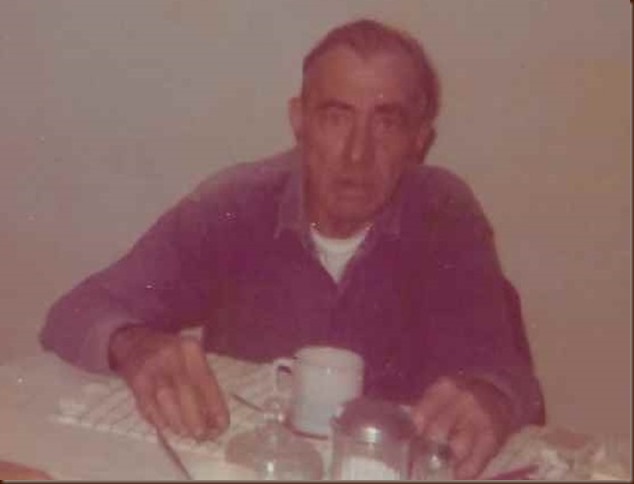 He was born 2 April 1903 in Remsen, Plymouth, Iowa.
In looking at my previous research I realized I had 2 Baptismal certificates…hmmm and the names are a little different??
A difficulty in tracing my grandfather’s roots was his last name.  Even the records of his grandfather Jacob’s immigration paperwork has the last name as Hamman on one piece and Hammond on another.
1905 Iowa State Census in Remsen, Plymouth, Iowa 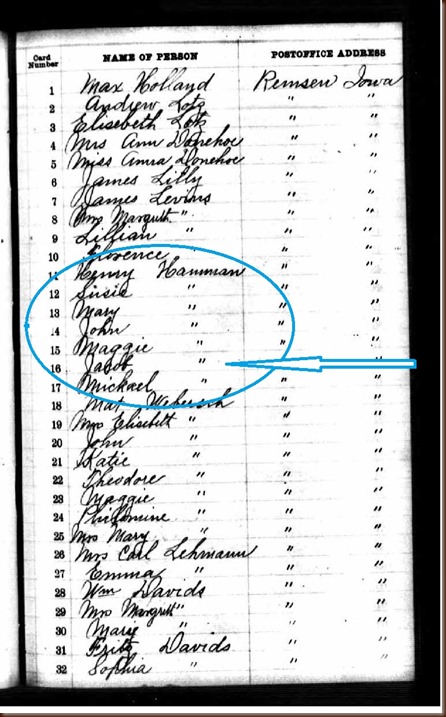 I was surprised to learn that in 1908 things seem to have dramatically changed for my grandfather and his family. 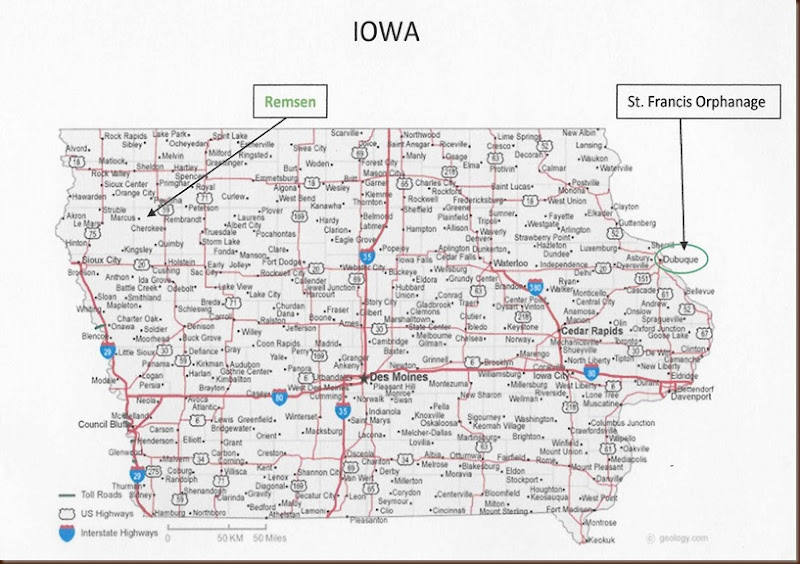 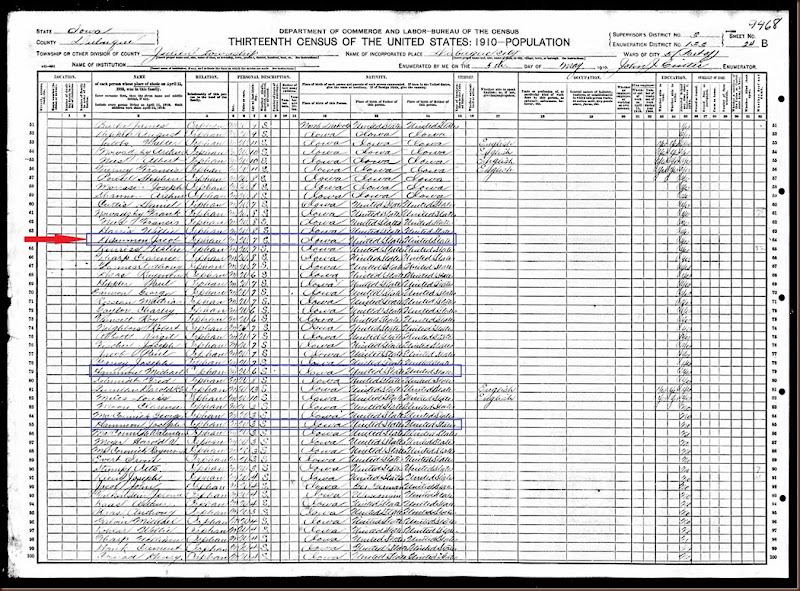 1930 US Census in Brookings, Brookings, South Dakota
My grandfather ‘Jacob’ is found living with his brother Arthur and family. 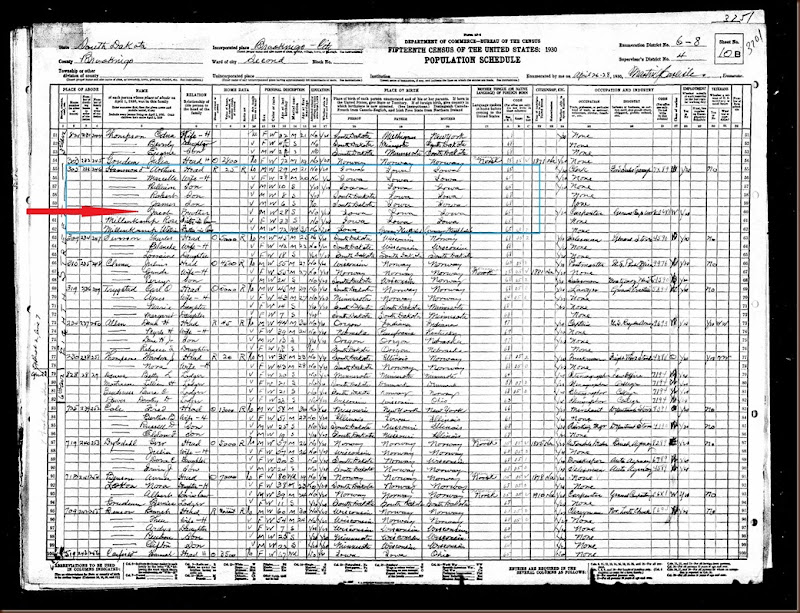 I asked one of my Uncles several years ago if he knew how/why my grandfather went from Iowa to Upstate NY.  He said my grandfather had run liquor during Prohibition from Canada to New York City.  Another driver he ran with had been caught in upstate NY so my grandfather ditched his truck and stayed where he was …in Upstate NY.  What a great story!
On 15 March 1934 in Spencer, NY my grandfather married my grandmother Edna Chloe Cornell. 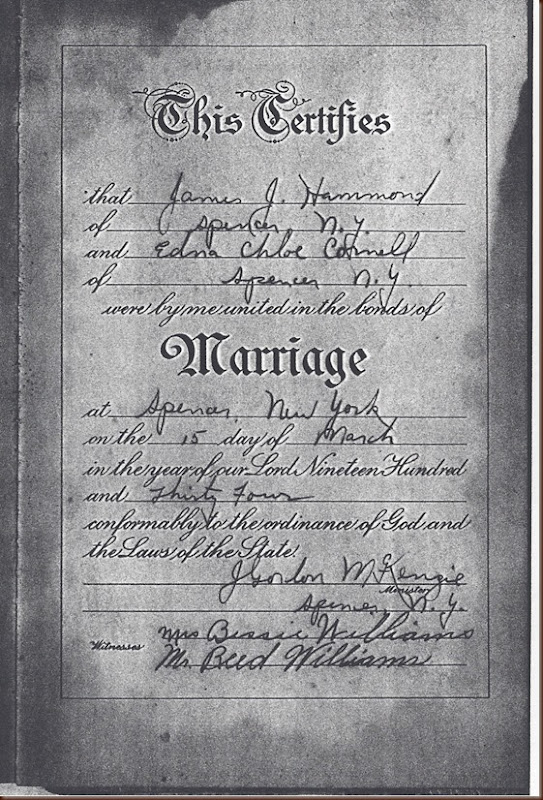 After a short stay in Fresno, California they returned to Spencer, NY to live. 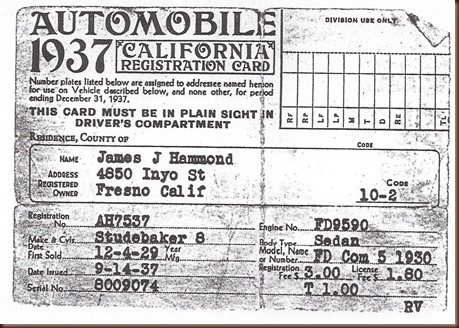 Edna and James had 6 children that all lived to adulthood.
My grandfather liked Detective Magazines, coffee and his cigarettes.  He liked to raise his own vegetables and could be found growing a variety of vegetables in his garden including chard and cabbage as well as nasturtium.  When having his own garden he enjoyed making his own sauerkraut, bottled beer, and head cheese.  He rolled his own cigarettes.  My grandfather did all his own mechanical work on his cars including taking the motors in and out of cars.  He was known to also make children’s rocking horses.  He worked as a farmer and a carpenter until WWII and then worked at a variety of foundries including General Electric in Elmira, NY. 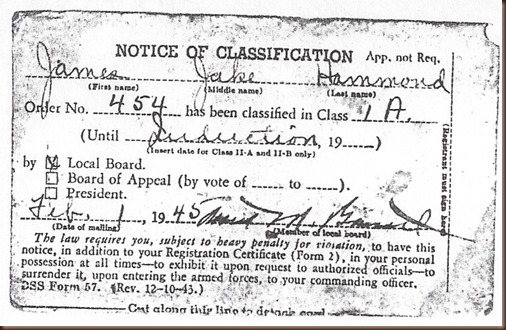 As a child he grew up speaking German and attended school in German while living in a predominately German speaking community.  His grandparents, Jacob & Catherine Hamman and John & Mary Bentz had immigrated from Luxembourg.  After the start of the War German was not spoken.  As an adult he rarely spoke German and did not pass it on to his children.

James Jacob Hammond died 9 Mar 1980 in Van Etten, Tioga, New York.
If you have additional stories or information I would like to hear them.  I have definitely learned a great deal more about my grandfather this week.
Enjoy the journey,
Debby
Posted by Debby's Family Genealogy Blog at 9:18 PM