A 1720 Family Land Deed for Nathaniel Warner and James Reeve

Land deeds are fascinating documents.  Sometimes land records are full of great family information and other times they can verify your ancestor was in a particular location at a particular time period.  As I was investigating early land records for Long Island, New York I started wondering about the earliest land records.  When were land records first recorded?  Who was the first to say they ‘owned’ the land?  How far back can I document my ancestor’s ownership of land?

While researching in Suffolk County, New York I learned that the King of England claimed the land as the country in this area was being settled.  Land ‘patents’ were frequently given to a small group of men as they began settling an area.  As the population grew the land was then ‘sold’ off to others.  According to the Suffolk County Clerk’s Online Records website there are land record transactions since 1857.  While searching at the County Land Records Division of the Suffolk County Center in Riverhead, New York I also discovered the Archivist room.  In a vault in the back of the room are the oldest ledgers.  When looking in the ledgers gloves are needed to turn the pages do to their age.  Several of the ledgers have been protected with archival sleeves which makes it easier to search but harder to take photos of the documents.

I recently discovered a land record attributed to my 6th and 7th great-grandfathers Nathaniel Warner and James Reeve.

Nathaniel was the first Warner on this line to come to Long Island and remain for the rest of his life. 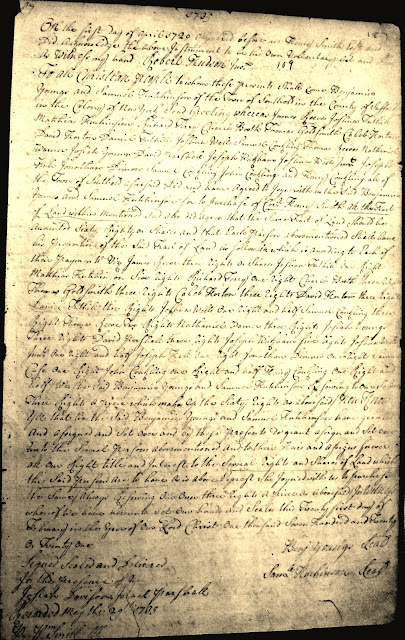 To all Christian people to whom these presents shall come Benjamin Youngs and Samuel Hutchinson of the Town of Southold in the County of Suffolk in the Colony of New York Send Greeting whereas James Reeve, Joshua Tuthill, Mathias Huchinson, Richard Terry, Charles Booth, Thomas Goldsmith, Caleb Horton, David Horton, Daniel Tuthill, Joshua Wells, Samuel Conklin, Thomas Reeves, Nathaniel Warner, Joshua Youngs, David Stackhole, Joseph Wickham, Joshua Wells Junior, Joseph Hale?, Jonathan Dimon ?, Samuel Conkling, John Conkling and Henry Conkling all of the Town of Southold aforesaid Did and have agreed to Joyn with us the Said Benjamin Youngs and Samuel Hutchingson for to purchase of Cor. Henry Smith all the Tract of Land within mentioned and who did agree that the Same Tract of Land should be amounted Sixty Rights or Shares and that each parson abovementioned Shall have his proportion of the Said Tract of Land as follow that which is awarding to Each of their _ to Viz. James Reeve three Rights or Shares, Joshua Tuthill one Right, Mathias Hutchinson for Six Rights, Richard Terry one right, Charles Booth three rights, Thomas GoldSmith three rights, Caleb Horton three Rights, David Horton three Rights, Daniel Tuthill three Rights, Joshua Wells one Right and half, Samuel Conkling three Rights, Thomas Reeve Two Rights, Nathaniel Warner three Rights, Josiah Young Three Rights, David Pershale? three Rights, Joseph Wickham five Rights, Joshua Wells Jun. one Right and half, Joshua Wells Jun. one Right and half, Joseph Hale? One Right, Jonathan Diman one Right, Samuel Cafe One Right, John Conkling one Right and half, Henry Conkling One Right and half, We the Said Benjamin Youngs and Samuel Hutchinson the saving to Our Three Rights a piece which make up the Sixty Rights as above paid/Now Know Yee that we the Said Benjamin Youngs and Samuel Hutchinson have granted and assigned and Set over and by these present Do grant assign and Set over Unto the Several Person abovementioned and to their Heirs and assigns forever all our Right title and Interest to the Several Rights and Shares of Land which this Said persons are to have as is above Except the Joyned with us to purchase the Same always Refering our Own three rights a piece as abovesaid in Witness wereof we have hereunto set our hands and sealed this Twenty first day of February in the Year of Our Lord Christ One thousand Seven Hundred and Twenty or Twenty One.

I do not know how big the area was that James and Nathaniel obtained since the document refers to a ‘Right’ or Share.  I also do not know exactly where the land was located in the ‘Town of Southold’.  Southold was a very large area that encompasses what today is also the Town of Riverhead.  My guess, since I have looked at land ownership on a map in the Village of Southold with no mention of Nathaniel, that it was probably located around the Mattituck area.  I know that Nathaniel was frequently noted as being involved in this area.

This was an extremely difficult document to transcribe due to it’s age, about 280 years.  I took several pictures at different angles to try and minimize light reflections on the document due to the plastic sleeve the document is in.  After first transcribing the document from my photo I ran it through a program Vivid-Pix which helped me read several of the words I could not previously decipher.  I would definitely recommend this program if you are working with old documents and photos.  Vivid-Pix even has a free trail if you want to try it out before buying. 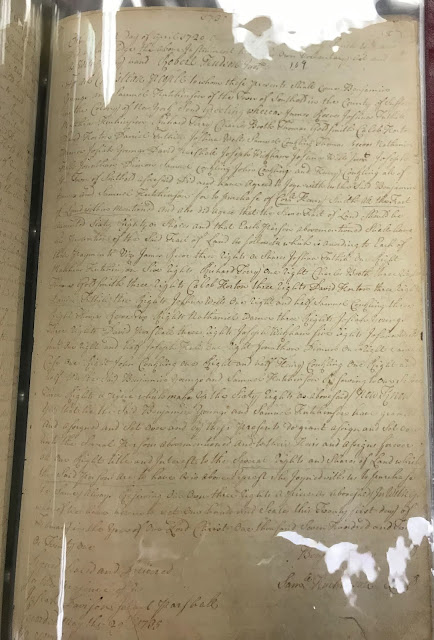 I believe that the year ‘1739’ is at the top of this document.  My guess is that while the transaction is reported to have occurred in 1720 it was not actually recorded in this Ledger until 1739 probably copied from the actually document possessed by one of the holders of the deed perhaps.  The older handwriting, spellings of the times and age of the document made several of the words and names difficult to decipher.  I welcome other interpretations of the missing or incorrectly noted information.  Perhaps you can read it better or know of the missing names of several of the men?  Be sure to let me know.  I also find it interesting to see how several common in the area Surnames have changed spellings over the years.  This is definitely a document that others need to review so we can obtain all the names for historical reasons.