The Will of Joel Johnson 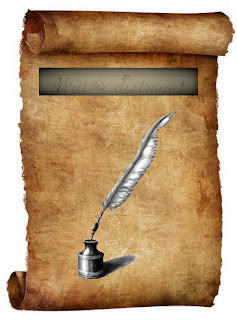 Joel Johnson, my maternal 4th great grandfather, passed away at the age of 81 on 6 November 1880 in Orwell, Bradford County, Pennsylvania.  His Will (located at the Bradford County Historical Society) was dated the 6th of October 1880, a month before he passed away. 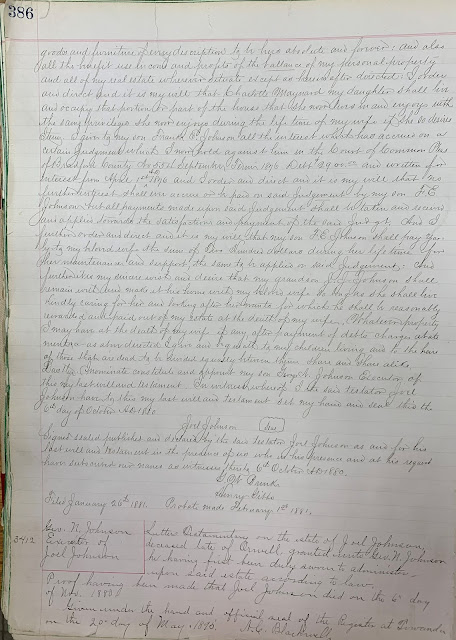 I, Joel Johnson, of the Township of Orwell in the County of Bradford and State of Pennsylvania being weak in body but of sound mind memory and understanding do make and publish this my last will and testament hereby revoking and making void all former wills by me at any time heretofore made As to such Estate as it hath pleased God to intrust me:  I dispose of the same as follows, First I direct, that all my debts charges and funeral expenses and charges of proving this my will be fully paid and satisfied out of my personal estate.

Item.  I give and bequeath to my beloved wife Saphronia Johnson all my household goods and furniture of every description to be hers absolute and forever: and also all the benefit use income and profits of the balance of my personal property and all of my real estate wherever situate except as here in after directed:

I order and direct and it is my will that Charlotte Maynard my daughter shall live and occupy that portion of part of the house that she now lives in and enjoys with the same privilege she now enjoys during the life time of my wife if she so desires.

Item.  I give to my son Frank E. Johnson all the interest which had accrued on a certain Judgement which I now hold against him in the Court of Common Please of Bradford County No 554 September Term 1876 Debt $2900.00 and written for interest from April 1st 1876 and I order and direct and it is my will that no further interest shall ever accrue or be paid on said Judgement by my son F. E. Johnson but all payments made upon such Judgement shall be taken and received and applied towards the satisfaction and payment of the said Judgement.  And I further order and direct and it is my will that my son F. E. Johnson shall pay yearly to my beloved wife the Sum of Two Hundred dollars during her life time for her maintenance and support, the some to be applied on said Judgement:

And further it is my sincere wish and desire that my grandson J. J. Johnson shall remain with and make it his home with my beloved wife.  Whatever property I may have at the death of my wife, if any, after payment of debts-charges abatements & as above directed I give an bequeath to my children living and to the heirs of those that are dead to be divided equally between them Share and Share alike.

Signed sealed published and declared by the said testator Joel Johnson as and for his last will and testament in the presence of us who in his presence and at his request have subscribed our names thereto 6th October AD 1880.

Some thoughts about Joel's Will:

I always find it interesting, the deposition of property and goods, in helping to piece together the lives of my ancestors, what was important to them as their bodies were failing.
(See previous posts Joel Johnson Finding the Facts,  Tombstone Tuesday-Joel and Sophronia Johnson and Joel Johnson, Biographical Sketch to learn more about the life of Joel Johnson.)