My paternal great-grandmother, Carrie Terry Warner, in the Fall of 1880 returned to the Trenton Normal School to complete her studies to become a teacher.  She wrote in a letter dated 12 September 1880 to her father, Gilbert Terry, about getting settled back at the Normal School and about her classes.  (See last week’s post about the journey back to school-Heading Back to School in 1880)  I am guessing that her father, a mill operator in Peconic, Long Island, NY wanted a full account of what was happening since I’m sure he was paying for her ‘college’ experience. 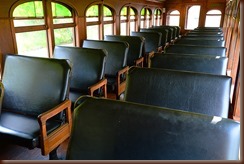 “ As I got off the cars [train] at Trenton, I met Miss von Seyfried.  She came down from Newark on the same train with us.  I don’t believe I had been at the Hall ten minutes before my trunk was brought up and I began to unpack. 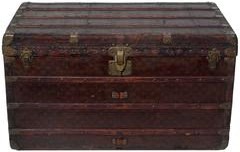 The screw that you put in catches in front wore out and done when it got here.  I brought a couple of tumblers back with me and one of them was all broken to pieces.  Those grapes were in a pretty bad condition when I unpacked.  The juice had run out of the box and I found places all around in the tray of the trunk where the juice had run through on to it.  It got on within the trunk but my old water proof a nd a little bit on one of my sheets.  I think I was pretty lucky not to have something spoiled by it.  I found all my things just as I left them when we went away. 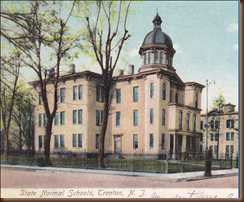 I found an old postcard online

There were very few of the old girls when we got back but, Oh! so many new ones.  I heard that Mrs. Deane said there were one hundred new girls.  They have had to put two extra tables in the dining room so we have eighteen tables now all full.  In the boarding hall every room is full, and in the small hall it is the same.  Besides these two buildings there is a third building which belongs to these establishments and which they keep to fall back on in case of necessity.  This year they have to put five or six in there.  It seems strange that while the number of girls increases every year, the number of boys decrease.  Very few boys entered this year.

Wednesday morning we went over to school and got our books and had lessons assigned for the next day.  Thursday morning there was a teacher meeting so we had not recitations [period of classroom instruction] the first two periods, and one thing and another kept hindering so we had only two recitations that day.  Friday everything went on as usual except two periods occupied in seating us.  I have a seat second from the front.  They have divided the chapel into two rooms so we will hereafter have opening exercises in the school room and will have no marching.

The first period we have rhetoric and American Literature; the second Mental Science or Outline of Man, the third Arithmetic; the fourth Zoology; the fifth drawing, the sixth Methods in Arithmetic or Carr’s Methods as they are called because they are taught by Prof. Carr; the seventh period we have elementary methods or methods in objects, color, geography, &tc.  Hannah is with me the first period, third period, fourth &tc; fifth periods.

We went down town yesterday morning.  The Universalist Church has been closed this summer.  I supposed it would be open by this time, but I heard it is not.  To day nothing has been said about it.  We have all remained at home.  I think it will open again in a few weeks, but it is doubtful because I heard yesterday they thought some of giving up the society.  It it doesn’t open so I can go there where shall I go?  I will not go to the Presbyterian or Baptist, if I can help it.

It was said when we went away last summer that there would be several changes made in the Hall before our return.  The laundry was going to be moved and various other changes intended, but none of them have been accomplished, everything is just the same as it was before.  I suppose you have often thought of me because I was so nearly sick when I left home, but I got all over that in a few days.  Last Friday afternoon we went to call on Mrs. Packer to find out about church but she was not at home.

Don’t forget to send me some stamps when you write and I trust that will be soon.  I feel so tired and stupid today that I can’t write any more to you this time.

I have done a lot of research around Carrie’s letters that has helped me understand who people were and understand things she talked about.  While Carrie gives me a lot of description in her letters, research and photos was helped me bring them a little more alive.  I start to see the connections between people and places that only add to my understanding of Carrie and the time period she lived in.

By looking at the 1880 US Federal Census for Trenton, New Jersey I was able to find a section for the Normal School and I learned that:
I found a listing on-line for New Jersey State Archives and was able to get a copy of the dates that Carrie attended and a copy of the Graduation Program.

While I have no way of knowing what Carrie’s trunk or the train cars she rode in from Newark to Trenton actually looked like I can search on-line and find pictures.  I picture Carrie’s trunk looking like the above picture of an 1880 era trunk that I found.  From a picture of train car seats I can imagine Carrie and Hannah sitting side by side as two young women heading to their second year of ‘college’ at the end of a long, over night journey from Long Island.

I believe this all adds a richness and an understanding to the story of Carrie’s Letters.

Almost 100 years later I too became a teacher.  I did not know at the time I was taking classes about Carrie being a teacher.  I would love to know more about the composition of her classes and how they laid the groundwork for education today.