Heading Back to School in 1880

My Great-Grandmother Carrie Terry Warner left a wealth of information for us without ever intending to when she wrote letters to her family over the course of 30 years.  (See Carrie’s Letters for the first of many stories).

At this time of year as students are headed back to college I am reminded of a letter Carrie wrote to her father Gilbert Terry dated 12 September 1880 from Trenton, New Jersey.  Carrie was beginning her second year in a 2 year program at the Normal School in Trenton, New Jersey where she was taking classes to become a School Teacher.  The ‘Normal School’ in Trenton was  established in 1855 as the first teacher training institution in New Jersey and the 9th in the Untied States.


From the Long Island Traveler newspaper in the Peconic section dated September 9, 1880 page 2:
“Misses Hannah King and Carrie Terry have returned to the State Normal School at Trenton, New Jersey”

First-I wondered what her journey would have looked like on a map set to her own retelling of her journey.  Could I see the route of her trip and try to remember it was happening in 1880? 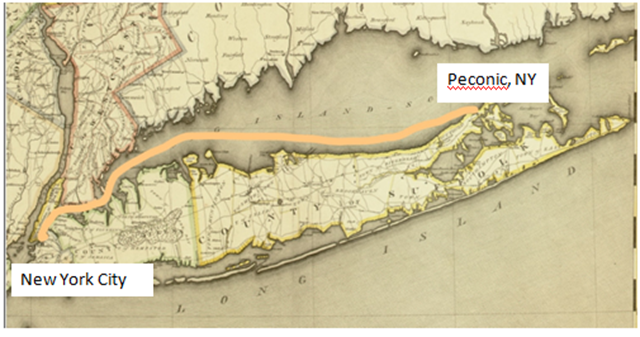 
I suppose you have been looking for a letter ever since I left home.  I meant to have written immediately but circumstances prevented.  I will commence at the beginning and tell you about all that has happened since I left home.  We had a very pleasant trip on the boat.  It was a little foggy but not enough to hinder our progress.  We arrived at New York about six o’clock.


Bennie Moore, Uncle Calvin’s son, was on board and since he is Hannah’s cousin and devoted himself particularly to her, of course, I became acquainted.  He has been to Yale College and is now engaged in teaching somewhere in Brooklyn or New York.  He is well educated but for all that he is sometimes a little queer, and it is amusing to hear him talk.  There were a great many on the boat among them three negro women who had births in the cabin.  During the evening I went into the cabin to put on my cloak and they sat there talking.  It seems one of them had been talking with a medium.  It was really interesting and laughable to hear her talk.  I did not listen long so am not able to repeat anything that she said.  We were met at the boat by Mr. Higgins and another young fellow, Mr. Henderson by name.  Mr. Higgins was at Mr. Baldwin Terry’s boarding and we met him there on the fifth of July when we were there.  Perhaps you remember him, I did.  Mr. Henderson has been boarding at Mr. Terry’s too this summer although he was not there at the time we were.  Mr. Higgins, because he had met me before I suppose, devoted himself to me and left Mr. Henderson to wait on Hannah. 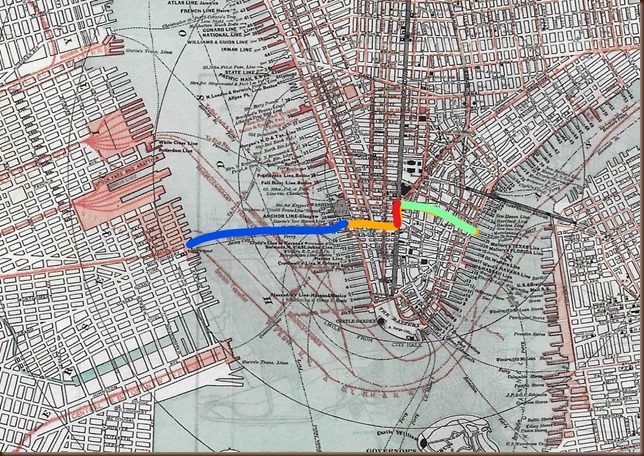 We went up Fulton St., stopped at a restaurant and had breakfast.  I think it was Cabel’s, but I am not sure.  We then went on up Fulton St., along Broadway and finally down Cortland St. to the ferry.  We had consulted the expressman on the boat and had expressed our trunks over to Cortland St. ferrys,  He told us that would be the best way.  When we reached the ferry the trunks were not there so we had to wait half an hour for them.  On account of them we missed the 8.20 train for Trenton and so were obliged to wait until nine.  We got our ticket there for Trenton and had our trunks checked so there was no more bother with them.  After disposing of our trunks we went across the river {Hudson]and got on the cars [train].  We had not a great while to wait over there.  The gentlemen waited to see us off.”


Map of the Railroads of New Jersey 1887 Drawn and Compiled by John T. Van Cleef and J. Brognard  Betts 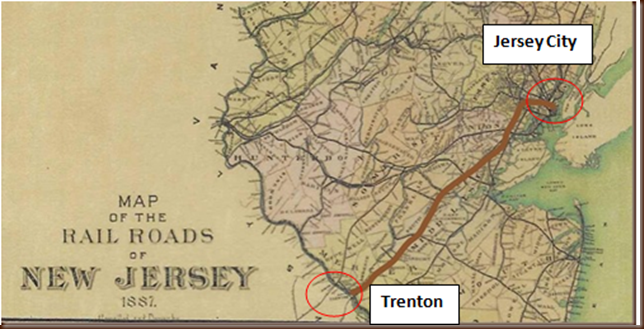 brown line is one of the train lines from Jersey City to Trenton, New Jersey

Wow, what a journey for a young woman of 19 years.  Two young girls traveling alone.  I guess this was there second year and second time doing this trip but it was 1880.  The remainder of her letter tells about arriving at the Normal School and her classes.  (More to follow on that.)

I am glad that I did the research to find the maps and I am amazed at the types of maps I was able to find.  I was surprised to see how many docks and ferrys there were around New York City in 1880 as well as the number of train lines in New Jersey at that time also.  There were train lines on Long Island so I am not sure  why Carrie and Hannah went by boat to New York City.  Maybe it was cheaper or easier with them taking trunks to go by boat to New York City?  I think the maps really enable me to picture her journey of about 164 miles in 1880.  A journey today that would take about 4 hours to drive…depending on traffic, of course.

As I think about my Great-Grandmother’s exciting journey all the way to another state to attend school to become a teacher and her adventurous spirit I can’t help think about 3 of her great-granddaughters who had a similar adventurous spirit in their teens and because Exchange Students to other countries.   I went to Bolivia, then my cousin Marie went to South Africa and then my sister Ann went to Brazil.  Years later even my niece Nicole would study abroad for a semester in Chile.  I would like to think that, unbeknownst to us at the time of Carrie’s journey, she was cheering us along on our adventure of a life time, exploring new places, languages, cultures and meeting new people.  I’d like to think she would have been proud of us carrying on her adventurous spirit.  Not all treasures passed down from generation to generation are material items.