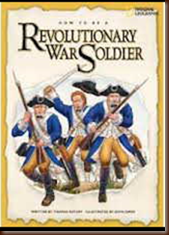 I think I have about 7 Revolutionary War Veterans among my ancestors.  While so many lines of my ancestors have been in the United States since the 1600s and 1700s it has made tracing them to their ‘home’ country towns a lot harder, but on the other hand it gives me great pride in knowing how many of them served in the founding of this great country.

Jacob Grantier (see post entitled Sunday Serendipity-Jacob Grantier) was my maternal 5th Great-Grandfather.  I found the following on the Tri-Counties Genealogy and History website about Jacob:

“Jacob Grantier (Granteer, Granadier), a native of the province of Lorraine, Germany, came to America about two years before the Revolutionary War, locating in Schoharie county, N.Y. Here he joined Morgan's famous riflemen and served until the close of the struggle for Independence.”

I decided to do some further research to see what I could find out about Jacob and Morgan’s famous riflemen and Jacob’s military service.
Morgan’s Riflemen were an elite light infantry unit commanded by General Daniel Morgan in the American Revolutionary War.  They served a vital role because they were equipped with what was then the cutting-edge rifle instead of muskets, allowing superior accuracy up to ten times the distance of the typical troops of the day.  General George Washington, in his own words described them as "...chosen men, selected from the army at large, well acquainted with the use of rifles, and with that mode of fighting which is necessary to make them a good counterpoise to the Indian."  They were very skilled sharpshooters.  I was not able to find any verifying information yet that Jacob was part of this group, however, I have found information indicating this was true.  More research to be done in this area to confirm.
On Fold3 I was able to verify that Jacob was in the Revolutionary War and was in Colonel Peter Vroman’s Regiment of Albany County Militia (Fifteenth Regiment) which existed from about 1779-1783.  (click on images to enlarge) 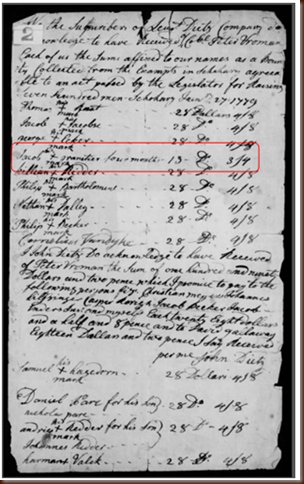 Transcription:  Appears as shown below on a Receipt Roll under the following heading:  “We the Subscribers of Lieut. Dietz’s Company do acknowledge to have Received of Col. Peter Vroman of us the Sums affixed to our names as a Bounty Collected from Exampts in Schohary agreeable to an act passed by the Legislator for the Raising Seven hundred men.”  Roll dated, Schohary Jan. 27, 1779.
Jacob  X (his mark) Granetier four months 13 Dollars 3/4

I was able to also find the following listing of Jacob being paid for his service: 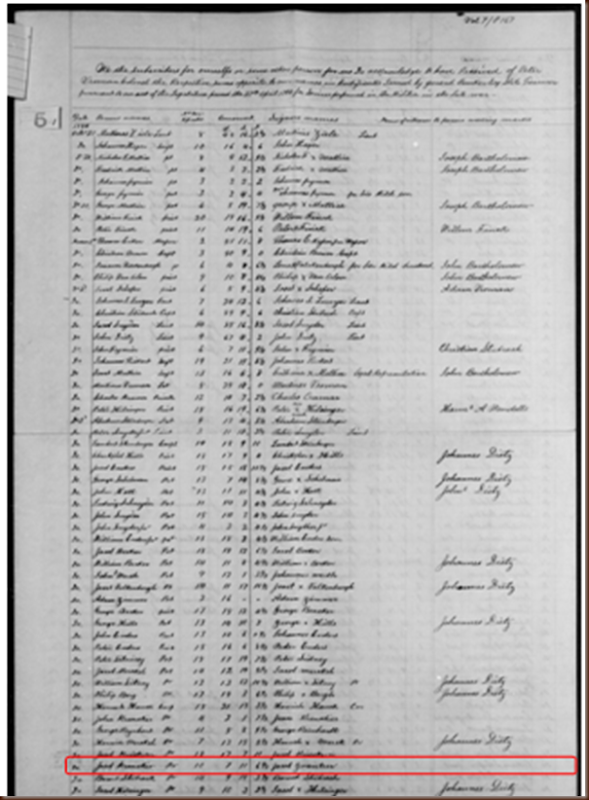 Transcription:  We the Subscribers for ourselfs or some other person for us Do acknowledge to have Received of Peter Vroman the Respective sums opposite to our names in Certificates Issued by Garard Banker Esq State Treasurer pursuant to an act of the Legislature passed the 27th April 1784 for Services performed in the Militia in the Late war-

Transcription:  Certificates issued or to be issued by virtue of an act, entitled An act for the settlement of the pay of the levies and militia, for the services in the late war, and for other purposes therein mentioned, passed the 27th day of April, 1784.

I have not been able to determine what the certificates were ever worth to the soldiers, perhaps Land Warrants?

This is additional confirmation of Jacob's Military Service: 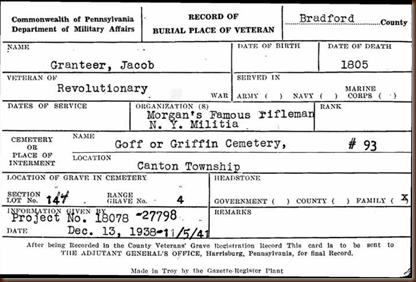 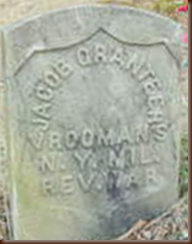 I so love it when all the pieces fit together so nicely and information from a variety of sources is consistent information.  I also find it interesting the many spellings of the name Grantier and Vroman.  I am guessing that the spelling of Jacob’s name may have changed since it looks like initially he was unable to write his name and then must have learned how and spelled it his way.

I am continually thank-full for the service of my ancestors and all Veterans in shaping this great country!


If you have any corrections or additions or stories to share I look forward to hearing them.