I recently recalled my Father telling me what his family had done for several years when he was growing up for Thanksgiving and thought it was a tradition that needed to be recorded.

My Grandfather had a duck farm out on Eastern Long Island that required constant attention.  It certainly wasn’t a 9 to 5 job.  It was difficult for him to get away on trips but around Thanksgiving he was able to take some time in the 1940s.

My father remembers my Grandfather Olin driving my Grandmother Agnes, my Aunt Gloria and him in to New York City early in the week of Thanksgiving.  My Grandfather would spend the night and then have to drive the 60 some miles back home to check on the farm and then return to the City by Thanksgiving.  They always stayed at the Hotel Pennsylvania (renamed the Statler in 1949 and in 1991 it was once again renamed the Hotel Pennsylvania) on Seventh Avenue across from Penn Station.  My Dad remembers that some years they had a window in their room that they could see the parade from and watched it right there from their room.  Other times he said they would go to the end of the hallway and watch from the windows there.  The family ate Thanksgiving dinner in the dining room of the Hotel.  He remembers being a young boy of 10-12 and always wanting to pay the bill for dinner.  My Grandfather would hand him the bill and give him the cash so he could go pay for dinner.  How important and grown up he felt.  They left their car in the parking garage under the Hotel and walked around New York City or used a taxi. During the day they went walking around looking at the many Christmas decorations and doing some shopping.  He remembered my Grandmother going to the Concierge desk at the Hotel to get tickets to shows such as Oklahoma, Radio City Christmas Spectacular, etc. and how much he enjoyed the shows. He also remembered going to dinner one night and having a table right next to the stage.  He said he was so excited to hear the famous trumpet player W.C. Handy-St Louis Blues.  He said he was so close he could almost reach out and touch Mr. Handy. After a busy and fun week Sunday came and it was time to head back home.  What a great tradition and memory to preserve!

The Macy’s Thanksgiving Parade, as we know it, was originally called the Christmas Parade.  The parade began in 1924 and has run every year with the exception of 1942-1944 during WW II.


I was able to find the following mentions of the families’ trips to New York City in the local newspaper of the time:
The County Review newspaper dated Nov. 29, 1945

“Mr and Mrs Olin Warner and children spent the holiday and weekend in New York City.”

In 1945 the big balloons were reported to be Bobo the Hobo (Clown), Acrobat, Teddy Bear, Pumpkin, Ice Cream Cone 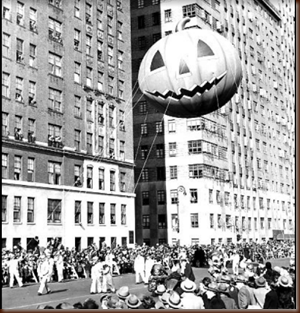 The County Review newspaper dated Dec 2, 1948
“Mr and Mrs Olin Warner and son Olin Jr spent the holiday and weekend in New York, where they were joined by their daughter, Miss Gloria, of Lasalle Junior College, Aubarndale, Mass.”

Many years later I would take my young son in to New York City to see the parade two times.  Our first time was in 1986. 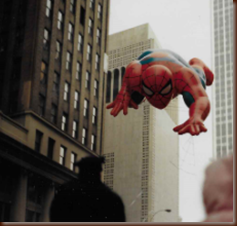 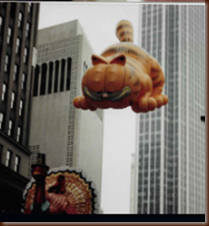 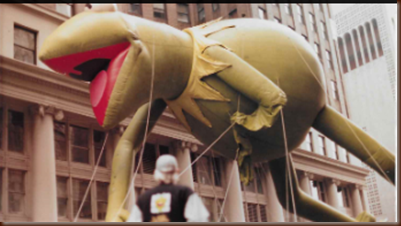 One time my sister was even able to join us.  We watched along the route of the parade and not at Macy’s.  I remember how cold it was standing there (I think one year it was 11 degrees and windy) and how quickly the parade was over compared to the 3 hour time it takes on TV.  My son also remembers having a loose tooth that came out while eating a New York pretzel.

It was an amazing experience to be there in person and see the huge balloons and floats go by.  One we will definitely not forget.  I’m thankful we were able to continue that Family tradition of seeing the Macy’s Thanksgiving Parade in person and to be able to record my father’s story.  What a great memory it was for him that we now have a record of!  It was fun for me to listen to my father tell me about these great memories he has.  With a little searching I was even able to locate the YouTube videos of the 1945 Parade and the one of W.C. Handy-St. Louis Blues on the Ed Sullivan Show and share them with my father who enjoyed watching them.  It’s so amazing what is available on the Internet and how we can share in my Father’s memories.

If you have any corrections or additions or stories to share I look forward to hearing them.
Enjoy the journey,
Debby
Posted by Debby's Family Genealogy Blog at 8:54 PM