A Lot More Questions Than Answers-The Life of Ann Rowan

Ann Rowan is my paternal 3rd great-grandmother.  I thought I would do a formal research plan on her to determine where in Ireland she was born and see what I could find out about her parents.  Sometimes I am not sure if the information I have gathered is on the actual person I am researching.  This is especially true when I am researching common names.  If I write it out as a formal research plan I find it easier to weed out the incorrect person when I can see all the information side by side.  I have found several listings for Ann Rowan, William Rowan and John Rowan during the same time period.  The following is the information I believe to be correct about ‘my’ Ann Rowan:


I use a spreadsheet for my Research Plan.  As I find the information I fill it in on my table.  Then as I start to find information that doesn’t seem to be correct I cross it out.  I like to see the information I have found even if it is incorrect so I don’t waste time later looking over the same information. 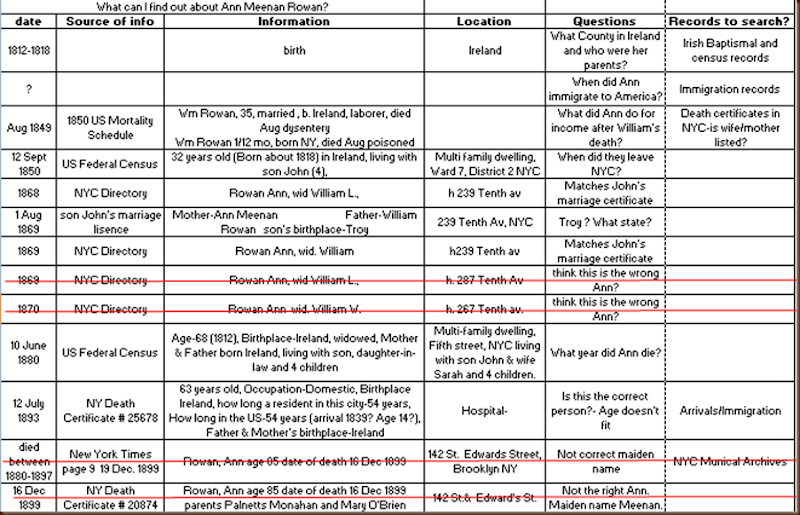 I still have no information on where Ann was born in Ireland or who her parents were. UGH!!  Definitely, more searching to be done.  I have some ideas and will let you know what I find.
If you have any corrections or additions or stories to share I look forward to hearing them.
Enjoy the journey,
Debby
Posted by Debby's Family Genealogy Blog at 5:33 PM