I remember a few years ago at the Southern California Genealogy Jamboree I took a workshop that was given by Paula Stuart-Warren.  During the workshop she stated that one of the best things to do when researching was to have someone to work with.  I always find this to be true!  Sometimes they can find things you can't and may have ideas you hadn't thought of for researching.

I was researching the life of my maternal 2nd great-grandmother Harriett Browning DeLeon Coolbaugh.  I published my first of now 4 blog posts entitled Harriett Browning DeLeon Coolbaugh on what I had found out about Hattie’s life.  While researching I had hit a major brick wall in regards to Hattie’s first husband.  All I knew was that his last name was DeLeon.  I had spent hours searching for information to no avail.  Within an hour, I think, of publishing that first post my distant cousin Wendy had figured out who Mr. DeLeon was and that he and Hattie had had a daughter.  Major WOW!! 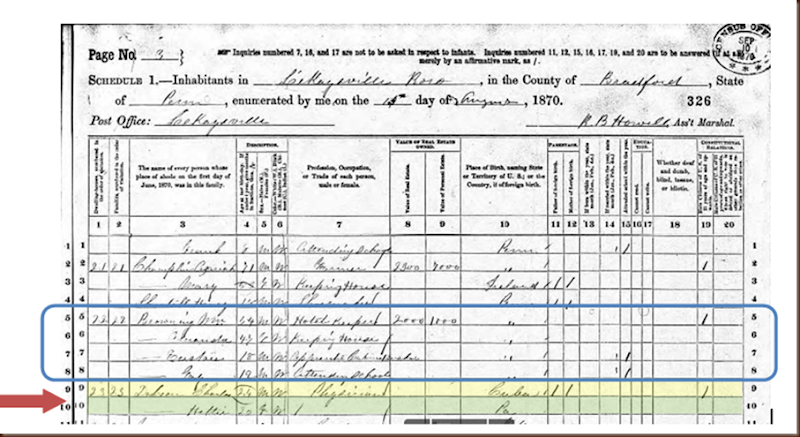 (click on image to enlarge)
Right above Hattie and Charles on the census are listed Hattie’s parents-William and Amanda Browning along with her brothers Eustace and Gay.  This all fits!  Actually, I had found William and Amanda before on this census but never looked at the names below theirs to find Hattie and Charles…ugh!  How did I miss that?? Reminder: always look at other names on the Census page.
In the blog post Sunday Obituary-Harriett “Hattie” Browning DeLeon Coolbaugh the obituary states that Hattie was survived by a daughter “Mrs. Harry Bruch”.  Obviously there was a spelling error but the pieces are fitting together.  YEA!  And we now know that Harriett had a daughter with Charles DeLeon, her first husband.

So, four Blog posts later I now have a much better picture of Hattie’s life.  I was amazed at how much information I was able to find on her!  The information just kept coming but it took Federal and State census records, marriage records for her daughter Florence, searching City Directories (see post Tip-Searching City Directories), an obituary, Civil War Pension records, North American Family History records (Coolbaugh Family) and the tremendous help of my cousin Wendy to put all the pieces together.  Sometimes the information just keeps coming.  I know there is probably even more information to find.

Wendy and I have worked together previously and I so enjoy not only talking to her to find out about her life but the rich research talks we have as well!  I am looking forward to one day soon actually meeting her in person.

Posted by Debby's Family Genealogy Blog at 10:19 AM