Amanuensis Monday the Will of Jemima Aldrich Benjamin 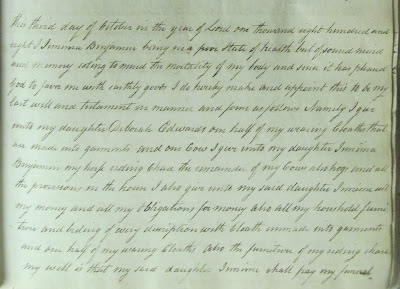 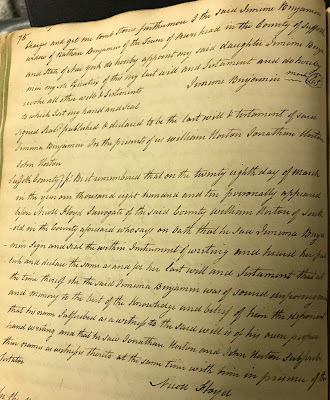 
Transcription:
This third day of October in the year of Lord one thousand eight hundred and eight I Jemima Benjamin being in a poor State of health but of sound mind and memory calling to mind the mortality of my body and since it has pleased God to favor me with earthy goods I do hereby make and appoint this to be my last will and testament in manner and form as follows

furthermore I the said Jemima Benjamin widow of Nathan Benjamin of the town of Riverhead in the County of Suffolk and the State of New York do hereby appoint my said daughter Jemima Benjamin my sole Executrix of this my Last will and Testament and do hereby revoke all other wills & Testaments.

Jemima Benjamin mark L.S.
To which I set my hand and seal
Signed Sealed published & declared to be the last will & testament of Jemima Benjamin In the presents of us William Horton, Jonathon Horton, John Horton
Suffolk County: Be it remembered that on the twenty eighth day of March in the year one thousand eight hundred and ten personally appeared before Nicoll Floyd Surrogate of the said County William Horton of Southold in the County aforesaid who says on oath that he saw Jemima Benjamin Sign and Seal the within Instrument of writing and heard her publish and declare the same as and for her last will and Testament that at the time thereof the said Jemima Benjamin was of sound disposing mind and memory to the best of the knowledge and belief of him the despondent that his name Subscribed as a witness to the said will is of his own proper hand writing and that he saw Jonathon Horton and John Horton Subscribe their names as witnesses thereto at the same time with him in presence of the Testator
Nicoll Floyd

Notes:  I wonder if Jemima was unable to sign her name due to her 'poor state of health'  since she used a mark?
Jemima only mentions her daughters in her Will.  Her third daughter Mary ‘Bethia’ Benjamin Sweezey had passed away before her and is not mentioned, nor are her children.