How Close Did my Ancestors Live to Each Other

Have you ever wondered how close your ancestors may have lived to each other? I found a land document that answered that question for me about the Benjamin and Warner lines.

When I am back East visiting family I always want to spend some time at the Suffolk County Land Records Department in Riverhead, New York. I am constantly amazed at some of the things I am finding in a location that many choose not to explore. A while back I discovered the Archives room in the Land Records office. The ledgers here are the fist record books dating back to the early 1700s, I believe. These ledgers and are not out on public display in the regular land deed section, I am guessing, due to their age. Ledgers from this time period need to be specifically requested and if the pages are not in sleeve protectors then you must use gloves to touch and turn the pages. When I was there in May I was waiting for the Archivist, Sharon Pullen, and stopped to look at several of the display cases that were there. I am usually in such a hurry to get copies of the records I am looking for and get on with my day that I rarely take the time to look at what is on display figuring it doesn’t relate to me anyway. This time was different…

The display case had to do with Unacknowledged Deeds. 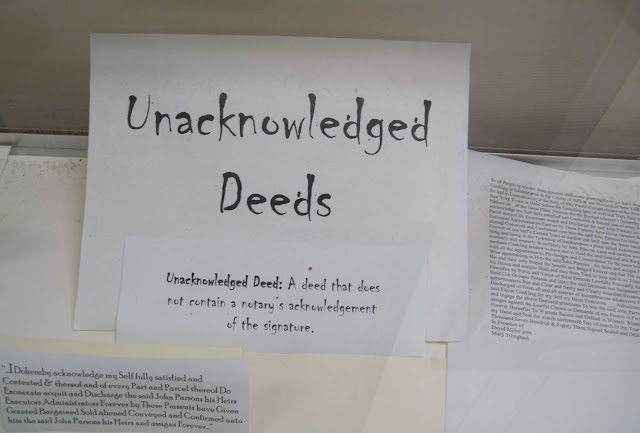 Unacknowledged Deeds as stated in the display case are deeds that do “not contain a notary’s acknowledgement of the signature”. That’s interesting and I had never thought to verify that there was a notary’s signature on the documents I have found. Good information to have as a genealogist. I continued to look at the documents in the case and found the following: 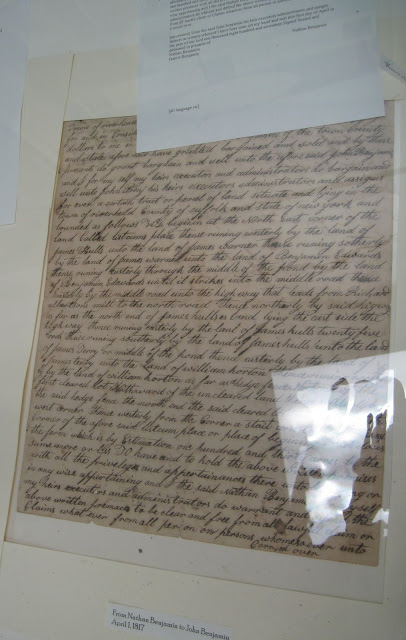 
Some background on my paternal ancestors and some interesting connections that I was able to draw:

This would mean that my 3rd great aunt and uncle, James Jr and Huldah Warner and my 4th great-grandparents Nathan & Joanna Benjamin owned adjoining property in 1817.

The ‘Terry’ and ‘Edwards’ names are also ancestral Surnames from this area. I’ll need to do additional research to see if Benjamin Edwards and James Terry who are property owners referenced are also ‘family’.

It’s amazing how one document can locate several ancestral lines in the same location at a particular point in time. One of the many reasons I enjoying looking for property deeds, acknowledged or unacknowledged. Remember to also take the time to look at display cases that are right in front of you. You’ll never know what treasures you might find and the translation was already done for me!