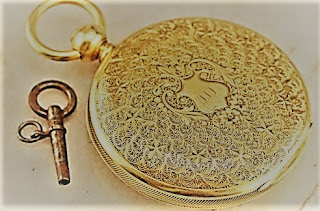 Marvin Milton Coolbaugh is my maternal 3rd great-grandfather. I started out researching his life a few weeks ago (see post Sometimes You Just Get Lucky) and am finally getting back to him. When I start out researching one of my ancestors I may have a birth and death date and perhaps a marriage date. But that is never enough for me. I want to know about their lives; what did they care about, what were they involved with what was happening around them while they lived. Sometimes, I am able to find out a lot about them and other times information may be scarce. What can I learn about Marvin?

According to the 1820 US Federal Census, the year before Marvin’s birth, his parents Benjamin and Louisa were in the township of Towanda, Bradford County, PA. The population was about 1,342 people. It appears that Benjamin’s brother William and several other Coolbaughs were also living in that area.

On 27 November 1841 in Canton, Bradford, PA Marvin (age 20) and Abigail Betsey Grantier (age 18) were married. They would have 4 children: Portis (my 2x great-grandfather), Bertha, Frank and Arthur.

In the 1850 US Federal Census in Monroe, Bradford County, on 31 July, MM Coolbaugh was 29 years old. His occupation was listed as Farmer. Betsey, his wife and children Francis, Portis and B.L. are also listed. MM’s maternal grandparents, Timothy and Lois Alden are listed as living in the same dwelling. Timothy is also listed as being a Farmer. Lois would die in 1851 and Timothy would die in 1859.

In 1858 on the County Tax Roll I find MM owing some money on taxes. Were these taxes perhaps for farm land that Timothy owned (when moving to the area he purchased 800 acres) that Marvin was helping him run and maybe taking over?


In the 1860 US Federal Census in Monroe Borough, Bradford County, on 13 August, MM was 39 years old. His occupation is listed as Hotel Keeper. AB, his wife and children BF, PM, BS, AE and J Crous, Day Laborer, are also listed.

In 1860 and 1861 MM seemed to be involved, according to the local newspaper, in politics and elections that were occurring. More to follow on this.

On 11 April 1861 MM applied for the first 'Hotel Keeper' license I was able to locate: 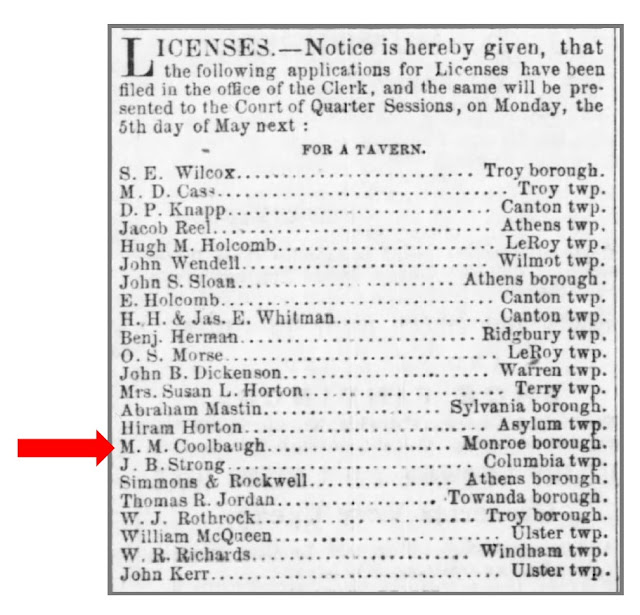 LICENSES-Notice is hereby given that the following named persons have filed in the office of the Clerk of the Court of Quarter Sessions, their petitions for license under the existing laws of this Commonworth, and their several applications will be heard before the Judges of the Court of Quarter Sessions, on Monday, the 6th day of May next, at 2 o’clock, p.m. of said day:

On an “Alphabetical List of Persons in Division No. 15th, of Collection District No. 13th, of the State of Penn, liable to a tax under the Excise laws of the United States, and the amount therof, as assessed by A Mullan, Assistant Assessor, and by I S Monroe, Assessor, returned to the Collector of said District, for the month of May, 1865. Annual” I find:
Coolbaugh MM Monroe Boro, Monroeton 1 Gold Watch Number in Abstract-272 Quantity or Valuation $75 Rate of Tax 1 Total $1.00

In the 1870 US Federal Census in Monroe Borough, Bradford County, on 5 August, MM was 49 years old. His occupation is listed as Constable. Listed as living in the house with him are his wife BA and son Arthur.

On 13 September 1879 at the age of 58 Marvin died in Monroe, Bradford, PA. His occupation was listed as Constable at the time of his death.

I have a better understanding of the life MM lived but have some lingering questions: