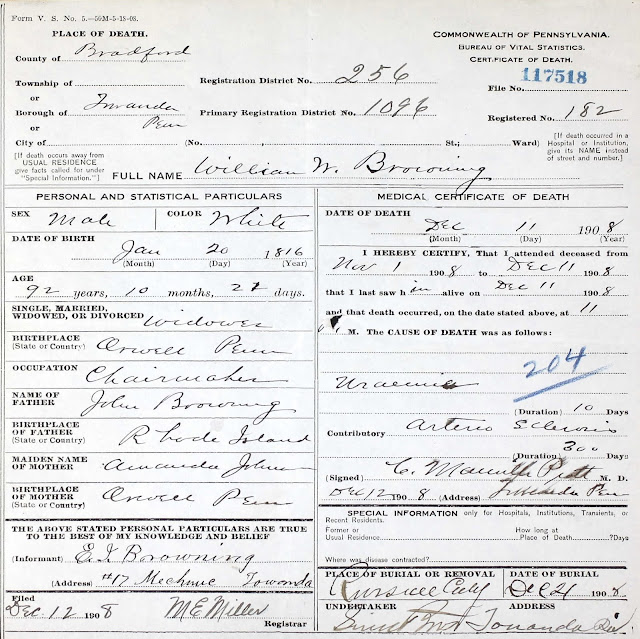 I already knew: William lived in a rural area and he was a chairmaker.  William’s date of birth and death, occupation, father’s name and birthplace.  When I look at the mother’s information I see there is an error.  William’s son who gave the information (E.I. Browning) gave the name of William’s wife Amanda (son’s mother) instead of William’s mother (Lucy Welles Weaver).

What I learned:  the death certificate number, cause of death, duration of illness, who gave the information about William for the death certificate, the address where William lived with his son, date of burial and the Undertaker’s name.  Interesting that William was buried 10 days after he died.  That seems like a long time in 1908.

Frequently, in genealogical research, we get sidetracked with something that takes us down a path that we commonly refer to as a ‘rabbit hole’ and we may get lost there for hours. I wanted to learn more about William’s cause of death and went down a new rabbit hole but it gave me some interesting information.

On the death certificate it looks like the cause of death is ‘Urae’… something? Hmm?  As I googled and searched and reviewed the spelling I decided it must say ‘Uraemia’.  Well, what exactly does that mean?

So, William was 92 years old and had chronic kidney disease lasting for 10 days as well as Arterio Sclerosis which he’d had for about 10 months.  Well, as I was researching ‘uraemia’ I had looked at common listings of death in 1908 hoping that would tell me something about ‘uraemia’ and before I knew it…I went down the rabbit hole and learned about death rates and causes in 1908.  How did William’s death fit into the statistics?

I wondered what the Mortality Statistics were and if they would add something additional to William’s story?

Looking at the deaths in Bradford County, Pennsylvania (#410) in the age group 90-94

I see there is only one reported death.  That one must be William.  He was the oldest person to die that year in Bradford County.  He truly lived a very long life as compared to the general public.  Very interesting.  There were a total of 93 people that died in the county that year that were above the 50 years of age expectancy for men.  Did the rural life or genetics or lifestyles of the residents add to their high rate of longevity?

I would definitely use the Mortality Statistics again, especially to see how my ancestor’s cause of death compared to the general population.  This would also show deaths due to epidemics.  In 1908 the country was starting to look at occupations of those that died to determine if there was a correlation between occupation and cause of death.  Looking beyond the general information in a record can tell us so much more about the times in which our ancestor’s lived.