Today is the 205th birthday of my maternal 3rd great-grandfather William Way Browning.  I wanted to remember him on his birthday and see what I could learn about him.

William was born 20 January 1816 in Orwell, Bradford County, Pennsylvania to John Wilkes and Lucy Welles Weaver Browning. William was the 5th of 6 children.

William (25 years old) is first found in the 1840 US Federal Census living by himself in Towanda, Bradford, PA employed in Manufacture and Trade.

William (age 32) married Amanda Johnson De Leon (age 26) on 1 November 1848 in Orwell, Bradford County, PA and had the following children: Harriett (my 2nd great grandmother), Eustace, Guy. I believe this may have been a second marriage for William as well as Amanda.

1850 US Federal Census on the 20th day of September shows William (34 years old) living with his wife Amanda and baby daughter Harriet, 3 months old (my 2nd great grandmother) in Orwell, Bradford County, PA with his occupation listed as a Chair Maker working in the Industry of Furniture and Fixtures. His Real Estate is valued at $400. His birthplace is listed as Pennsylvania. William and family are living next door to his inlaws-Joel and Sophronia Johnson. William’s brother Ephraim Browning (aged 31) is listed as living next door and his occupation is also a Chairmaker. I wonder if they worked together?

1860 US Federal Census on the 26th of July shows William (44 years old) living in Orwell, Bradford, PA with his wife Amanda and four children. His Occupation is Chair Maker and his Real Estate is valued at $1400 and his Personal Estate is valued at $740. There is a Chair Maker apprentice, Edwin Sherman, aged 17 living with them also. William’s birthplace is listed as Pennsylvania.

1880 US Federal Census on 19th of June shows William (62 years old) living in Towanda, Bradford, PA (Paptor Road) with his wife Amanda, one son and one granddaughter Flora DeLeon. Their daughter Amanda had a child by her first marriage named Florence. When she remarried it looks like her daughter went to live with her parents. (see post Followup-Hattie Browning DeLeon Coolbaugh) His Occupation is Chair Maker. William’s birthplace is listed as Pennsylvania. His mother and father’s birthplaces are listed as Massachusetts. Interesting, I have information that says his parents were born in Rhode Island?

1900 US Federal Census on 20th of June shows William (84 years old) living in Towanda, Bradford, PA (19 Mechanic St West Side) His Occupation is Cabinet Maker. William’s birthplace is listed as Pennsylvania. Year of Birth-1816. His mother and father’s birthplaces are listed as Rhode Island. He can read, write and speak English. He Rents a home. He married Amanda in 1848. His son Eustace and his family live next door.

William died six years later on 11 Dec 1908 at the age of 92 in Towanda, Bradford County, PA His Occupation was listed as a Chairmaker (death certificate). His son Eustace gave the information for the death certificate.

William is buried in the Riverside Cemetery in Towanda, PA. 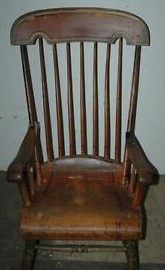 I wonder what type/style of chairs William made and if any of them still exist?