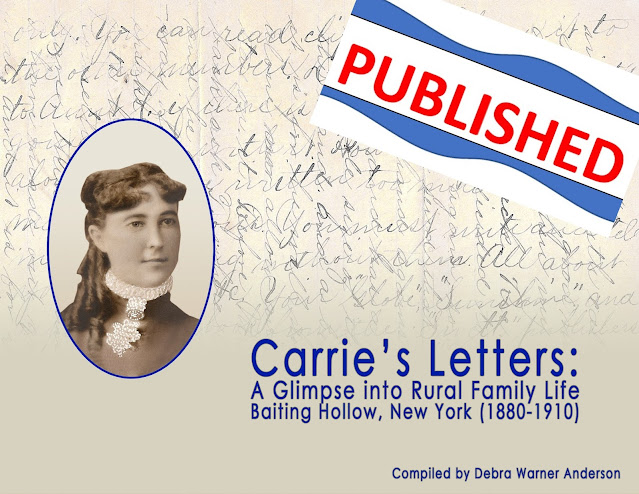 Over ten years ago my father showed me a shoebox of letters written by my paternal great-grandmother Carrie (Terry) Warner. Carrie was a woman I really knew nothing about except that she died suddenly when my grandfather was barely five years old. Thus began an amazing journey to make the letters available for others to read. (See tab on blog entitled Carrie’s Letters for additional stories)

At the beginning of this journey the task seemed rather straightforward: scan and transcribe the letters in to a digital format so that others could read them. And that’s exactly what I did. My father and I scanned all the pages of all the letters and I began transcribing them. Many of the letters had unnumbered multiple pages in them. The letters had been folded in envelopes for over 100 years and creases sometimes made the letters difficult to decipher. I used Microsoft Word and did a separate file for each letter. In some of the letters the writing had become rather light. In several of the letters Carrie wrote vertically and then horizontally across the pages. Carrie also wrote in the margins, across the top space of the letter and sometimes around the edges of the letter. Some of the letters took hours or even days to transcribe. But, I was so grateful to have these letters!

As I transcribed and read the letters I realized I had no idea who some of the people were that she was talking about. Who was Aunt Em or Aunt Carrie, Sizzie, etc.? I needed to figure out who the people were that Carrie was talking about to better understand what she was saying to her parents and her sister Ella. Realizing that more detail was needed I tried to figure out the best way to add that information without distracting from the story in the letters. Sidebars seemed like the best way to add the needed information. Somewhere along the way I heard about a program by Adobe called inDesign was the best place to put the transcribed letters to make it easier for others to read. Thank goodness for my son who was able to help me set up the program with the margins, sidebars and headings I would need for the letters. Now the research began. Thanks to Jill Morelli

Once Genealogists begin researching anything it is VERY difficult to stop that research. My husband frequently reminded me that at some point I had to stop or I’d NEVER finish this and get the pages published for others to read. This became like a 5,000 piece puzzle just sitting there waiting to be put together. How could I just leave it? When was there the right place to say…OK, I’m done? Each time I went back over pages I would figure out who someone else was that Carrie talked about. I also started an Index for the letters. Who were all these people and why were they important enough for her to mention in her letters? Once I started looking at who married whom, women’s maiden names, etc. the letters made a lot more sense. Years passed, I was working full time and we all know life gets busy. I kept saying that when I retired this project would get my full attention and I would complete it. Retirement arrived in June 2020.

The last four months I have devoted the majority of my time to completing this project. A final edit and the comparison of the 2nd full edition of the letters to the digital format was completed. Hours were spent to complete a listing of the over 600 people mentioned in the letters and/or in the sidebars. Notes were made as to who the people were and who they were connected to. Justine Warner Wells book entitled The Descendants of Daniel Jr. & Eleanor Howell Warner of Baiting Hollow LI, NY and the Warner Ancestors in England and America was an enormous asset. This helped me keep several generations of the family straight as Carrie told me about the family in her letters. I also used free online digital newspapers. Whether Carrie talked about the Train Depot Robbery or the death of a local person, the newspapers added more details. Since news was traveling by word of mouth back then I was also interested in how closely the story she told matched the accounts in the local newspapers. When Carrie talked of someone’s death or marriage, a little research helped me figure out who exactly she was referring to. Sometimes only first names were used. If I could find other clues in the letters, I might have even been able to determine a last name. I believe through the letters I was even able to date a picture the family has of the Mill in Peconic that Carrie’s father Gilbert ran for many years and even determine who took the picture.

So, the research is done, now what? Several years ago I attended a seminar given by Jill Morelli entitled “Just Do It! Self-Publishing Your Family History at the Southern California Genealogy Jamboree. (See Blog post Southern California Genealogy Jamboree 2018-Thursday) I came away believing ‘I can do it-publish Carrie’s Letters’ and actually wrote that on my notes. Silly me thought that getting the letters transcribed and with sidebars was all I needed to do, the hardest part. Well, trying to complete the information in the program was very time consuming. From this part forward I always felt that I was operating at a level that was just beyond my realm of knowledge. There were countless long phone calls to fix errors in the file. Hours spent trying to understand the new vocabulary of this program and how to work within its limits. Overwhelming, to say the least. I took a chance and reached out to Jill who was so encouraging and helpful. Hopefully, I can encourage someone else as she encouraged me.  She also advised me to print a sample book of a few pages to see how things looked.

Then a printing company needed to be determined. A cover design needed to be developed. My son graciously worked with me to design an amazing cover! Oh, but just having a cover design then led to a new program to make an entire book cover. More new vocabulary and things to learn. While doing things digitally is very convenient you frequently cannot pick up the phone and talk to a person any more. They might email and answer your question but several times when I asked a specific question I was directed to their general resource articles to search for my answer. So frustrating!  What were the costs involved, etc. The book has an 11x8.5 inch page size to allow for the sidebars next to the actual letter.  The book has over 100 letters and is over 300 pages including an Index of about 20 pages that includes notes on relationships.  The process was daunting! Yes, this is doable online and easier than I’m sure it was 50 years ago but still a very high learning curve.

Last week I was able to upload everything needed to be able to print the first 25 hardcover books! YEA!!! Big sigh of relief. I also pushed my luck and successful uploaded a file and cover for a digital eBook version. Now others can learn about Carrie, her husband John, their six sons and about the community they lived in. If you have ancestors that lived in the Baiting Hollow/Riverhead area from 1880-1910 then your ancestors might be mentioned. Maybe, like me, you’re just interested in seeing what life was like back then for a young woman as she studied to be a teacher, then became a wife and mother. The letters definitely tell about everyday life then, from getting ice at the ice house to make ice cream, putting in a windmill, building a barn, killing livestock for food or sale, growing crops and flowers, and even the latest gossip about who was dating who in the area.

Hardcover copies will be donated to the local libraries, Town Historian’s Office, and Suffolk County Historical Society for those researching in the area. If you’d like your own copy to read, the hardcover, can be ordered through CarriesLettersBook@gmail.com. The online version should be available soon where you would normally purchase eBooks.

My Dad received the first copy and I was able to watch him open the box and view the book via FaceTime.  How exciting!! 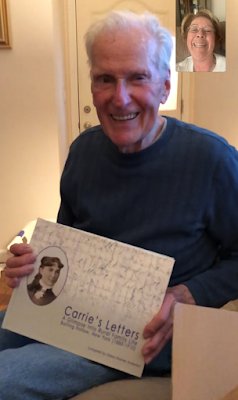 I know, without a doubt, that this is the most important genealogical project that I will ever do. I am so grateful to all who have helped me accomplish this and who have encouraged me along the way. I couldn't have done it without all of you.  This truly was a group effort!