Making Meaning out of a Pile of Family Photos

Frequently, as a genealogist, I wonder how to best present the information I have found on my ancestors for others to enjoy.  This summer I was so excited to find pictures (from Ella Terry Billard), many from the 1870s.  WOW!!!! These are the oldest photos I have ever been able to find on my ancestors.

As I looked at the labeled (Thank-you Great Aunt Ella Terry Billard for doing this) photos in the beautiful burgundy colored album I quickly realized they were from the Robinson and Terry lines.  I could see the connection immediately and realized the importance of this discovery.  (See post Seven Generations of Photos).  Many of the people in the photos were mentioned in Carrie’s Letters. (See posts on Carrie’s Letters)

My dilemma was how to present the photos to my cousins so that they were more meaningful then just a group of pictures. 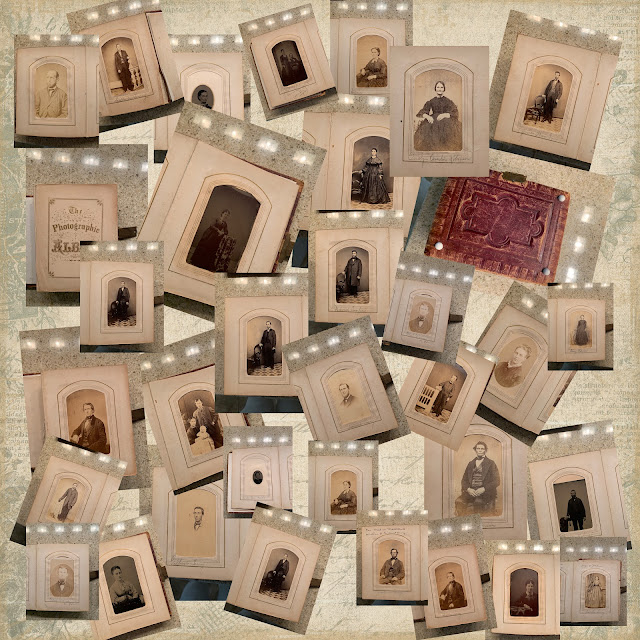 After cropping the photos and cleaning them up in MyHeritage’s new photo enhancement program I decided to put each family group together with the parents at the top of the page and the children, with spouses, on the rest of the sheet.  The album the photos were in was also very important to me as it held this amazing collection of photos safe for so many years.  After working in Adobe Photoshop I thought the following might be a more meaningful way to display the photos of the Robinson family and the connection they share within the family: 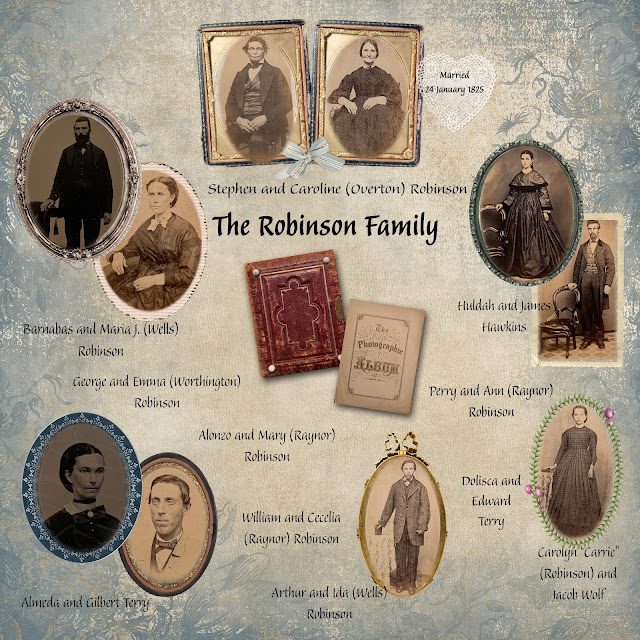 and the Terry family: 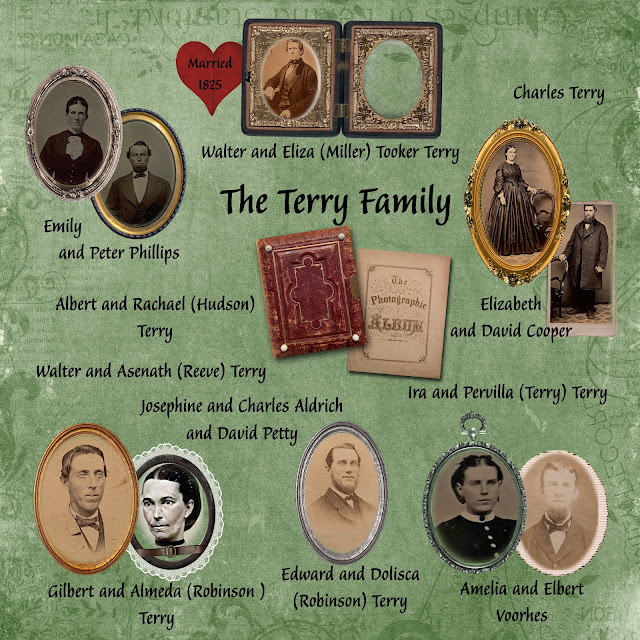 What do you think of this as a way to display the photos?  Unfortunately, there is no photo of Eliza, the matriarch, of the Terry family.

By displaying the photos in this manner I noticed several things I hadn’t noticed before.

Several of the photos in this group were unidentified.  These photos have to be members of either the Robinson or Terry families since they are part of this collection.  Hopefully, someone will see this and be able to help identify the following pictures that are not labeled so they can be added to the correct family group.

Have you ever seen any of these photos of our Robinson and Terry families?  Thank-you cousin Rebecca for sharing these photos!

Hopefully, for my Robinson and Terry cousins, these photos will help solve the mystery of what some of their ancestors looked like.  If you have photos of someone in the family that I haven’t found yet, please, share them with me so I can add them to the sheets.  I wonder how many we can find?  If anyone would like a copy of an individual photo please email me directly and I am happy to share this magnificent find.

Maybe over your Holiday Celebrations someone will remember old photos that are tucked away and need to be found again.  Merry Christmas to all and a very Happy New Year of wonderful finds to add in the knowledge of your ancestors!

Posted by Debby's Family Genealogy Blog at 9:57 AM