Grandma’s Scrapbook-Following Up On a Lead

Last week (3/13/16) I posted about information I found in my Grandmother’s Scrapbook.  The information had to do with my paternal great-grandparents George and Sarah (Rowan) King’s 50th Wedding Anniversary celebration.  Among the items I found in the scrapbook was an article detailing the celebration.  In that newspaper article there was a reference made to a couple that were listed as ‘cousins’ of my great-grandfather George Washington King.  Who are Mr. & Mrs. Kris Haisloop?  I have never heard their names before.  I remembered another picture from the celebration.  Could they possibly be in this additional picture from the celebration?? 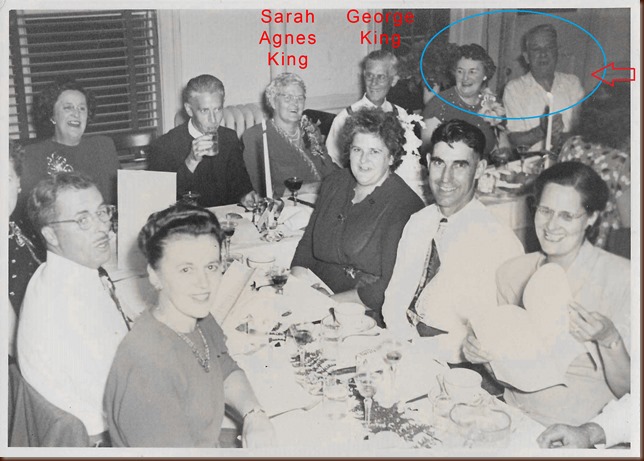 First, I got the names from the newspaper clipping and my quest began…. 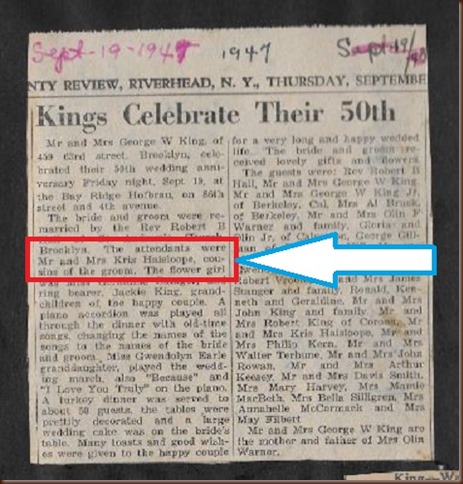 Then I  asked my Dad and his King Family cousins (who were young children in the family photo of the celebration) if they remembered the name Kris Haisloope?  No one seemed to remember the name.  I made a guess that George’s ‘cousins’ would be from his mother’s (Sarah Barry King) sisters since the name was not ‘Barry’ like his mother’s maiden name.

Next step was to search in census records for the name.  I took a chance that ‘Haesloop’ was not a common name and that they might live near or in Brooklyn close to my great-grandparents,  I also knew that George’s mother and family grew up in Brooklyn.  This is what I found in the 1930 US census:

I found a Christian and Isabella Haesloop living in Brooklyn.  Isabella was born in the US.  They would be 50 at the time of the 50th Anniversary party.  That would fit with the ages of the people in the photo.  George and Sarah were about 60-61 years old, so, that would fit as well. (click on the picture to enlarge)

Then I looked at the information in my Legacy Family tree (3 generation Descendant chart from Ebenezer) for the children of Ebenezer and Catherine (in yellow). 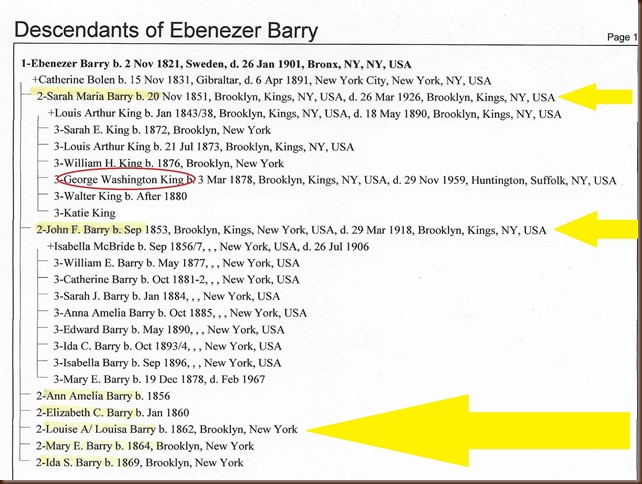 Next I started searching the children of Ebenezer and Catherine Bolen Barry.  Not too much information there.  I had primarily just done my direct line and not many of the siblings and descendants.  So, I started looking in the census records to try and figure out what the married names of the female descendants might be.  I was able to figure out Ida’s married name ‘Browning’ because I looked for Ebenezer (not so common name) who was living with her in the 1900 census (Catherine had died 1891).  Using US Census reports I was able to make some guesses as to married names of some of the daughters but had no way to prove the connection to the ‘Barry’ surname.  UGH!!

After searching (for hours and days) many different names and combinations, etc. I thought to check the Public Member Trees on Ancestry.  I found several trees where Ebenezer and Catherine were listed with a varying amount of information for their children.  I looked and looked (a lot of the families had 8-10 children to follow down), wrote emails to several owners of the ‘trees’ to see if there might be a family connection and finally at 10:45 pm on Thursday there it was –the name Haesloop in one of the branches of a tree!  YEA!!!  This was so exciting but who could I call at 10:45 to share that excitement!!  I again wrote an email to the owner of that tree that finally contained the name I was looking for to thank Chris for posting his tree and doing so much research.

I have since heard from Chris and Allison who are both descendants of Ebenezer and Catherine.  I found them due to their Public Member Trees on Ancestry which helped me make the cousin connection between my great-grandfather George Washington King and Isabella Griffin Ward Haesloop.  Now I have made that connection (YEA), have a picture of them (?), hopefully have 2 new cousins in Chris and Allison that I can get to know and about 42 new people to add to my tree (always remember to double check what you find on the internet) and all because of my Grandmother’s Scrapbook.  Thanks again Grandma for helping lead me to these connections!  What a week!!

If you have any additional information or stories to share I would enjoy hearing them.