Silas Bailey was my 3x Great-Grandfather.  I seem to know very little about Silas.
I believe he was born in New Jersey about 1795 or 6.  His parents are probably Eunice Buckbee and Nathaniel Bailey.

He moved to Tompkins County New York in the early 1800s where he met and married a local girl named Sarah Cornell.

They had the following children:

Where Silas lived according to the records I have been able to locate:

Silas died, according to the US Federal Census, Mortality Schedule in December 1869 of Dropsy of the Heart at the age of 74.  The record confirms his birth in New Jersey and parents are not reported to be of foreign birth and he was listed as a Farm Laborer.  (Thanks to Causes of Death in the Late 19th Century mentioned in the Register of Deaths, 1893-1907 by Karin L. Flippin  that Dropsy was considered to be an unnatural accumulation of serous fluid around an organ such as the heart.)


Chemung Co-Tompkins County-Schuyler County
(I always need a map as a reference.  Click on images to enlarge,) 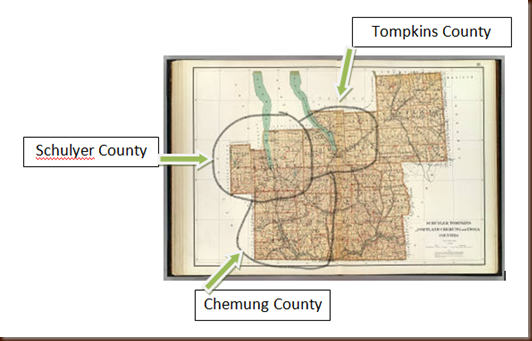 I wonder if since Silas was a Farm Laborer they moved around following his getting work?  He stayed in Upstate NY but seemed to moved within and around several counties.

Thanks to my cousins Wendy and Madeline for knowing who Silas’ parents were.  This work definitely takes a village to piece together especially when we get back this far.