What can I learn about Charlotte R. Bailey Cornell?

What can I possibly learn about my maternal 2x great-grandmother Charlotte R. Bailey Cornell who lived in Upstate New York?

Charlotte is circled in red and this is the only picture I have of her.  Her son William, my great-grandfather is standing behind Charlotte and my grandmother, Edna Cornell Hammond, is the youngest child and to the left of Charlotte in the picture.
What I already knew about Charlotte: 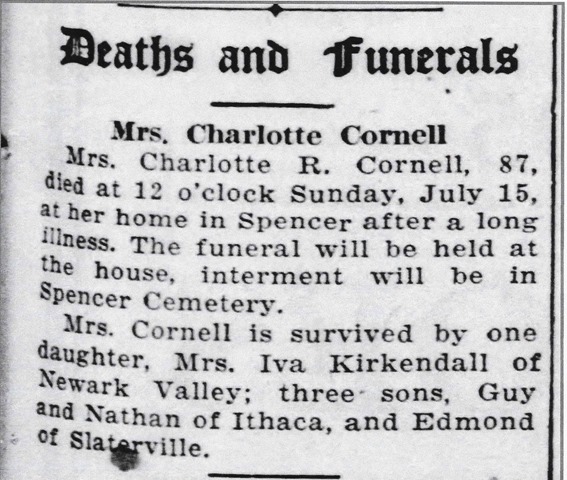 from The Ithaca Journal published 16 July 1928 and available on Newspapers.com
I think it’s interesting that my great-grandfather, and Charlotte’s son,  William Cornell was not listed in the obituary as he was also still alive at the time of her death.  Charlotte outlived 5 of her children and her husband Joseph.  (see post Civil War-Certificate of Disability for Discharge)

Thank goodness for small local newspapers who kept records of the minor comings and goings of their inhabitants.

Now I would like to get a copy of Charlotte death certificate.  I wonder what happened to Josephine who must have died before the 1875 census?  I wish I could find more pictures or Bible entries.

If you have any corrections or additions or stories to share I look forward to hearing them.
Enjoy the journey,
Debby
Posted by Debby's Family Genealogy Blog at 5:07 PM