Land records can share such interesting details of our ancestors’ lives. I became interested in land records after transcribing my paternal great grandmother’s letters (see Carrie’s Letters). Finding the land records that matched the land purchases Carrie Terry Warner talked about in her letters was exciting.

Carrie was a young teacher of 22 years who taught in Baiting Hollow, New York and while there would meet and marry my great grandfather, John Benjamin Warner, in 1885.
The following is an except from a letter Carrie wrote to her mother, Almeda Robinson Terry, on 30 October 1884:

“ With few exceptions I like my school very much, and I think I am generally liked by the pupils. I have not heard from the parents yet. The school is increasing slowly. I have twenty seven pupils now.”

and
“O! What a lot of work to get water here. We have no water at the school house and haven’t had since I have been here. There is a cistern there but no water in it.”

This led me to think about the school itself. Today I believe the school building stands where the Baiting Hollow Library is on Sound Avenue. I wondered what I could find out about the school? I had copies of several old maps that showed the location of the school: 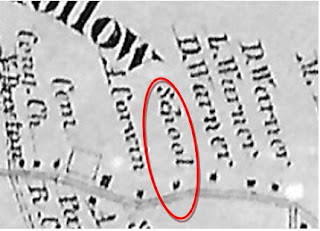 1858 map of Baiting Hollow from the Suffolk County Historical Society 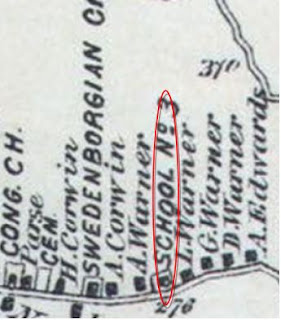 After looking at the maps I started wondering about the land for the school? Was the land leased, donated or sold to someone for a school? Could my ancestors, who in 1873 lived on both sides of the school have donated or sold the land for the school? Would I ever be able to find the answer? I tried to find records for the “Baiting Hollow School” to no avail and thought I might never know the answer. School records that far back are definitely hard to find. Oh, well, maybe someday I will find the answer.

Fast forward a few years to December 2018. Over the Holidays I was in Riverhead and searching for land records at the Suffolk County Center for my great grandfather John B. Warner.  Land he purchased or sold would help tell the story of his life. While searching for John’s records I stumbled upon the following: 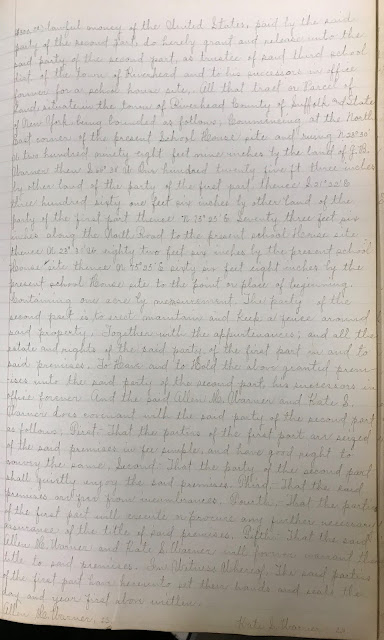 Success! Another question answered. I did find the land transaction for School District #3 in Riverhead, commonly known as the Baiting Hollow School. Previously, I had searched under the wrong name for the school. This added some interesting facts to the story of my ancestors’ lives and their involvement in their community.

As always, one question answered leads to other questions…I wonder how the original school came to be at this site years before? How many years before the map above in 1858 did the school exist at this site?

I also stumbled upon some  additional School District #3 records from the early 1800s at the Riverhead Town Historian’s Office. Stay tuned to find out about those.