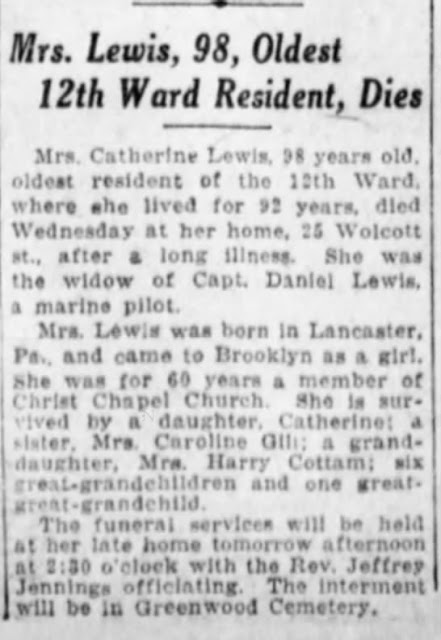 found on Newspapers.com originally from the newspaper The Brooklyn Daily Eagle 9 Jul 1927 page 2


Mrs. Lewis, 98, Oldest 12th Ward Resident, Dies
Mrs. Catherine Lewis, 98 years old, oldest resident of the 12th Ward, where she lived for 92 years, died Wednesday at her home, 25 Wolcott St., after a long illness.  She was the widow of Capt. Daniel Lewis, a marine pilot.
Mrs. Lewis was born in Lancaster, Pa., and came to Brooklyn as a girl.  She was for 60 years a member of Christ Chapel Church.  she is survived by a daughter, Catherine; a sister, Mrs. Caroline Gill; a granddaughter, Mrs. Harry Cottam; six great-grandchildren and one great-great-grandchild.
The funeral service will be held at her late home tomorrow afternoon at 2:30 o’clock with the Rev. Jeffrey Jennings officiating.  The internment will be in Greenwood Cemetery.

Some thoughts:
If you have any corrections, additions or stories to share I look forward to hearing them.
Enjoy the journey,
Debby