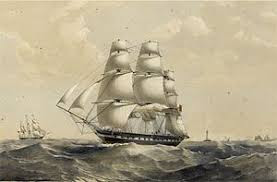 Sailing vessel in the 19th century

182 years ago today my paternal 3x great-grandmother Anne Meenan (Rowan) arrived in the Port of Philadelphia, Pennsylvania!
What was that like for her? 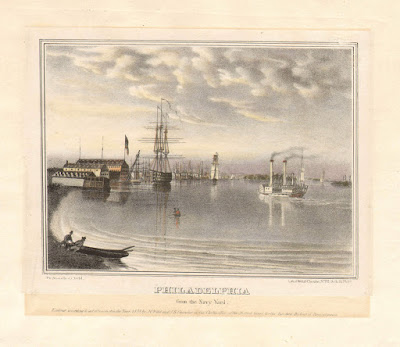 This print was done about the same time period and I wonder if this is what it looked like when Anne’s ship first came in to the harbor? 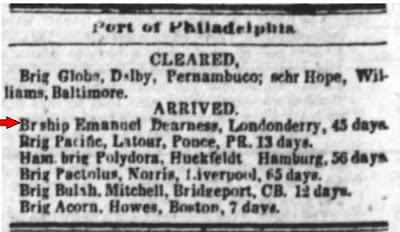 Anne arrived, listed as a Spinster at the age of 25, in Philadelphia on the 4th of August 1837 onboard the British Ship Emmanuel. The Master of the ship was John Dearness. She left from Londonderry, Ireland (Northern Ireland today) and the trip took 45 long days (leaving on 21 June 1837).
What was happening at the time:
·        In 1837 an oratory by Daniel O’Connell to the British Parliament helped focus Europeans’ attention on Ireland stating, “The Irish poor-a third of the population-had no food except the potatoes they grew, and not enough clothing to cover themselves.  They went hungry for two months of the year, and half-naked for all the year.”  Yet this would be their last “good” decade before more than a million of them would vanish into unmarked graves in the 1840s.
·        4 March 1837 Martin Van Buren became the 8th President of the United States
·        10 May 1837 (Panic of 1837)  NY Banks fail and unemployment reaches record levels
·        20 June 1837 -Queen Victoria gained the British throne

Originally an Emigrant Savings Bank Record (See post- SUCCESS!! Emigrant Savings Bank-Ann Meenan Rowan) stated that Anne had arrived in 1837 from County Monaghan, Ireland.  An Immigration card for Anne documented her arrival in Philadelphia, not New York as I had believed: 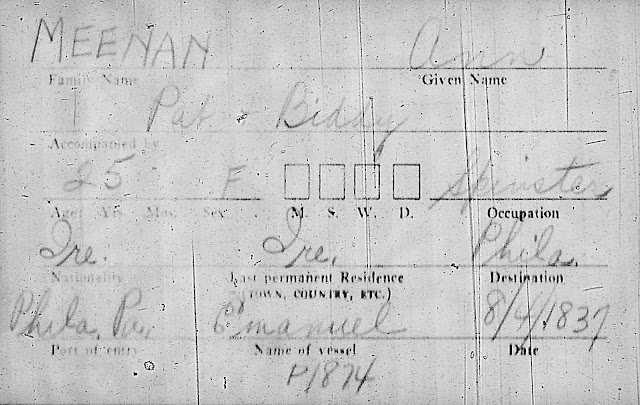 Eventually the ship’s passenger was discovered: 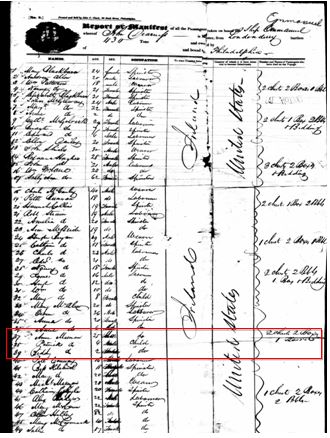 
Transcription from the top of the Passenger List:
Report or Manifest of all the Passengers taken on board the Ship Emmanuel whereof John Dearness, is master, from Londonderry, Ireland, burthen 430 tons and owned by ____________ of _____________ and bound to Philadelphia.
Columns represent: Names, age, occupation, the country to which they severally belong, the country of which they intend to become inhabitants, and baggage
On an earlier manifest from July 1837 for the Emmanuel I found the following statement by the Master of the ship. I assume he would have declared the same for the arrival on the 4th of August:


*I, John Dearness, do solemnly, sincerely, and truly swear, that the within REPORT and LIST, subscribed with my name and now delivered by me to the Collector of the District of Philadelphia contains, to the best of my knowledge and belief, the Names, Age, Sex, and Occupation of all Passengers, together with the name of the Country to which they severally belong, and that of which they intend to become Inhabitants, which were on board the Ship Emmanuel whereof I am at present Master, at the time of her sailing from the Port of Londonderry or which have at any time since been taken on board said vessel. And I do likewise swear, that all matters whatsoever in said Report and List expressed are, to the best of my knowledge and belief, just and true. 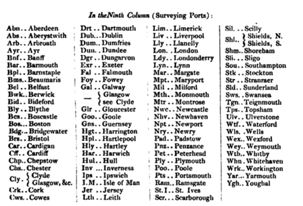 Lingering questions:
Learning about the ship and what was happening at the time Anne arrived in America gave me so much more of a feel for what it must have been like for her.  Oh, how I wish there was a diary or letters to tell of her daily experience on the ship.  I know she made it safely from great poverty in Ireland to a fresh beginning in America 182 years ago today.