Death and Obituary for MM Coolbaugh

My maternal 3x great-grandfather, MM Coolbaugh died on the 13th of September 1879 at the age of 58.  His death is noted on the US Federal Census Mortality Schedules for 1880.  Schedule 5, lists “Persons who died during the year ending May 31, 1880, enumerated by me in the Monroe Township, in the County of Bradford, State of Pennsylvania, U M Pratt, Enumerator.” 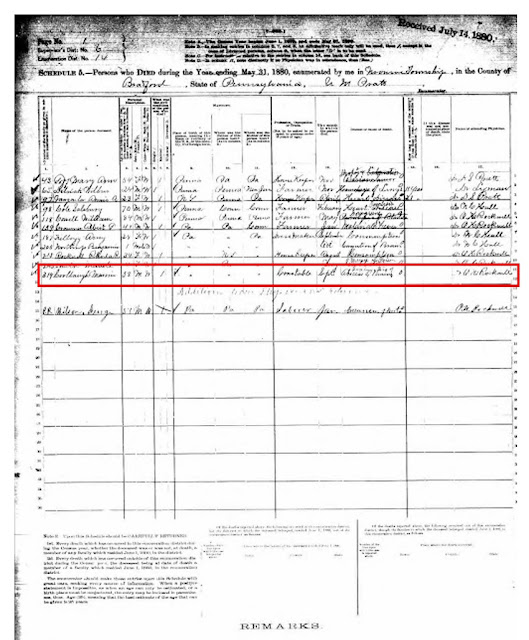 MM’s obituary was listed in the Bradford Reporter on Thursday, Sept. 18, 1879:

Marvin M. Coolbaugh, an old and respected citizen of Monroeton, died at his residence in that village on Saturday last, aged 58 years.  He was buried on Monday.  The burial services were conducted by the Order of Odd-Fellows.

For more information on the life of Marvin M. Coolbaugh see posts MM Coolbaugh and Tombstone Tuesday with a Twist.

If you have any corrections, additions or stories to share I look forward to hearing them.