Election Day-Ever Wonder if Your Ancestors Were Involved in Politics 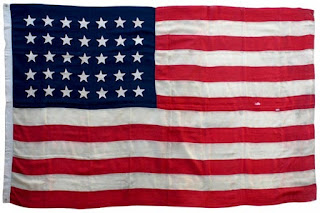 Recently, while doing some research on my maternal 3x great grandfather Marvin Milton Coolbaugh, I found the following information in Newspapers.com that added yet more richness to MM’s life story and answered the question about an ancestor being involved in local politics.

On 30 July 1857 the Bradford Reporter reported the following:

The duties and specifics are called out in the article so it is clear what the delegates are required to do and when. And there it is, my ancestor was a delegate for Monroe Township.

On 11 October 1860 in the Bradford Reporter MM Coolbaugh was once again in the news: 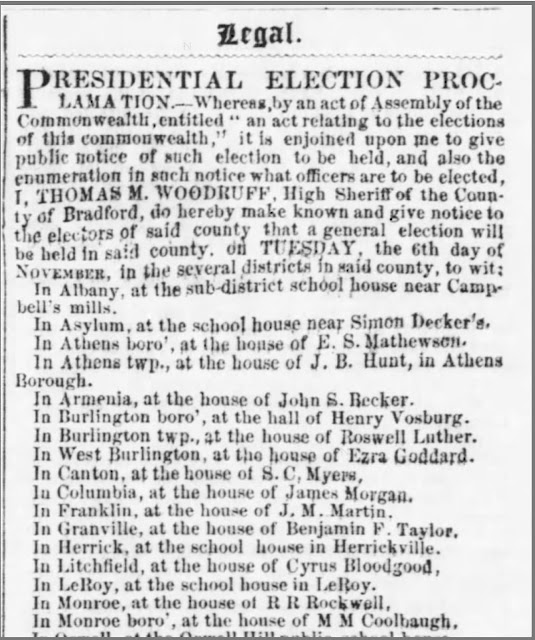 This time “I, THOMAS M. WOODRUFF, High Sheriff of the County of Bradford, do hereby make known and give notice to the electors of said county that a general election will be held in said county, on TUESDAY, the 6th of November, in the several districts in said county, to wit:”

(In Monroe boro', at the house of MM Coolbaugh)

Historical perspective: Abraham Lincoln won the election against Stephen Douglas on 6 November, 1860 and was inaugurated as the 16th President, and the first Republican president, on 4 March 1861.  Wow!  People voted for the President of the United States in my ancestor's house.

On 12 September 1861 the Bradford Reporter MM Coolbaugh is once again in the news: 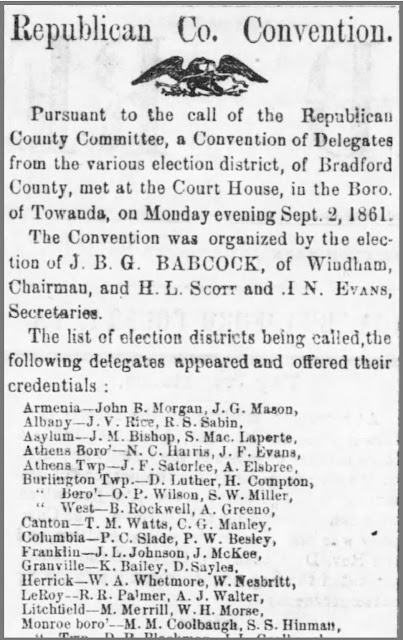 “Pursuant to the call of the Republican County Committee, a Convention of Delegates from various election district, of Bradford County, met a the court House, in the Boro. Of Towanda, on Monday evening Sept. 2, 1861.”

“The list of election districts being called, the following delegates appeared and offered their credentials:”

From an article published in the Bradford Star on 23 January 1902 I know that MM Coolbaugh was a Constable in Monroe, Bradford County, PA in 1849. I wonder if being a Constable contributed to his becoming involved in local politics? Did he hold strong beliefs about slavery and state’s rights? 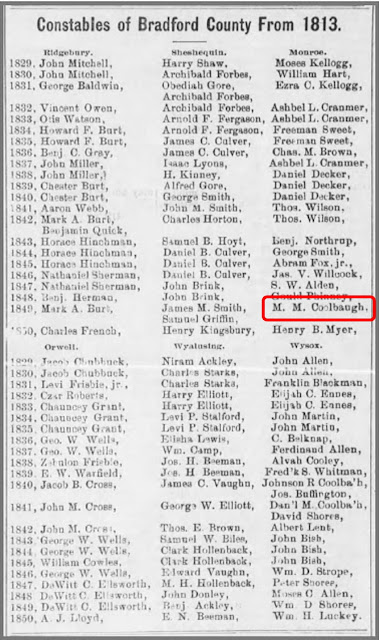 Regardless of your political affiliations or beliefs, it’s always exciting to find out that your ancestors were part of history by taking part, even in a small way, in the shaping of our countries’ history.

If you have any corrections, additions or stories to share I look forward to hearing them.
Enjoy the journey,

Posted by Debby's Family Genealogy Blog at 5:00 AM