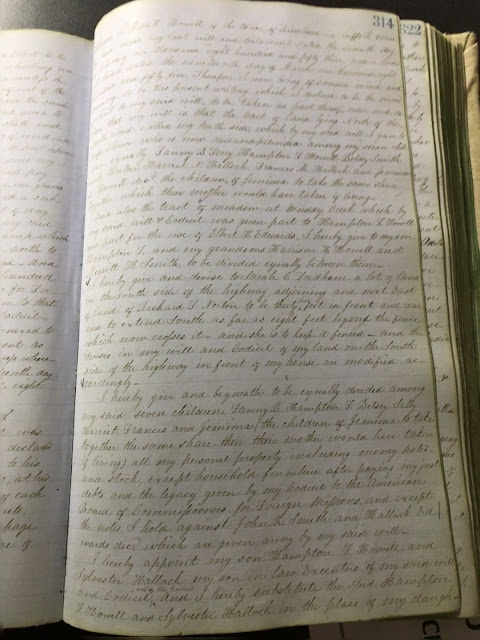 (click on image to enlarge)
Transcription:
Whereas I, Meritt Howell of the town of Riverhead in Suffolk County have made my last will and testament I hereby give and bequeath to be equally divided among my said seven children, Fanny B., Hampton F., Betsey, Sally, Harriet, Francis and Jemima (the children of Jemima to take together the same share their mother would have taken if living) all my personal property including money notes and stock, except household furniture after paying my just debts and the legacy given by my Codicil to the American Board of Commissioners for Foreign Missions, and except the notes I hold against John K. Smith and Hallock Edwards decd [deceased] which are given away by my said will_
I hereby appoint my son Hampton F. Howell and Sylvester Hallock my son in law Executors of my said will and of this Codicil and I hereby substitute the said Hampton F. Howell and Sylvester Hallock in the place of my daughter Sally Edwards as Trustees of the lands given by my said Will and Codicil for the use of my grandson Elbert H. Edwards and it is my will that they shall take the said lands with the same powers & for the same purposes (&subject to the same legacy to the said Sally Edwards might have taken them under the said Codicil, and that they shall furnish the said Elbert a house and support and ordinary schooling till 21 years old (unless he shall sooner marry) out of the income of such property_And I hereby annul so much of said Will & Codicil as gives to Sally Edwards any fire wood or cordwood out of said lands_ I desire that this Codicil may be annexed to & taken as a part of my said last will and testament as aforesaid to all intents & purposes_ In witness whereof I have hereunto set my hand & seal this eleventh day of November one thousand eight hundred and fifty seven_
Merritt Howell L.S. 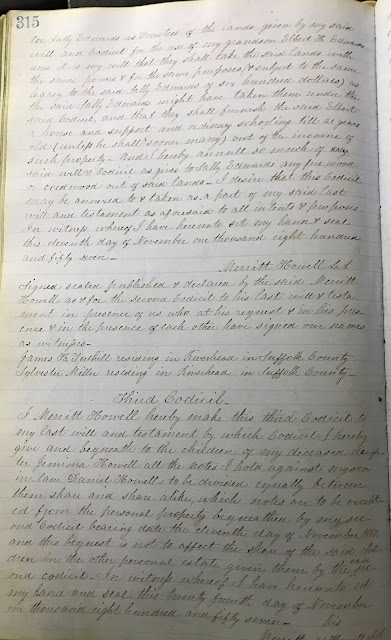 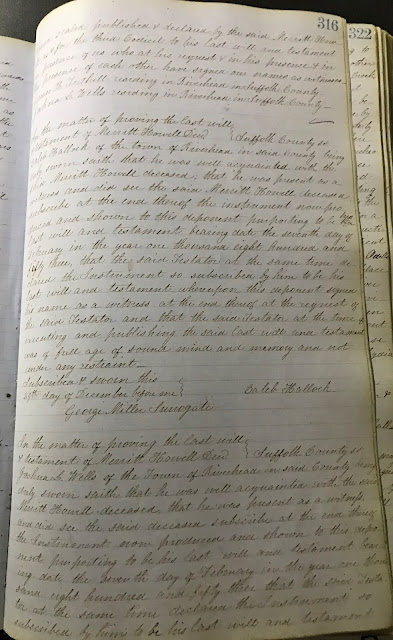 Transcription:
I, Merritt Howell, hereby make this third Codicil to my last will and to testament by which Codicil I hereby give and bequeath to the children of my deceased daughter Jemima Howell all the notes I hold against my son in law Daniel Howell to be divided equally between them share and share alike, which notes are to be executed from the personal property bequeathed by my second Codicil bearing date the eleventh day of November 1857, and this bequest is not to affect the share of the said children in the other personal estate given them by the said second Codicil_In witness whereof I have hereunto set my hand and seal this twenty fourth day of November one thousand eight hundred and fifty seven_ his