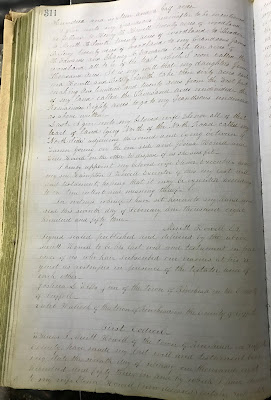 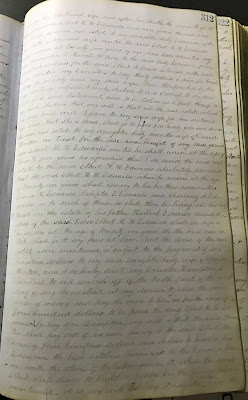 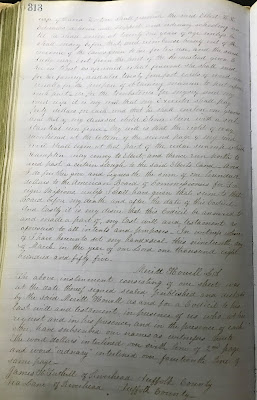 Whereas I, Merritt Howell, of the town of Riverhead in Suffolk County have made my last will and testament bearing date the seventh day of February one thousand eight hundred and fifty three, in and by which I have devised to my wife Elenor Howell (now deceased) certain real estate during her natural life and after her death the same to go to my grandson Elbert H. H. Edwards and have given the care and control of such real estate to my daughter Sally Edwards after the death of my said wife until the said Elbert H. H. Edwards shall arrive at twenty five years of age, and have directed my son Hampton L. Howell to pay to the said Sally Edwards four hundred dollars for the said Elbert to build a house with, and have directed my Executors to pay thirty dollars a piece for tombstones for myself and my said wife. Now therefore will by this my writing, which I hereby declare to be a Codicil to my said last will and testament, and to be taken as a part thereof, order and declare that my will is that all the real estate which in my said will I gave to my said wife for her natural life, now that she is dead, shall go to and I do hereby give and devise the said real estate to my daughter Sally now the wife of David Horton in trust for the use and benefit of my said grandson Elbert H. H. Edwards until he shall arrive at the age of twenty five years as aforesaid then I do devise the said real estate to the said Elbert H. H. Edwards when he arrives at the age of twenty one years shall convey to his brothers and sister James H. Edwards, Serepta E. Edwards and Chauncey A. Edwards or to such of them as shall then be living all his interest in the estate of his father Hallock Edwards deceased_ And if the said Elbert H. H. Edwards shall die before he arrives at the age of twenty one years the said real estate shall go to my heirs at law_ But the devise of the real estate above mentioned is subject to the payment of six hundred dollars to my said daughter Sally, wife of David Horton, and I do hereby direct my Executor Hampton L. Howell to sell enough off of the North part of the west half of my homestead, at my decease to said the said sum of money and pay the same to her_ as for the sum of four hundred dollars to be paid the said Elbert H. H. Edwards by my son Hampton, my will is that the said Hampton shall pay out of his own money to the said Elbert the sum of four hundred dollars and deliver to him or his _ the back kitchen answered to the __ I have in with the store of the cellar under it, when the said Elbert shall devise to build a house on the lands above mentioned_ it is my will that my daughter Sally, wife of David Horton, shall furnish the said Elbert H. H. Edwards a home and support and ordinary schooling until he shall arrive at twenty one years of age unless he shall marry before that, and reimburse himself out of the income of the lands given to her for his use, and the said Sally may cut from the part of the homestead given to her in trust as aforesaid what firewood she shall need for her family, and also twenty four foot cords of wood annually for the purpose of obtaining manure to put on __ part_As for the tombstones for myself and my said wife it is my will that my Executor shall pay forty dollars for each and that he shall enclose one graves and that of my deceased child Elenor Ann with a substantial iron fence_My will is that the rightof way mentioned at the bottom of the second page of my said will shall begin at that part of the cedar swamp which Hampton may convey to Elbert’s land_And I do further give and bequeath the sum of one hundred dollars to the American Board of Commissioners for Foreign Missions, unless I shall have given that sum to that Board before my death and after the date of this Codicil_ And lastly it is my desire that this Codicil be annexed to and made a part of, my last will and testament as aforesaid to all intents and purposes_In witness where of I have hereunto set my hand & deal this nineteenth day of March in the year of our Lord one thousand eight hundred and fifty five.
Merritt Howell L. S.

The above instrument consisting of one sheet was at the date thereof signed sealed published and declared by the said Merritt Howell as and for the Codicil to his last will and testament, in presence of us who, at his request and in his presence, and in the presence of each other, have subscribed our names as witnesses thereto. The word “dollars” interlined over sixth line of 2nd page and word “ordinary” intertwined over fourteenth line of same page_
James H. Tuthill of Riverhead Suffolk County
Ira Land of Riverhead Suffolk County


Some major changes in life and interests have led to this first Codicil.  There are two more Codicils to learn from.  Merritt would live for two more years.  How will Merritt’s wishes change in the next Codicil?