I thought I would see what I could find out about my paternal 3x Great-Grandmother Caroline Overton Robinson. 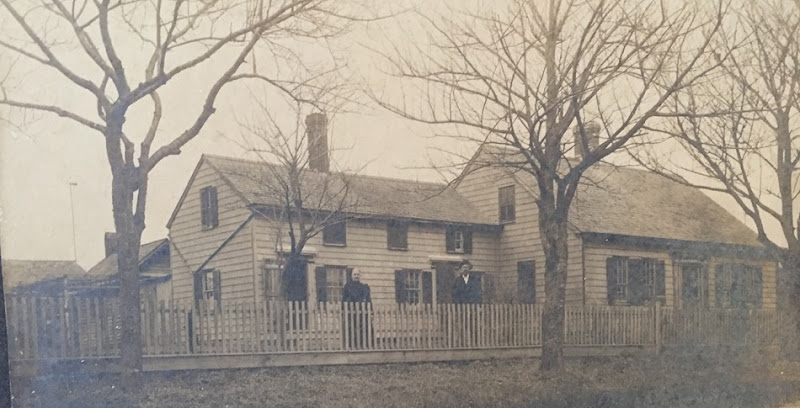 believed to be Stephen and Caroline outside their farmhouse
(photo compliments of cousin Rebecca)
What I learned about Caroline:

from the Traveler Watchman Newspaper, 26 March 1897 in the Mattituck section; 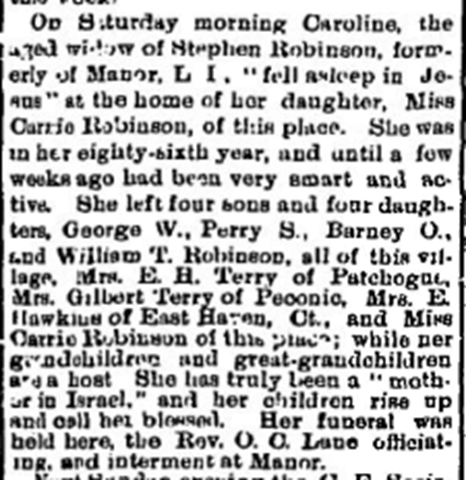 Transcription: On Saturday morning Caroline, the aged widow of Stephen Robinson, formerly of Manor, LI “fell asleep in Jesus” at the home of her daughter Carrie Robinson, of this place.  She was in her eighty-sixth year, and until a few weeks ago had been very smart and active.  She left four sons and four daughters, George W., Perry S,. Barney O., and William T. Robinson, all of this village, Mrs. E.H. Terry of Patchogue, Mrs. Gilbert Terry of Peconic, Mrs. E. Hawkins of East Haven, Ct., and Miss Carrie Robinson of this place; while her grandchildren and great-grandchildren are a host.  She has truly been a “mother in Israel.” and her children rise up and call her blessed.  Her funeral was held here, the Rev. O.C. Lane officiating, and interment at Manor. (Now known as Manorville)

She is buried with her husband in Brookfield Cemetery, Manorville, Suffolk County, New York.


If you have any corrections or additions or stories to share I look forward to hearing them.
Enjoy the journey,
Debby
Posted by Debby's Family Genealogy Blog at 8:52 PM