I remember my paternal grandmother Agnes telling me a story about our family being related to Arch Bishop John Hughes who founded St. Patrick’s Cathedral in New York City.  She said that her mother Sarah Rowan King (See blog post Finding My Irish Roots-First Steps) had taken her and her sisters Anna and Sadie once to see the grave of the Arch Bishop in the crypt under St. Patrick’s Cathedral in New York City.

Arch Bishop John Hughes
(photo found on Dead Fred website)
I have often thought of this family story and wondered if it is true and if so….how exactly are we related?  I thought perhaps it was time to research this and see what I could find out. 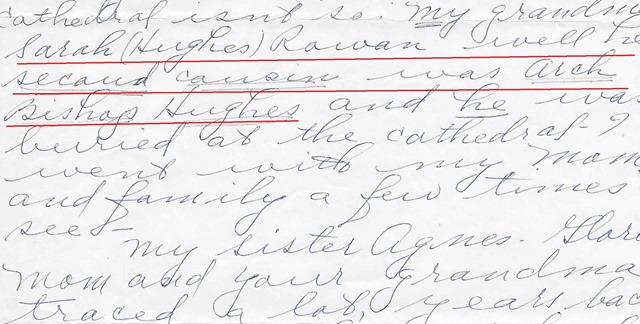 Transcription:  “My grandma Sarah (Hughes) Rowan well her second cousin was Arch Bishop Hughes and he was buried at the cathedral-I went with my Mom and family a few times to see.  My sister Agnes, Gloria’s mom and your grandma traced a lot, years before.”

This confirms what I remember my grandmother Agnes telling me but also gives me the idea that John and Sarah were second cousins.  Oh, how I wish I could have found the research she says my grandmother did.

I have tried repeatedly to go back from Sarah Hughes Rowan to find her parents Patrick and Susan McKenna Hughes.  This has become difficult since the name Patrick Hughes is a VERY common name.  I have found the following information:
So, this time I thought I would try to start with Arch Bishop John Hughes family and see if I can connect it to mine.  Since the Arch Bishop was such a famous person there is a lot of information available about his life.  While most of the information deals with him becoming a Roman Catholic Priest and his journey to become the Arch Bishop of New York City there is some family history that I can use.

I know that Patrick and Margaret Hughes came from Annalogham, County Tyronne, Ireland before coming to the United States.  I started to develop a family tree of the Arch Bishop’s family with information that I was able to find so far:

Michael and Patrick were married and had children.
Some final thoughts: