A few weeks ago I told the story of my search for which of my paternal ancestors, based on a family story, had served in the Civil War.  (See blog posts  Who Was the Civil War Veteran? and Is it the right John W. Rowan, Civil War Veteran?.) After an extensive search I obtained Civil War Pension records for my paternal great-great grandfather John W. Rowan.  With thanks to my cousin Craig for reviewing and transcribing some of the original records and helping me with researching the Regiments John was in. 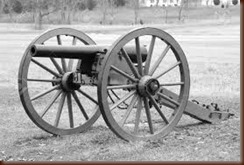 From John’s Application for an Invalid Pension and additional research we have put together a better picture of what we believe happened to John during the Civil War:
21st day of August 1862 - John W. Rowan enrolled at New York City in Company “D” 145th Regiment of New York Volunteers, to ‘serve 3 years or during the war’.

11th day of Sept, 1862 - John mustered into service as a ‘Private’ at Camp New York, Staten Island, in Co “D”, 145th Regiment of New York Volunteers.
From the National Park Service Battle Unit Details I was able to learn the following about the 145th Regiment:
26 June 1863 -  Reported ‘deserted’ on the roll for Sept & Oct 1863, reports him ‘straggled’ while on the March from Stafford, Virginia to Gettysburg, Pennsylvania.  June 26, 1863 he returned to his company for duty.  In researching the term “stragglers” I learned they were generally thought to have been men who informally took time off to recover from fatigue or illness.  This seemed to have been a problem since men were not granted leaves during this time period.  I wonder if John had been injured and was hospitalized during this time period or was one of the 50 men reported missing after the Battle of Chancellorsville?

photo from The Battle of Gettysburg (click on image to enlarge)
12 Jan 1864 - John is reported transferred to Co “H” 150 New York Vols.
Atlanta campaign:
20 July 1864 John was wounded in action.  (More to follow on the battle he was injured in and his injuries in a future post.)

I have not been able to verify yet all the battles John actually fought in that are listed above but it gives me an idea of what the Regiments went through during the Civil War.  Reminder, this was the first national draft in history.  I can’t imagine what it was like for this young man so far away from home and in the middle of War for so many battles.

The family story was that John enlisted at 14 and had a neighbor sign saying he was able to enlist.  Based on the records above it appears that John was 16 years old when he enlisted and 19 years old when he was discharged.  Still under the age of 18 which was the enlistment age.  I did find a listing that showed John W. Rowan and an aka James Rowan.  I would also like to investigate that name and see if that was the name he originally enlisted under since he was underage.

If you have any corrections or additions or stories to share I look forward to hearing them.
Enjoy the journey,
Debby
Posted by Debby's Family Genealogy Blog at 2:52 PM