The Fundamental Orders of 1639 and Andrew Warner

Growing up I’m not sure I ever heard of the document “The Fundamental Orders of 1639” when I was studying US History.  I did however, find my paternal 8th great-grandfather, Andrew Warner, had a connection to this document.  So, what is this document all about and what did Andrew have to do with it?

Andrew and Mary Humphrey Warner came to America in November 1631 settling in the Massachusetts Bay Colony.  Andrew was a very active member of the Puritan church where the Reverend Thomas Hooker preached.  In 1636 Thomas Hooker and  a group of about 100 followers (Andrew and Mary among them) decided to leave the Cambridge area because it was becoming crowded and search for a new fertile area where they could farm and have a new settlement of like minded people.  They reportedly walked for about 10-12 days to reach this new area which would later become known as Hartford, Connecticut.

In the spring of 1638 three Connecticut towns, Windsor, Hartford and Wethersfield, chose representatives and held a general court at Hartford.  Connecticut had been governing itself since Thomas Hooker led the band of Puritans away from Massachusetts in 1636. 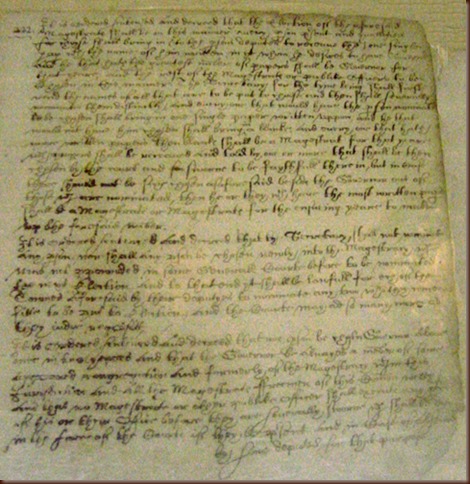 a copy of a page of the Fundamental Orders of 1639 from ConnecticutHistory.org

The Fundamental Orders was an agreement written that formed the basic law of the Connecticut colony.  The Orders were  formally adopted 14 January 1639 and contain 11 orders.  The Fundamental Orders gave men more voting rights than they had in Massachusetts and allowed more men to run for office. The Puritans had created in America the first written constitution, a set of laws or principles which govern a people.  Many consider this a precursor to the US Constitution.  You can read the entire Fundamental Orders of 1639 at https://constitution.org/bcp/fo_1639.htm at the Constitution Society.

I have been unable to find a list of the Representatives from Hartford or the names of the signers of the Fundamental Orders, so, I don’t know if Andrew was one of them but I do know he was very involved in his community throughout his life.  I was able to locate a map found though the Society of the Descendants of the Founding Fathers of Hartford.  I was able to determine that Andrew was a landowner

and where his land was located (Andrew’s property in red).  (click on images to enlarge) 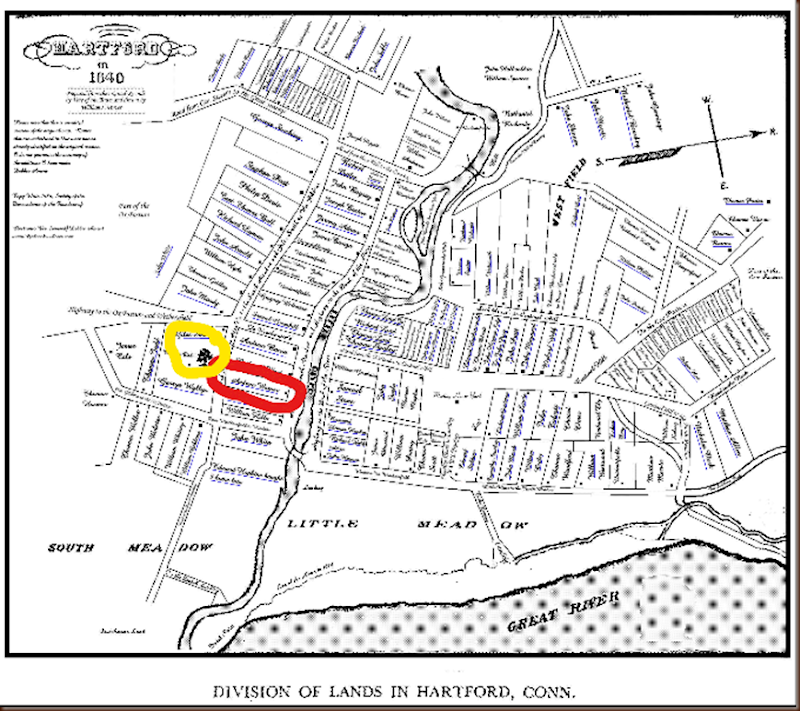 The original was drawn by William S. Porter based on original records of the town

I also see that Andrew’s property was near the Charter Oak (circled in yellow).  This Charter Oak was a landmark and symbol of Connecticut for many years.  There is a story or legend that the original Colony Charter was hidden in a hollow part of the tree and before that this tree was known to house Native American councils beneath it.  Today there is a monument erected in it’s place.

Did Andrew and his wife come over to America because of Thomas Hooker?  Why did they leave the Hartford settlement and move north to inland Massachusetts? 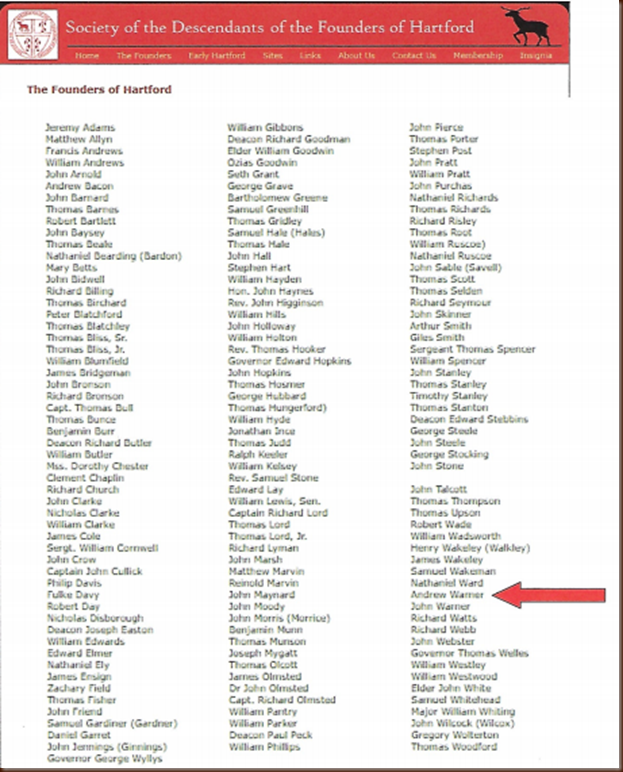 and WOW! another connection I have to the founding of America.  How exciting!   (see previous post about my Alden connection at It’s Official! I Proved It!)

I started this journey by searching on-line with “Andrew Warner” and “Hartford” to see what additional information I could find.  I knew he had moved to Hartford but knew little else.  That led me to the Society of the Descendants of the Founders of Hartford which led me to the 1640 map of Hartford and the Fundamental Orders of 1639 and a whole new history lesson about this country that my ancestor happened to be involved with.  Are your ancestors Founding Fathers of Hartford also?