Is it the right John W. Rowan, Civil War Veteran?

Last week in my post entitled Who Was the Civil War Veteran? I recounted my search to prove or disprove a family story about one of my ancestors on my paternal side being a Civil War Veteran.  I used the family story and research to determine which of my ancestors may have fit the criteria of the family story.  After I narrowed down my search to my paternal great-great grandfather John W. Rowan I then had to determine which of 4 John W. Rowan’s records to get.   All 4 men were listed as having served in Regiments from New York.  After additional research I decided to take the plunge and order copies of one of the John W. Rowan’s records.

You can buy services that will go to the National Archives in Washington, D. C., St. Louis or College Park and get scans of the records for you.  I used Twisted Twigs on Gnarled Branches Genealogy a service that offers NARA (National Archives and Records Administration) Record Retrieval Services.  It took me about 8 weeks to get my records instead of about 3-6 months through NARA.  A service I recommend if you are trying to get records.

YEA, the records have arrived!  How exciting but was it my John W. Rowan or someone else’s records that I ordered?  I downloaded the file of 81 pages and waited impatiently and with trepidation for the file to open…

and I instantly know that this is the right record!  This is the record of my paternal great-great grandfather John W. Rowan because Mrs. Sadie King is my great grandmother and John’s daughter!  YEA!!! HAPPY DANCE!!!

Here is one of Sadie’s letter to the Veteran’s Administration in 1940: 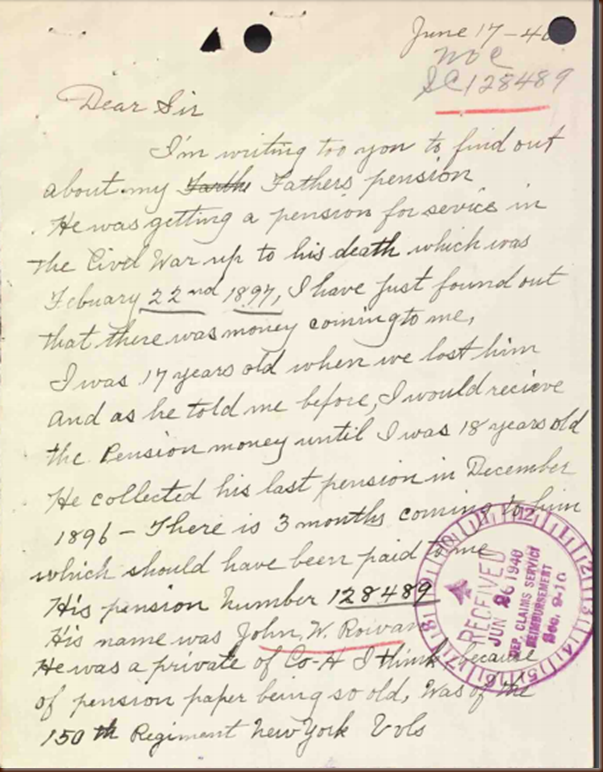 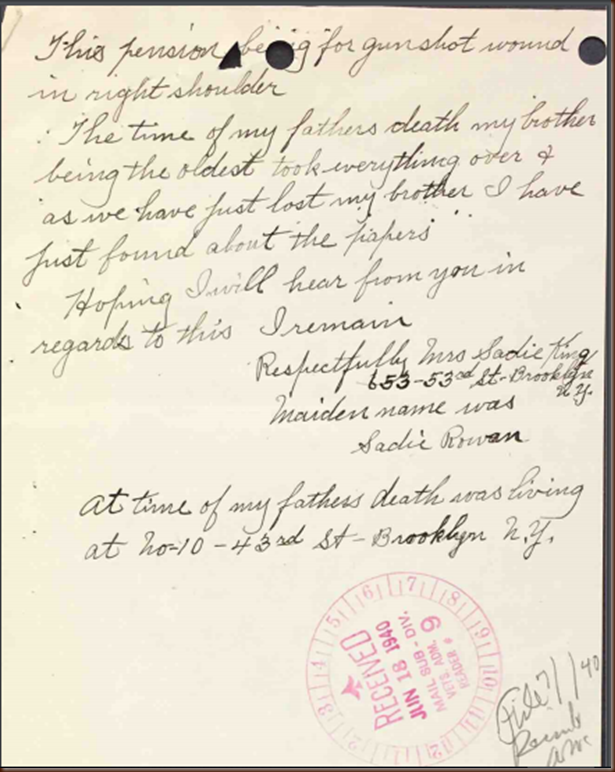 (click on image to enlarge)
Transcription:
June 17-40
Dear Sir,
I’m writing to you to find out about my Father’s pension, He was getting a pension for his service in the Civil War up to his death which was February 22nd 1897. I have just found out that there was money coming to me. I was 17 years old when we lost him and as he told me before, I would receive the Pension money until I was 18 years old. He collected his last pension in December 1896-There is 3 months coming to him which should have been paid to me. His pension Number 128489. His name was John W. Rowan. He was a private of Co-H. I think because of pension paper being so old, was of the 150th Regiment New York Vols. This pension being for gunshot wound in right shoulder. The time of my fathers death my brother being the oldest took everything over & as we have just lost my brother I have just found about the papers.
Hoping I will hear from you in regards to this I remain
Respectfully, Mrs. Sadie King
653-53rd St, Brooklyn, N.Y.
Maiden name was Sadie Rowan
At time of my fathers death was living at No-10-43rd St-Brooklyn, N.Y.

Wow!  What a treasure to have a copy of!  I am sure my family members will also enjoy reading this.  There is so much information here, some of which I already had but this is further conformation of where my great grandmother lived, etc.  I was only 2 years old when she died.  I have one vague memory that I can’t be sure is true of her reaching down to pick me up.  I had only heard my great grandmother referred to as ‘Nanny’ or ‘Mom’ and was surprised to see that she used ‘Sadie’. I never knew until this letter that the woman I knew from records as Sarah A. Rowan King used the name ‘Sadie’.  After finding this I asked family members and they all said yes, she used ‘Sadie’.  One of those things that you just don’t realize to ask about until you find something like the above letter.

My father and I went a few years ago and found where John Rowan is buried at Cypress Hills Cemetery in Locust Grove, Kings County, New York.  I was saddened by the fact that there was no headstone to identify where John is buried.  Now that I have identified him as Civil War Veteran I hope to petition the Veteran’s Administration for a headstone identifying John’s burial place and commemorating his Civil War service.  I’ll keep you informed and let you know if I am successful.

Now on to the other 80 pages of records in the record set I received.  How and where was John injured?  From the above letter I see he was shot in the shoulder and not in the leg as family members heard.  What battles was he in?  Did he enlist at 14 years of age?  Definitely more to follow on John W. Rowan, Civil War Veteran.