WHAT IS SEPIA SATURDAY?
“Launched by Alan Burnett and Kat Mortensen in 2009, Sepia Saturday provides bloggers with an opportunity to share their history through the medium of photographs.  Historical photographs of any age or kind (they don’t have to be sepia) become the launchpad for explorations of family history, local history and social history, in fact or fiction, poetry or prose, words or further images.”  This week’s theme any of the following- Children: Dogs: Prams: Sticks 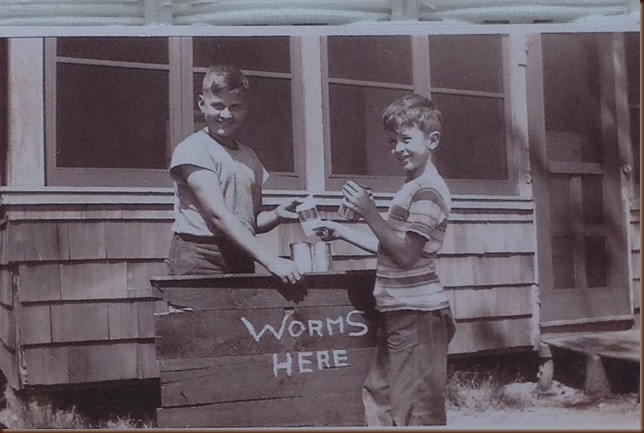 My grandparents owned and ran a duck farm on Eastern Long Island about 60 miles east of New York City.  On the southern end of the property was the Peconic River.  My grandparents had several bungalows near the river and wooden row boats.  In the summer, and before central air conditioning,  my grandparents, aunt and father would stay in the bungalows because it was a little cooler there.  A vacation of sorts.

My grandmother’s family was from Brooklyn and would frequently come out to the ‘country’ and stay in the bungalows also.  My Dad recounts what fun it was to have cousins around and to go out fishing on the river.

One summer my dad, on the left, and his cousin Warren Earle decided to build a worm stand.  They dug their worms, placed them in tin cans with some dirt and were ready to sell them to the fishermen that would rent the rowboats from my grandparents.

I love this picture of an innocent time when young boys figure out a way to have fun and make some money during  a lazy summer.  The bungalows haven’t been used in over 50 years and have fallen down but what a great memory of a time gone by.
What would it be like to have those days of no TV, telephones or gaming systems back for kids in the Summer?

Be sure to check out other Sepia Saturday posts by going to http://sepiasaturday.blogspot.com/