In my last two posts I have followed the life of my paternal great uncle Gerald Warner (The Childhood of Gerald Gilbert Warner and The Adult Life of Gerald Gilbert Warner). I know that Gerald moved from Long Island, New York to South Dakota about 1912-1913. According to the 1930 and 1940 US Federal Census records Gerald rented a home but was listed on the Farm Schedule. Hmm…what does that mean?

When I searched FAQs about the 1930 Farm Schedules I found that most of the Farm Schedules are missing. So, no help there. I did find the following information about crops in Brule, County:

Before I started searching for a land record I needed to know about the land in the area. I am used to searching for land records back East where the system of Metes and Bounds (system of describing the land or real estate commonly used in the East based on a system used in England) is used when surveying land. What system is used in South Dakota? (I like to go to the FamilySearch Wiki to start my research.) South Dakota uses the rectangular land survey system of section, township and range. Townships were six-mile square blocks of land, divided into 36 one-mile squares called sections. The township was numbered north and south, starting from the centerline, and the range was numbered east and west starting from the centerline.

Gerald lived in Brule County. This is the map of the counties in South Dakota in 1930: 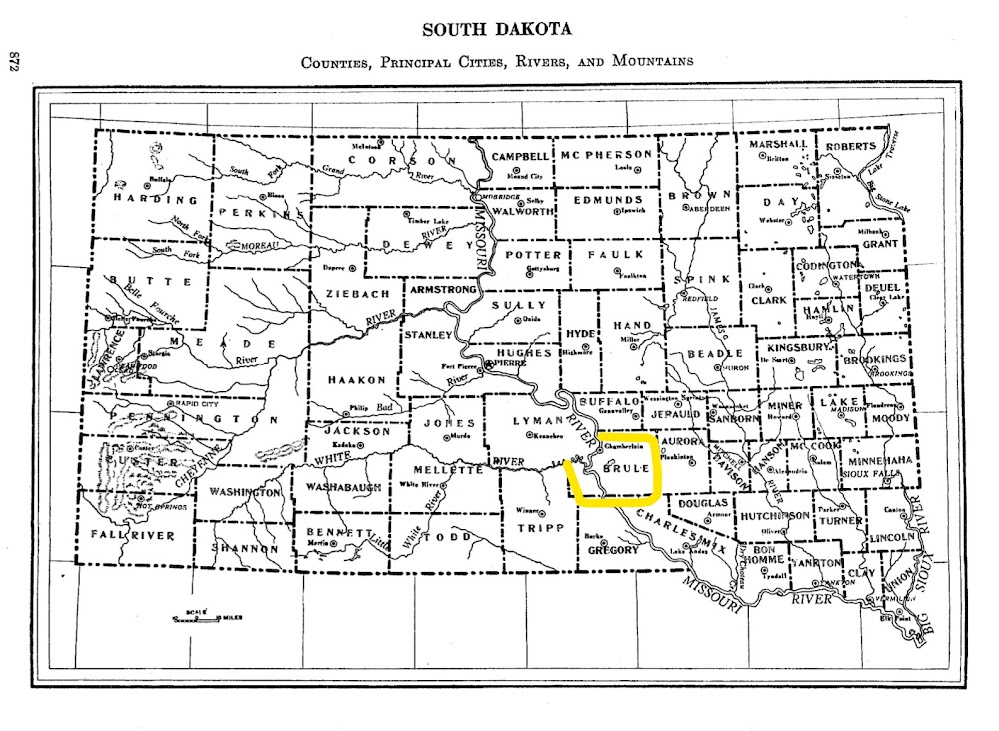 According to the FamilySearch Wiki on South Dakota: When South Dakota was acquired by the United States most of the land became public domain. The federal government surveyed the land into townships and transferred the land to private ownership through local land offices. The first land office was established at Vermillion, South Dakota in 1861. Land could be obtained by paying cash or by Homesteading after 1862. The records for these transactions are in the County Clerk or Recorder’s Offices.

Chamberlain, South Dakota is the County Seat for Brule County. I began looking in the Index book of Grantors and Grantees but nothing was listed for Gerald Warner as Grantee (buying land) in the land records. I had previously noted that on both his World War I and World War II Draft Registration Cards Gerald signed his name as G G Warner. Ah, there it was… G G Warner purchased land in Plainfield County in 1923. That has to be my Great Uncle Gerald! This is the land deed I was able to locate: 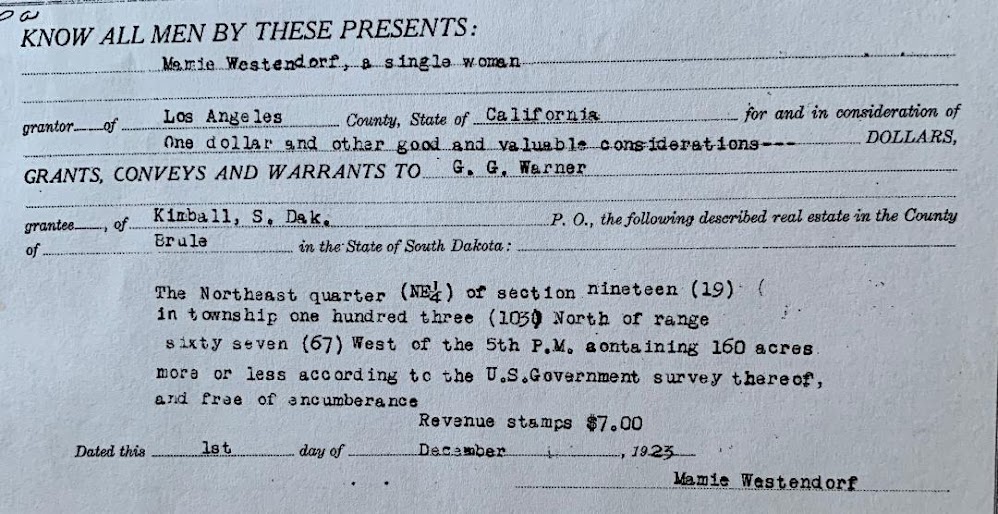 Transcription:  1 December 1923.  The Northeast quarter of section 19 in township one hundred three  North range sixty seven West of the 5th P.M. containing 160 acres more or less according to the US Government survey thereof, and free of encumbrance.  Revenue stamps $7.00.

Gerald bought the land from a woman named Mamie Westendorf, a single woman from Los Angeles, for the price of one dollar and other good and valuable considerations.  I wonder what those were?  The Register of Deeds said there is rarely anything other than $1.00 listed as a price back then.  Interesting.

OK, but where is that land today? I really wanted to go see it and stand there. To know that someone cared enough to come and see his land. Well, very special thanks to Register of Deeds, Glenda Andrea and Kris. They took time out of their busy day to help this stranger from California with a most unusual request on a late Tuesday afternoon in August. They were able to show me on a map of the County where the property was and they gave me directions: Take route 90 East, get off the Exit for Route 45 South. Go to the Golf Course and turn right on road 253 and go 2 miles to road 365 and the property will be on the left. I was surprised to see that many roads don’t have names just street numbers. I missed the golf course the first time but finally found road 253 and drove about 2 miles : 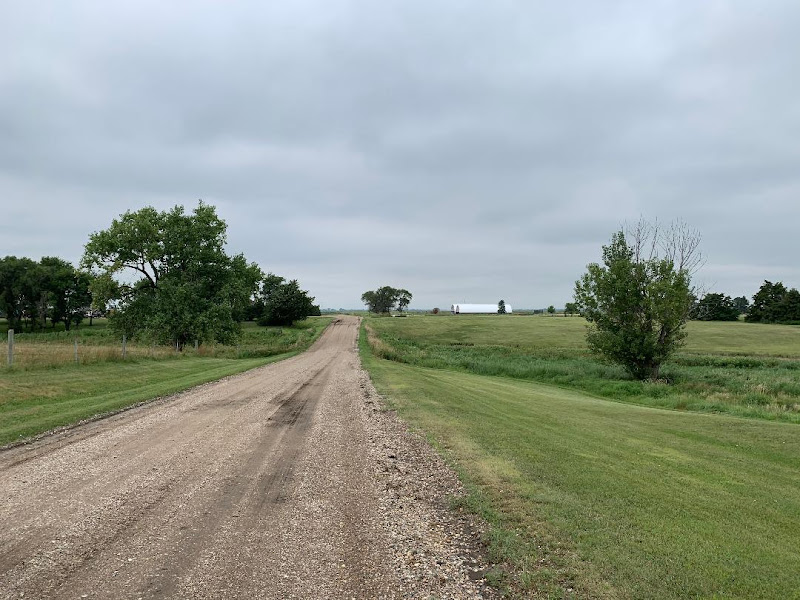 and the road ended. The property is now part of a much larger farm and there are wind turbines off in the distance. Gerald’s section seemed to be vacant but…I found it and this is what it looks like today: 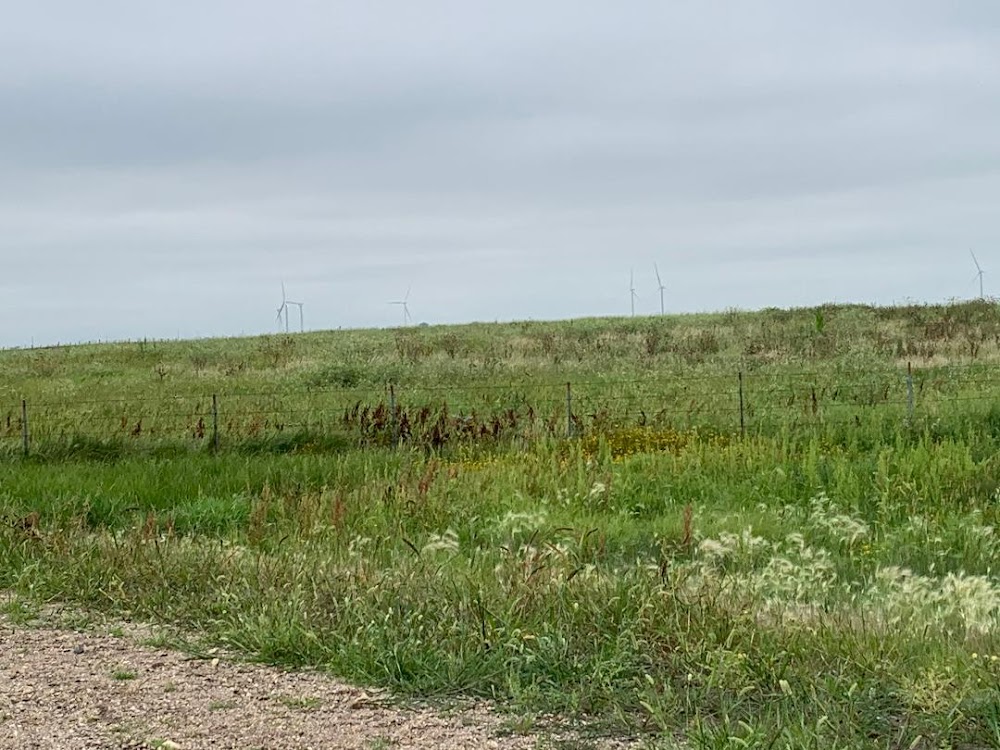 No houses or barns are visible now, but, I found it and stood on Gerald’s land!

I wonder if this picture 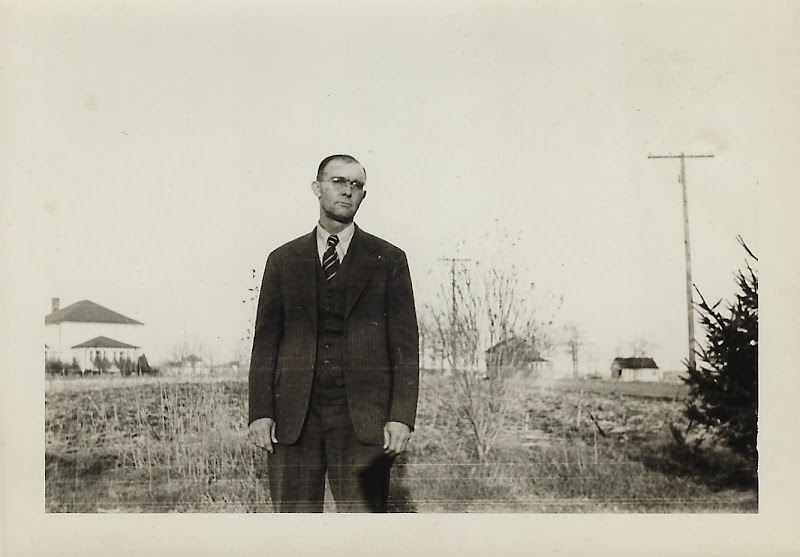 was a picture taken to send back East to family to show his new land purchase? Maybe? I wish there had been buildings to help me determine this. I did get the name of a local historian I can contact. I also applied to get a copy of a death certificate for a Gerald G Warner in Brule, South Dakota to see if this is my great Uncle’s. That may take a while to get. I also need to get a copy of his Will. The office I needed was closed while I was there, unfortunately.  More to follow at a later date.

If you have any corrections or additions or stories to share I look forward to hearing them.Enjoy the journey,Debby