Discovering the Purpose of a Group Photo

Unexpectedly this week I received a small envelope of old photos from my cousin Diane. I am always happy to get any photos I can. As I started looking at the photos I was saddened because there were no names, dates or locations listed on most of the photos. I immediately know that identifying many of the people or the occasion will be impossible. While I may recognize someone in the photo or the location of the photo I will probably never know the reason the picture was taken, unfortunately. What was going on and why did someone want to remember the circumstances around the photo? I always want to know more about my ancestors’ lives and what they did beyond births, marriages and deaths.

One old photo of my paternal grandfather caught my eye. I recognized him and probably one or two of his five brothers but had no idea who the others in this group photo were. I was delighted to turn the photo over and see names written on the back in a handwriting I did not recognize. I still wasn’t sure who the named people were or why the photo was taken.

I started by scanning the photo and the handwriting on the back. When you are scanning photos always remember to scan the backs. Names, locations and even perhaps a photographer’s name (if the picture was done professionally) may be there to offer ideas. 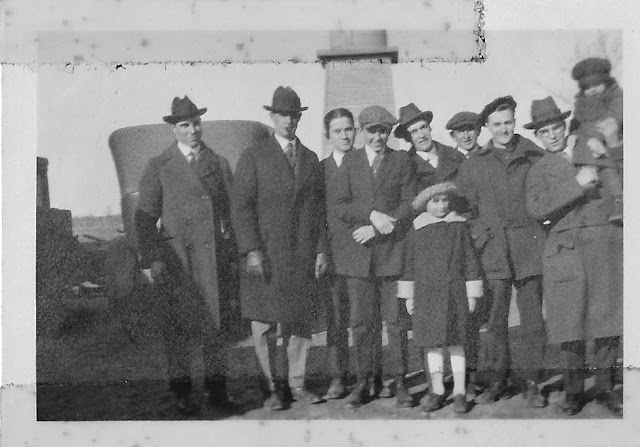 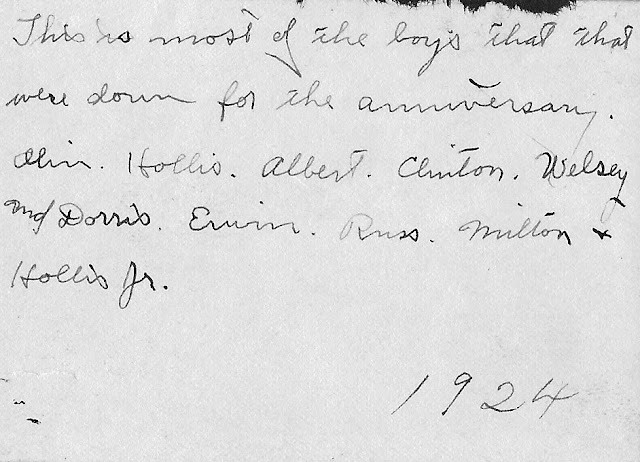 Transcription:
This is most of the boys that were down for the anniversary.
Olin, Hollis, Albert, Clinton, Wesley and Doris, Erwin, Russ, Milton & Hollis Jr.

I decided I needed to get the help of several 2nd and 3rd Warner and Terry cousins to see if they recognized the handwriting and the people. I was confused about the term ‘anniversary’. Was the ‘anniversary’ a remembrance of someone’s death? The photo was dated 1924. My great grandparents John Benjamin Warner and Carrie Terry Warner had died in 1920 and 1910 respectively. My grandfather had a brother Terry Warner who had died tragically in 1921. Was it a remembrance for them? Look for clues in the photo. Oh, the men had overcoats on so it was definitely during colder weather and not June when John & Carrie died. The names of the other people weren’t jumping out at me. Hmm. 1924, what was the significance of that year? I continued to search my family tree database and couldn’t come up with anything of significance for 1924.

I remembered that many important and ordinary events in my paternal family side were memorialized in the local newspaper and that local newspaper is on line. Growing up I remember Mrs. Laura Rogers always calling my grandmother, Agnes King Warner, on Monday mornings to see what our family had done over the past week so it could be recorded in the newspaper. Oh, how important my cousins, siblings and I felt when we found our names in the newspaper. So, I began searching the local newspaper (Suffolk County Historical Newspapers) for one of my great uncles and grandfather for the year 1924 and found 4 items where someone was mentioned. One in particular in The County Review newspaper for 14 March 1924, page 12 seemed most promising. Could this one hold the answers?

This one had four of the brothers mentioned in it. The four brothers were in the picture. They would be wearing overcoats in March on Long Island, New York so that piece also fit. Hollis, Jr. was Hollis and Charlotte Warner’s son who was not quite 3 years old at the time. Hollis Jr. would die before his 11th birthday and there are few remaining pictures of him, so, this is a treasure for his family.

But who were the other people in the photo? If I could figure that out then perhaps that might verify that the newspaper article fit.

I went back to the article. ‘George Billard of Cutchogue’ I knew was a first cousin to the four brothers. George’s mother was Ella Terry Billard, my great grandmother Carrie’s sister. (See Carrie’s Letters) Perhaps she was incorrectly referred to as ‘Mrs. Terry’ in the newspaper since her maiden name was Terry (Ella was alive in 1924) and to denote the connection between the families? This made perfect sense. Now who were the other people in the photo?

Once I knew the family connection I looked at my Terry family names in my Legacy family tree. Forrest Terry was Ella and Carrie’s brother. Oh, maybe ‘Mrs. Terry’ referred to Mrs. Forrest Terry (Theresa Hambler Terry). They were both living in 1924. Forrest and Theresa had 3 children: Clinton (age 15 at the time), Doris (age 7 at the time) and Erwin (age 20 at the time). Looking at the picture the ages seem right. That was it! This is a family photo of the Warner Terry Family Reunion that happened in March 1924! Now I know the purpose of this photo. This photo was commemorating the get together of the Terry sibling (Carrie, Forrest & Ella) descendants!!

After sharing my findings with my cousins one of them sent me the following photo (thanks Suzanne and Marie): 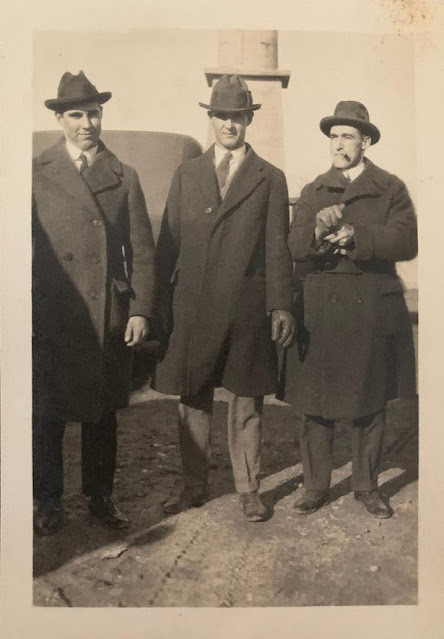 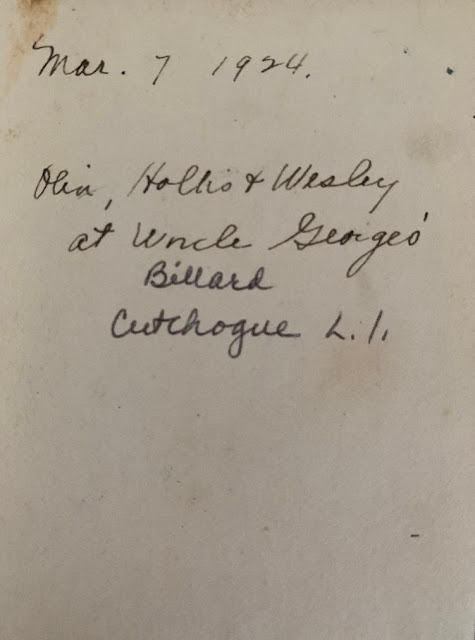 Wow! This photo was taken the same day as the ‘Terry Reunion’. This added the actual date of the get together. This tells another piece of the story. My cousin who had the photo knew it was of the three brothers but didn’t know the purpose/significance of the photo and now she does.

Thankfully, someone wrote on the back of these photos and they survived and came together to show us that the Terry cousins continued to get together over the years even after Carrie & John were gone. The bond was maintained. Today we would have referred to this gathering as a ‘family reunion’ and not an ‘anniversary’. The term threw off my initial thinking. Newspaper articles can be a real help in helping us determine why a group photo was taken.  No matter how many times I carefully read a document it takes going back multiple times to gather all the information possible from even a small news article. This makes perfect sense that they would photograph the children that were there of siblings Carrie, Ella and Forrest Terry. What an important picture now that we know who is in it and why the picture was taken. I so enjoy working with my cousins to put the pieces together. It frequently takes all of our little bits of information together to make another great story about our ancestors. What a fun journey back in time this was!