One of my goals for my Genealogy Road Trip 2020 was to find and stand on my maternal great-great grandfather’s land in Fredonia Township, Plymouth County, Iowa. While traditional searching (see previous posts Finding Jacob Hamman’s Land-First Understanding Iowa Land and Searching for the Will and the Land of Jacob Hamman) on Ancestry, FamilySearch, Bureau of Land Management, etc. yielded no results going to the Plymouth County Courthouse in Le Mars, Iowa this summer allowed me to accomplish my goals of finding and standing on Jacob’s land.

While I knew now  where Jacob’s land was, I wanted to be able to get a copy of his actual land deed. Would this deed give me more information about Jacob and the land? I knew the actual deed would be in Book 5 page 280 of Land Deeds. I have been disappointed before to find the ledger I am looking for to have disappeared or the print in the ledger to be difficult to read. I don’t get too excited until I have a copy of the actual deed in my possession. What would happen his time? 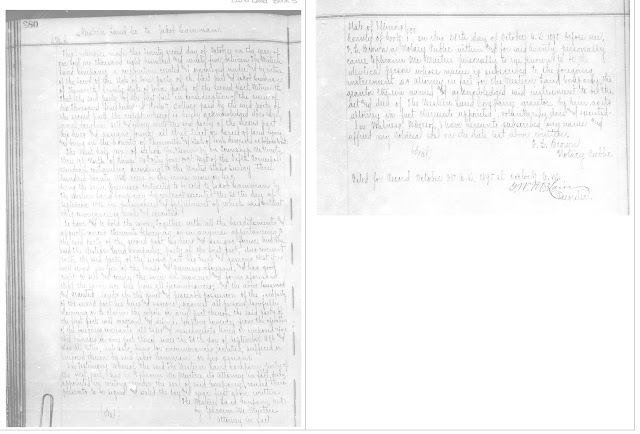 The West half (W ½) of Section No. of the second part this Eleven (11) in Township No. Ninety three (93) North of Range No. Forty four (44) West of the Fifth Principal Meridian containing according to the United States Survey three hundred twenty (320) acres be the same more or less being the same premises contracted to be sold to Jakob Hamman by The Western Land Company by contract executed the 20th day of September 1886 in pursuance and fulfillment of which said contract this conveyance is made and executed.

In testimony, Whereof the said The Western Land Company, party of the first part, has by Ephraim McMurtrie Its Attorney in fact, duly appointed in writing under the seal of said Company, caused these presents to be signed and sealed the day and year first above written.

County of Cook on this 28th day of October A. D. 1895 before me, F. L. Brown a Notary Public written and for said County personally came Ephraim McMurtree personally to me known to be the identical person whose name is subscribed to the foregoing instrument as attorney in fact for the Western Land Company, the grantor therein named and acknowledged said instrument to be the act and deed of The Western Land Company grantor, by him as its attorney in fact thereunto appointed, voluntarily done and executed.

In Witness Whereof, I have hereunto subscribed my name and affixed my Notarial seal on the date last above written.

Some thoughts about this find:

What was The Western Land Company? After doing some additional research I learned that “it was a corporation created and organized under and by virtue of the laws of the State of Iowa". In my previous post Searching for the Will and the Land of Jacob Hamman I have a copy of the ledger which shows this was the first transaction for this piece of land. Everything fits!

As a blogger I like to share my blog posts on Facebook with groups from the area where I am researching. Sometimes you may find a ‘cousin’ you didn’t previously know about, a new source to search for documents or a researcher in the area may find an idea from something I have done that helps them in their research.

I posted my last blogs on the Iowa Genealogy Facebook page. Several people made suggestions or even found a record I previously was unable to find. The following is one such record. (Thank-you Alan Cable for yet another piece of this puzzle.) I have searched Bureau of Land Records for years trying to find Jacob’s land. I have used a variety of spellings and even after finding out the Township, Range and Section numbers I was still unable to find Jacob’s land. This find adds another piece to the puzzle:

Transcription of second listing on page:

I have gained so many pieces of this puzzle about Jacob’s land.  More then just 'land purchased' and dates.  I am very grateful to everyone that helped on this journey!

Now I’d like to know what the ‘covenant’ was and if I can obtain a copy of that?  Any ideas?