In the 1980s my father, Olin Warner, Jr., was given a shoebox of letters. Raymond McKay, a local farmer in Aquebogue who my father had known over the years was getting ready to demolish his family home. This house was where my great grandfather John Warner lived with several of his sons, including my grandfather, after his wife Carrie died. Mr. McKay decided to take one last look through the empty house the morning the bull dozers were arriving. Upstairs in the back of a closet he came across this box of letters. When he realized what they were he decided to give them to my father.

The letters then sat in my father's closet for another 25 years. My father and one of his cousins read the letters over the years. Now I remember my father mentioning the letters at times but I never really paid much attention to them or read them. When I was back East visiting one Christmas, about 6 years ago,  something came up about the letters once again. I asked to see them and finally realized the significance of what we had. What an amazing treasure this was of day to day life mainly in Baiting Hollow (small village about 60 miles east of New York City), New York from 1880-1910. I grew up about 4-5 miles away and was familiar with where my grandfather grew up and a lot of the local family names, the Baiting Hollow Congregational Church, etc.

What a find these letters were! The journey began……
Posted by Debby's Family Genealogy Blog at 6:49 PM 2 comments:

Patrick Hughes, who are you?

I am currently working on trying to figure out who my great-great-great grandfather Patrick Hughes was. Unfortunately, Patrick Hughes is a VERY common name which makes my search even harder. According to my great-great grandmother-Sarah Hughes Rowan's marriage certificate her parents are listed as Patrick Hughes and Susan McKeena residing at 306 10th Ave, NYC. What I know based on what my grandmother Agnes King Warner told me is that Patrick was related to Arch Bishop John Hughes (1797-1864) from New York City. My grandmother talked about her mother-Sarah Rowan King taking her and her sisters to St. Patrick's Cathedral in NY and going down in to the crypt (no longer possible) to view the Arch Bishop's crypt. How was Patrick related?? In looking over many Patrick Hughes immigration records I discovered one record that lists a date of Naturalization of 7 Oct 1852 in NYC with a witness listed as John Hughes of 469 Cherry Street. When did Patrick come from Ireland? In the book "Dagger John" by Richard Shaw the Arch Bishop talks about his nephew Patrick Hughes "one of the young soldiers who gained entry to the regiment's (69th) ranks was Patrick Hughes, John's nephew." Is this my Patrick Hughes? I was able to find a listing of Civil War Draft Registration Records for a Patrick Hughes residence on 9th Avenue, NYC. Patrick was listed as being 43 and a Coal Man. This listing was for 6th Congressional District-Wards 9, 15 & 16. I found 1 listing in the 1850 census for the 1st District, 16th Ward NYC for a Patrick and Susan Hughes. I followed forward from John Rowan and Sarah Hughes Rowan children to find that their oldest son Joseph married Irene. They had 2 children Emily F. Rowan Cuttle and John W. Rowan. 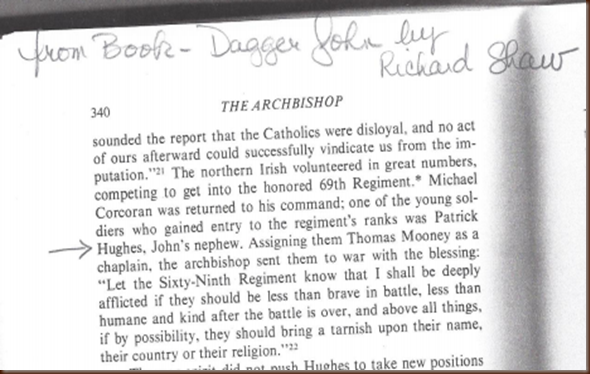 Are you related to them or know anything about them?
Posted by Debby's Family Genealogy Blog at 6:35 PM No comments:

At Christmas time while back East visiting my family, my Dad asked if I was interested in an old cabinet/desk that had belonged to my Grandmother-Agnes King Warner. I told him I was not interested in the furniture but was interested in what might be inside the remaining 2 areas that had never been cleaned out (for about 50 years). My Dad did find a letter that was a genealogist’s dream. In the middle of bridge cards and old Christmas and Birthday cards was a letter from someone named Nelson who was writing to my grandmother about some family history.
Dear Agnes,
I found the paper when I reached home and am forwarding it to you for what you can get out of it. As I recall Uncle Joe was going to bring me the complete list but he never did.
This list has grand pa and out great grand father, and the numbers after their names I don’t know just what they mean. Grand pa was 12 years old when he went to the Civil War which would made his birth year between 1849 and 1853 and de died in 1897 so he would be about 45 years old. The Civil War was 1861 to 1865, now just when he joined the army I don’t know but will ask Mom the next time I see her. Could be that the 45 belongs after grandpa’s name and the 61 after his fathers. William Henry Rowan, his parents, Henry & Sarah Rowan came from County Tyrone, Ireland.
Now Jacob Rowan says 1692, who he was I don’t know.
Admiral Cyrus C. Rowan he was a second grand uncle to us. The admiral had a brother Hy. Rowan.
Noble Rowan lives at Irvington on the Hudson, N.Y. he is a lawyer with offices at 120 Broadway N.Y.C. N.Y. I believe if you care to write to him the information on the other paper he will send you the history-I do not know if it would be a charge for this of it may be free since you are a Rowan.
Uncle Joe said something about the New York Public Library at 42nd Street and 5th Ave N.Y.C. had the People’s History of N.Y.C. and anyone could find this information there.
Let me know if you are going to do anything about it, so, if I can supply you with anymore information I will be glad to cooperate.
So much for the Male Rowans-now lets go to grandma Rowan-she was a Hughes and her brother a Bishop of the Roman Catholic Church and he is buried in St. Patrick’s Cathedral on 5th Ave and 50th Street N.Y.C. I believe he was only three persons buried in the Cathedral. Bishop Hughes – then someone else and the last to be buried there was Cardinal Hayes. Bishop Hughes would be our Grand Uncle and to Gloria he would be her Great Grand Uncle. Did you know about the Bishop?
Love
Nelson
Box 46
Medford Station New York
(second page)

John Willard Rowan 61 Grand Father
(I have him listed as John William Rowan 1846-1897)
William Henry Rowan 45 Great Grand Father
(I have him listed as William Rowan )
Henry & Sarah Rowan Great Great Grand Parents
Co. Tyrone Ireland
Jacob Rowan 1692
Adm Cyrus C. Rowan 2nd Grand Uncle
Bro Hy. Rowan
Noble Rowan Irvington on Hudson N.Y.
Lawyer 120 Broadway N.Y. C N.Y.
Peoples History of N.Y. C.
Now there was no last name and no date but I was ready to go!
In the past few weeks after picking the brains of one of my Dad's cousins (my continuous source of little threads of info that keep me going) and 2 old address books of my grandmother's that have found their way into my possession the search began to move forward.
What I believe to be true at this point is that Nelson is Nelson White, the son of my great Aunt Mary (Mamie)Hughes White and William White. I believe he is the brother of William & Joseph White all of New York. Because of trying to answer the question "Who is Nelson" I believe I also found that my great Uncle Joseph Rowan (referred to in Nelson's letter) was married to Irene had 2 children Emily Rowan and John Rowan. I believe my other great Uncle William Rowan married Mary (perhaps known as Maggie) and they had 1 child William Rowan.
Now because of this search I believe the Joe in the picture of the Rowan cousins (above) is Joseph Rowan born in 1900 in New York City.
Now I need to work on the other 2 in the photo....

Posted by Debby's Family Genealogy Blog at 6:15 PM No comments:

Looking for any immigration/birth/marriage information on Susan McKeena Hughes (born about 1820-1830) and Patrick Hughes (born about 1820-1830). I believe they arrived in New York City before 1847 and came from Ireland. Listed as the parents of my great-great grandmother Sarah Agnes Hughes born in NYC about 1851 on her marriage license to John Rowan. 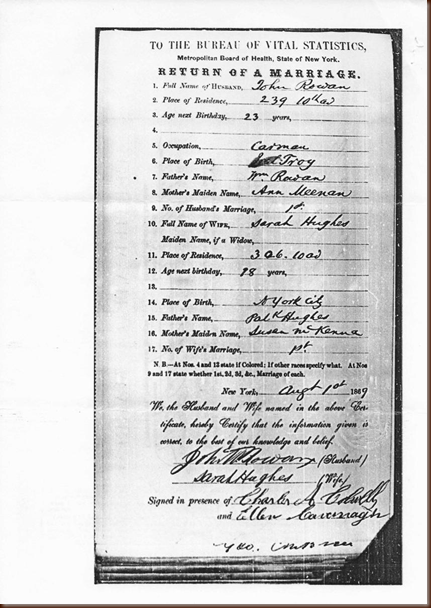 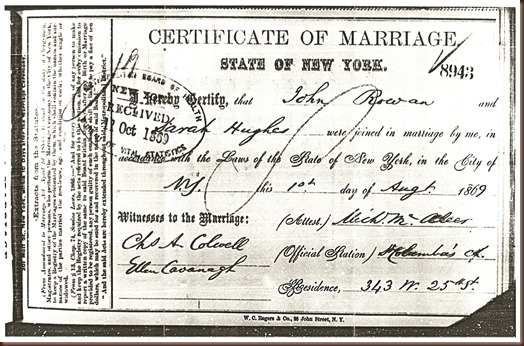 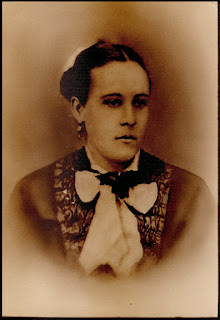 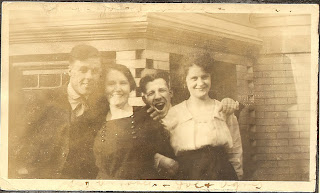 Rowan Cousins
This photo of ?, ?, Joe and Agnes (Agnes King) is believed to be a photo of my grandmother and her Rowan cousins in Brooklyn, NY about 1920s.

Posted by Debby's Family Genealogy Blog at 5:35 PM No comments: