Celebrating the Marriage of Sarah Rowan and George Washington King 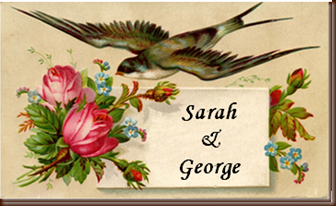 My paternal Great-Grandparents were married on this date 121 years ago in 1897.  While not a wedding photo, this is the earliest photo I was able to find: 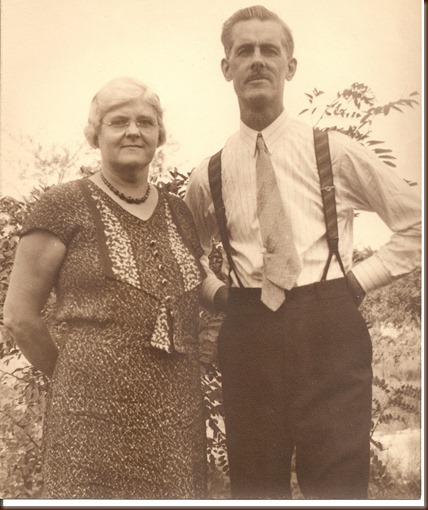 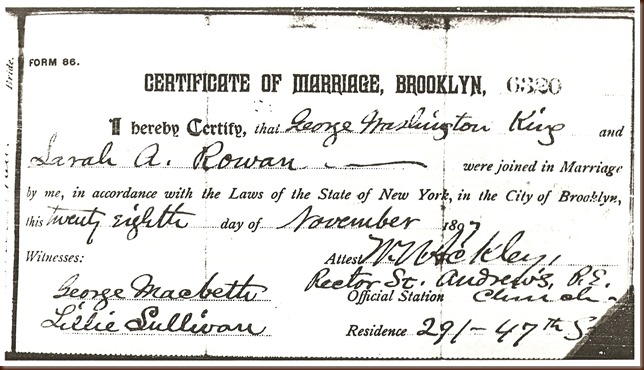 Certificate of Marriage, Brooklyn,
I hereby Certify, that George Washington King and Sarah A. Rowan were joined in Marriage by me, in accordance with the Laws of the State of New York, in the City of Brooklyn, this twenty eighth day of November 1897. 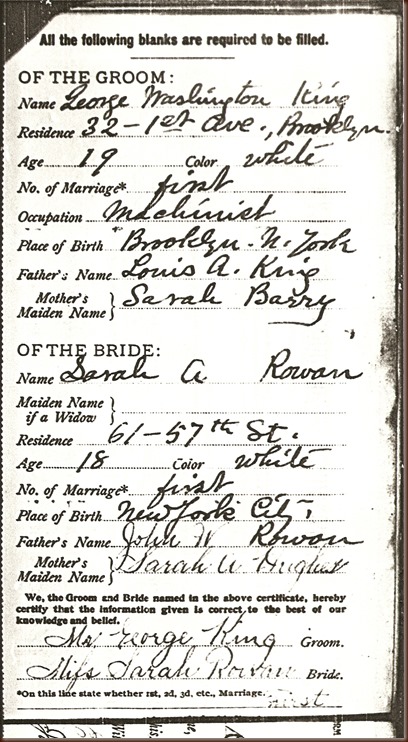 
At the time of their marriage, George’s father and both of Sarah’s parents were no longer alive.  Sarah’s father had died just 9 months earlier.  George’s mother, Sarah Barry King, was the only parent alive.  Was she at the wedding of George and Sarah?  I looked at the names of the witnesses and don’t recognize the names as family members. I wonder if they were friends of the bride and groom or distant family members?

When I reviewed the blog post What can you find in Grandma’s Scrapbook? about George & Sarah’s 50th wedding anniversary, I do see in one of the newspaper accounts, the name Mrs. Mamie MacBeth.  Is this the wife of witness George MacBeth?

Searching and searching for information on St. Andrew’s yielded no results. I was only able to find several references to the Rector listed on the marriage license, in The Churchman, a Weekly News-Magazine in 1897:

In the article about George and Sarah’s 50th anniversary I can see that they were remarried by Rev. Robert B. Hall of St. Andrew’s Church. So, I know that the church was still around in 1947 when they celebrated their anniversary.  I decided to go to Google Maps to see if the church is currently there and found: 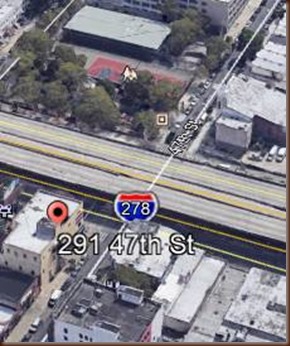 I wonder if the church was torn down to make way for Interstate 278- the Gowanus Expressway? The Gowanus was originally started in 1939 and widened from 4 to 6 lanes between 1958 and 1964. Unfortunately, there is no church for me to visit.  I wonder if I will one day be able to find a photo of the church?


If you have any corrections, additions or stories to share I look forward to hearing them.
Enjoy the journey,
Debby 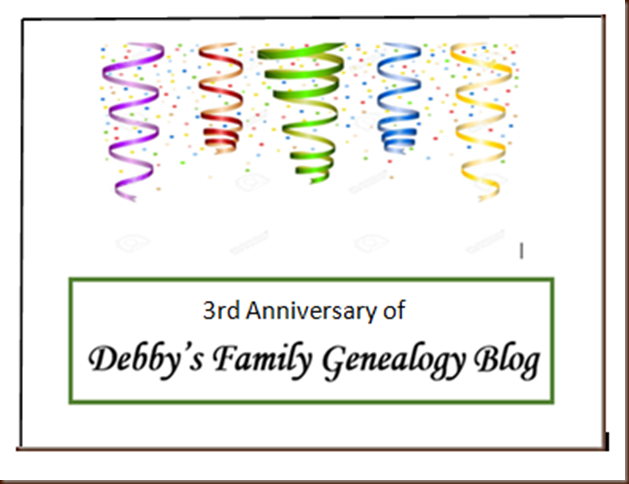 A look back at the last year-
A review of my posts for this past year shows:
Research Accomplishments:

Honors:
What I’ve learned:
My goals for this next year:
My frustration continues to be that there never seems to be enough time and money to do as much research as I want.

A VERY SPECIAL THANK-YOU TO ALL MY READERS!  I enjoy the comments you make and/or questions you ask.  I’m always looking for new directions to search or information that is questionable and needs verification. 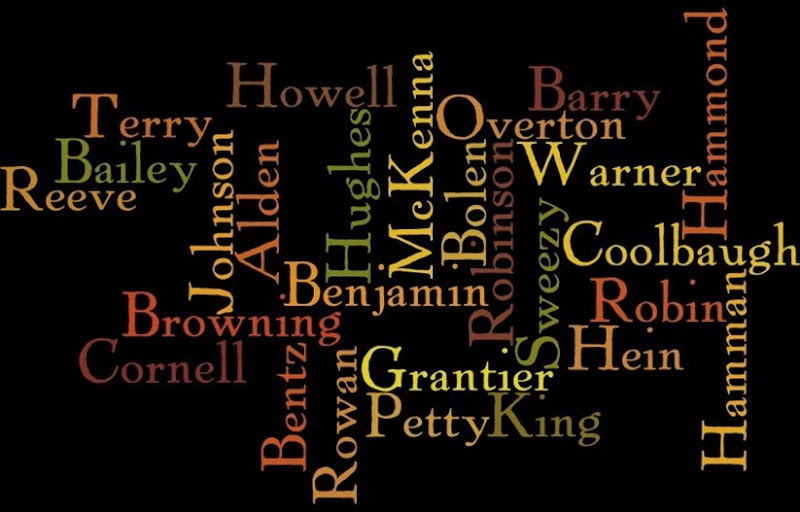 Another great year for me as a blogger.  Looking back shows me I have accomplished more than I thought I did.  On to new discoveries and new cousin connections while also enjoying the great ones I have already made :)

Gena Philibert-Ortega presented 2 informative talks Saturday at the San Diego Genealogical Society.  Gena is an author of articles and books, speaker, blogger and genealogist with an emphasis on researching women’s history and lives.  Gena kept us engaged with examples of some of the interesting things she was able to find out about women.  Throughout both presentations Gena reminded us that researching our female ancestors is different then researching our male ancestors.

Gena showed us some great examples of how events in our ancestor’s lives produce a variety of sources of information that we may not have thought of.  Gena talked about using genealogy databases, vital records, libraries/archives, digitized books/articles, using finding aids and relationships to locate information.  She also talked about not using the general ‘search’ options within databases but to search for a particular ‘type’ of record and then search within that record. 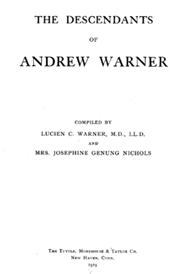 Gena’s second presentation was entitled Her Name Was Not Known: Researching Your Female Ancestor’s Life.

During Gena’s presentation she talked again about how elusive our female ancestors may seem but we can still find out so much about them if we know how to search.  She discussed the five aspects of a Woman’s life that need to be considered when you are researching to help develop a better understanding of your ancestor: the woman herself, her family, the locality where the woman lived, the time period she lived in and information about her neighbors and community (FAN club-friends and neighbors).  When searching have a list of Keywords to search, such as all the variations of a woman’s name, a location, etc. and search each one.

Gena gave us some amazing suggestions for searching for women by the records that were created around their lives.  Already I am realizing first hand that women’s records and information about their lives are available just not in the same way we search for our male ancestors.  Gena reminded us that “Thinking outside the proverbial genealogy box will assist you in finding clues to those ancestresses lives.”


Be sure to check out Gena’s website Gena-Philibert-Ortega and her blog Gena’s Genealogy.  Gena has authored the books From the Family Kitchen: Discover Your Food Heritage and Preserve Favorite Recipes  and  Cemeteries of the Eastern Sierra.

In the summer I was able to locate a Will for a Daniel Petty in Suffolk County, New York that while copying, thought was probably the correct one.  I was looking for Hannah Petty Warner’s father.  This is getting back to the late 1700s and records are scarce, to say the least.  Somehow, I knew that Hannah Petty Warner had a father named Daniel Petty.  Unfortunately, this was before my days of citing my sources.  I believe I found the information on a Family Search tree about 20 years ago. As I tried to figure out if the Will was for the correct ancestor, I decided I should take a step back and see what I could first find out about his daughter Hannah.

At the Suffolk County Historical Society in Riverhead, New York I was able to find copies of pages from the Cottage Bible that belonged to David Warner and then his son David T. Warner.  David Warner was one of the 10 children of Daniel & Hannah Warner and brother of my ancestor James Warner.

On the pages I find the following: 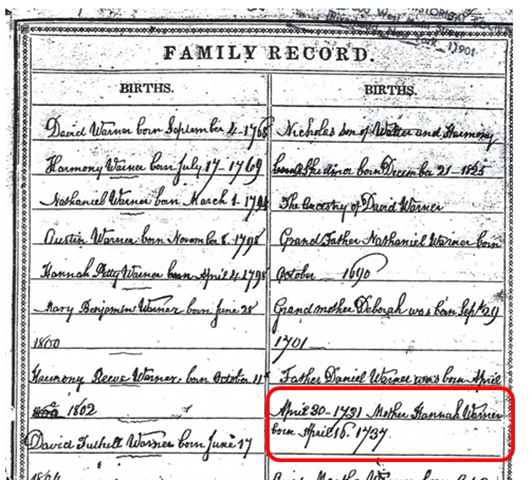 Hannah was born 16 April 1737, I believe to Daniel and Hannah Paine.  I have no other record of her birth other than this account written in the Family Bible by her son David.

Hannah, her husband Daniel, and her family lived through the Revolutionary War.  What must life have been like for them?  How did they survive?  From the book A History of Mattituck by Rev. Charles E. Craven, I learned:
Hannah died 19 July 1814 at the age of 77 years.  Hannah is buried in Jamesport, Suffolk County, New York. 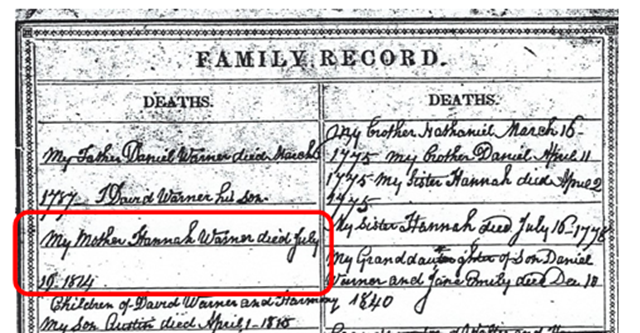 There were no newspapers at the time of Hannah’s death so there is no Obituary to further tell her story.  The Church records of the time reprinted in Craven’s book begin with Baptisms in 1751 (after Hannah’s birth) and the Death records end in 1809 (before Hannah’s death).  Thank goodness the family had a Bible to record the life events of the family for without this it would be difficult to know of this early family history.

If you have any corrections, additions or stories to share I look forward to hearing them.
Enjoy the journey,
Debby
More about the Will I located for Daniel Petty next time.
Posted by Debby's Family Genealogy Blog at 5:10 PM No comments: