While researching my paternal ancestors I learned that several (Mary King, Louis and Sarah Barry King, Louisa King) are buried in Green-Wood Cemetery, in Brooklyn, New York.  (Click on individual names to go to posts about their lives.)
What additional information might I be able to find out about my family by obtaining records the cemetery might have?  What records would a cemetery have?

First, I needed to learn about the cemetery:

Green-wood Cemetery
The Green-Wood Cemetery my ancestors are buried in is located in Brooklyn, Kings County, New York.  This cemetery was one of the first rural cemeteries in America when it was founded in 1838.  The earliest burial dates to 1840.  The cemetery grounds encompass 478 acres of hills, valleys, glacial ponds and paths.  While being one of the oldest and largest cemeteries in the United States it also has the largest collection of 19th and 20th century statuary and mausoleums.  Green-Wood Cemetery was designated a National Historic Landmark in 2006.  The Battle of Long Island was fought across what is now the grounds of Green-Wood Cemetery.  It was also designated a Revolutionary War Historic Site.  Currently there are over 560,000 people buried there.  Greenwood Cemetery states that in 1866 the New York Times said “It is the ambition of the New Yorker to live upon Fifth Avenue, to take his airings in the [Central] Park, and to sleep with his fathers in Green-Wood.”  This statement from the New York Times is interesting to note because within 20 years of this article my ancestors would begin being buried there.

I contacted Green-wood through their “Green-Ealogy” department and was informed that this is the listing of all those buried in the plot and grave where Mary King is buried:

Next, I looked at the list to see what I could determine about the people in the grave:

Then I thought about what I didn’t know:

Finally, I decided it was time to pay Green-Wood Cemetery for copies of records they have on the people in this grave.  Would I be able to find out who Caroline, Frank and Lilly were and why they were buried with Mary?

I tried to wait patiently and finally the email came with the information I had been waiting for: 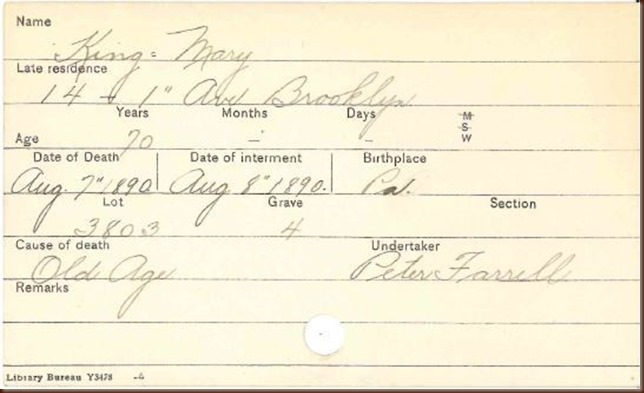 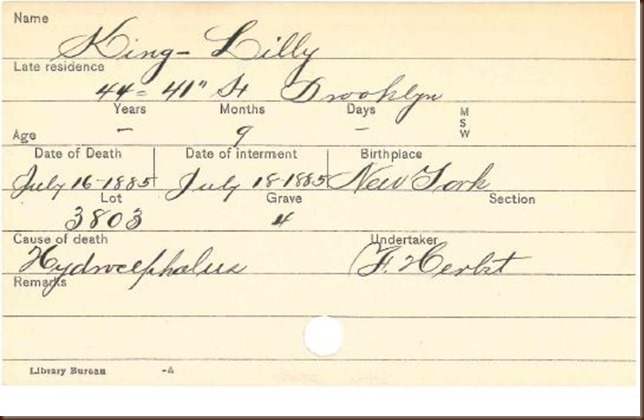 I needed some perspective, when looking at the death of such a young child, and found the following in the Brooklyn Daily Eagle newspaper 3 July 1885 on page 3: 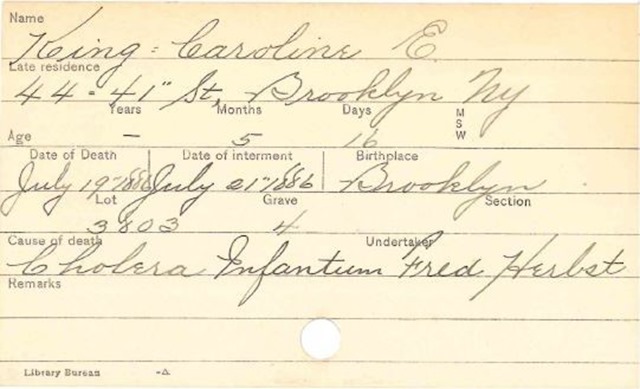 From the Brooklyn Daily Eagle 27 Jul 1886 page 4:
“ The Death Rate Decreasing
Report of the Health Department for the Week Past 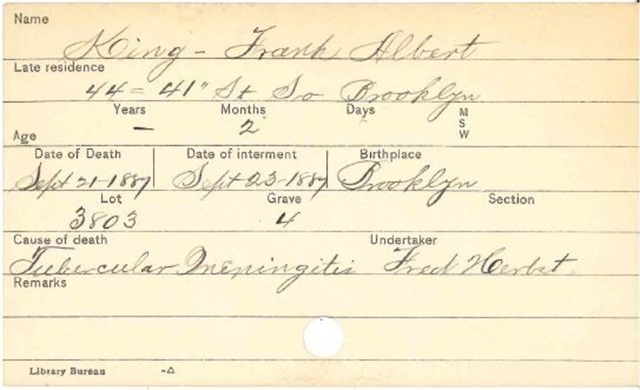 The closest Health Department Report I was able to find was in the Brooklyn Daily Eagle 20 May 1887 page 1:

Follow-up:
By obtaining the records from the cemetery I learned about 3 children I never knew existed.  They did not show up on the Federal Census records because they died in the 10 year gap between censuses.  Don’t forget to check places where other records exist!

If you have any corrections, additions or stories to share I look forward to hearing them.
Enjoy the journey,
Debby
Posted by Debby's Family Genealogy Blog at 3:51 PM