The Missing Rowan Children–Who Were They

Several years ago I was trying to determine where one of my paternal great-great grandmother’s, Sarah Hughes Rowan, was buried. There was a lead that she was buried in a Roman Catholic Cemetery on Long Island. I knew, after finding Sarah’s death certificate at the New York City Municipal Archives, that she died on 17 August 1885 at Presbyterian Hospital in New York City and her address was listed as 2007-2nd Avenue in New York City. The deed holder for the grave is listed as John W. Rowan (Sarah’s husband). In 2009 I was able to obtain a copy of the grave register for Calvary Cemetery, grave #13 that proved Sarah was indeed buried there as I had guessed. 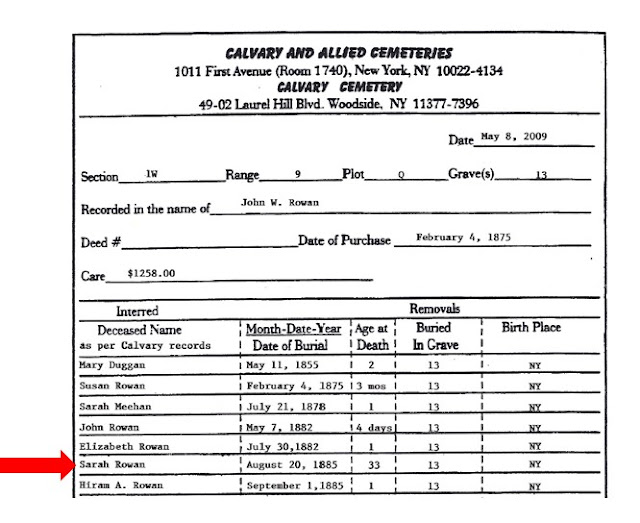 One puzzle solved. What I did not expect to find was six other children buried there with Sarah. Wait, I only knew of the four children who lived to adulthood- Joseph, William, Mary (Mamie), and Sarah (Sadie), my great-grandmother. Who were these children and were they all related? I began to search death records for New York City and found some more pieces of the puzzle. Then recently while searching Roman Catholic Church records in New York City on Find My Past I was able to put several more of the pieces together and determine who five of the other children were. I started with the children, surname Rowan, thinking they might be children of John and Sarah Rowan.

Hiram Rowan:
In searching Death Records for New York City, I was able to find a death certificate for Hiram A. Rowan: 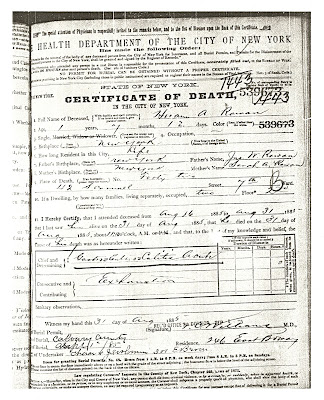 
These four children are now known as children of John W. and Sarah Rowan. So, now I have a revised list of Sarah and John’s children:

That tells me about the four Rowan children on the list at Grave #13. I know they were John and Sarah’s children. That doesn’t answer the question of who are the other two children: Mary Duggan and Sarah Meehan. John’s mother was a Meehan so was she a relative? John’s only known brother died as an infant. Definitely more research to do on these two girls. I am also curious about the different locations of the baptisms of the children. Did the family move around New York City a lot? Are these still functioning parishes? Who were their sponsors and what were their relations to John and Sarah.

Always remember to get cemetery records and search to find the connections of others buried in the same grave.  If I hadn't gotten a copy of the grave record I would never have known about these children.