The History of the Warner Homestead

Do you enjoy going to places where your ancestors lived? Walking in their footsteps, so to speak. I always enjoy doing this when I can whether it is visiting the Alden homestead in Duxbury, Massachusetts, walking through a church in lower Manhattan where my ancestors were married or going through a home they once lived in. I try to stop and imagine them being there whether it was working in the fields, sitting at a table or walking down an aisle. Unfortunately, there are no videos or even pictures for me look at so it is all imagining in my mind. What does the space feel like, how close does it look today to what it did back then?

A few years ago I had the amazing privilege of walking through the house where my paternal grandfather, Olin Warner, Sr., was born and lived for about the first 10 years of his life. The home has remained in the Warner family since my great-grandfather John Benjamin Warner acquired it until now. The home was a mere three or four miles from where I grew up. I knew it was there, I knew my grandfather had lived there but somehow I just never made it inside the house until recently. What year was the original structure built? How much of the current house is still the same?

First, some history of the land and the house:
Nathaniel Warner, my paternal 6th great grandfather, was the first of this line to live on Long Island. Nathaniel and his son Daniel lived in Southold town.

James Warner, Daniel’s son and my 4th great grandfather is the first to have settled in the area of Baiting Hollow, New York on Long Island in the later 1700s moving about 20 miles west of Southold, New York. I believe James’ father Daniel Warner and his mother (Hannah Petty) may have been living closer in the Aquebogue area, at the time. I have searched for hours and hours and have been unable to find land records for James’ purchase of land in Baiting Hollow but I do find his property referenced in neighbors’ land deeds for the area. I believe that James and Gloriana (Edwards) were in the area by 1784 when my 3rd great grandfather Daniel was born.

Daniel stayed in the area, married Jemima Benjamin and raised their family there. Many of their children and grandchildren also lived in the area. Unfortunately, it is difficult to tell from numerous land records and wills when this particular house was built. Land records of this time period only mark the boundaries and the acreage and do not list specific dwellings on the property. Daniel and Jemima had 3 sons: Daniel, Lewis and Goldsmith. When Daniel Sr. died in 1857 his will states “I give and devise to my son Lewis all the rest of my said farm lying both sides of the North road a highway.”

Then, according to the 1858 map Daniel has two pieces of land and his brother Lewis has one piece. (I used School District #3 as a reference point in the maps.) 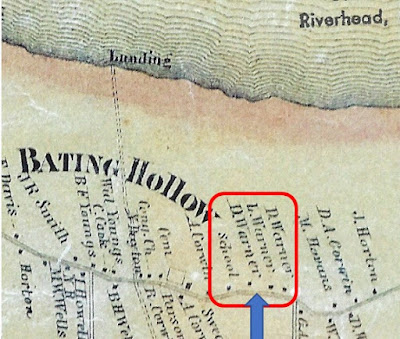 According to the 1873 map of the area all 3 sons appear to live right next door to each other. I wonder if Goldsmith bought Lewis’ land at some point? The land on the 1858 map seems to have been where Lewis previously lived. 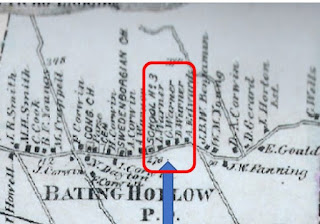 I believe that the house, that I am referring to as the Warner Homestead house, that my grandfather was born in, was owned at some point by Daniel Sr.’s son Goldsmith Warner. According to an 1874 Assessment Role I know that Goldsmith owned 90 acres of land, Daniel owned 150 acres and Lewis owned 136 acres. Goldsmith left property to his nephew, my great grandfather John, and I believe the house was on this property.

After the sudden death of my great grandmother, Carrie Terry Warner, in 1910 John moved to Aquebogue, New York with several of his sons, including my grandfather Olin. In January 1915, John sold this piece of his Baiting Hollow property, which I believe contains the Warner Homestead, to his brother Eugene. 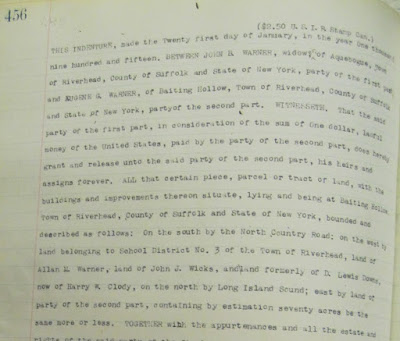 I’m not exactly sure, yet, how the property and house transferred from Eugene to his grandson and current owner Dewitt Young Warner.  I would still like to trace the land within the family from, I believe, Lewis to Goldsmith and Eugene to Dewitt. I wonder when Goldsmith came in to possession of the property? There is definitely more searching to be done.

Putting together the history of the land, and probably the house, took hours of reviewing and the piecing together of research that I had already done for individual members of my family. Since houses were not specifically mentioned in land deeds Wills and Tax records added valuable information. The search is rarely a straight line with an easy trail to follow.

Now that I know the general history of the land since the late 1700s it’s time to see the inside of the house as it is today.  Next time…